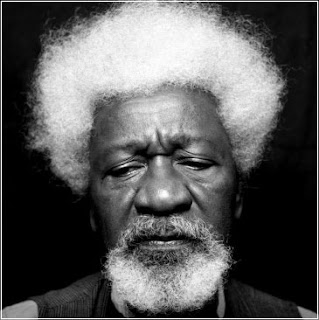 Akinwale Oluwole Soyinka holds the distinction of being the first African winner of the Nobel Prize for Literature. His works, which have encompassed drama, novel and poetry genres, have tended to reflect the syncretism of Yoruban culture and the subversive instincts of his Egba heritage; traits which also marked the career of his famous musician cousin Fela Anikulapo-Kuti.

With his distinctive bushy Afro and fulsome goatee, whitened over the course of time, Soyinka's physical appearance, cutting the seemingly contradictory figure of a free spirited eccentric with the stentorian bearings befitting an academic, has often been matched by the deeds of the man: one whose facility with the complex usage of formal language is distilled through an engaging acerbity and an often indelicate witticism.

Rebellious, raffish, and something of a loose canon, he is not unlike his contemporaries Chinua Achebe and Ngugi Wa Thiogo; much of his work having been steeped in observations and analysis of Africa's colonial heritage and post-colonial woes of despotism.

He was born in 1934 to a solidly middle class family in the Western Nigerian city of Abeokuta; the bastion of the Egba sub-group of the Yoruba. Although brought up as a Christian, his life and works have consistently demonstrated a pre-occupation with Yoruba mythology.

His higher education began in 1952 at Government College, Ibadan. In 1954, he left for England to study at the University of Leeds and completed his first degree, a BA in English Literature, in 1957. During his sojourn, Soyinka worked as a dramaturgist at the Royal Court Theatre in London. He busied himself making contacts and associations with people in the arts world and wrote his first plays including a light comedy, The Lion and the Jewel.

Returning to Nigeria, after six years, Soyinka began studying African Drama, a devotion he was able to focus upon as a result of the award of a Rockefeller bursary. It enabled him to embark on an attempt at merging Western and Yoruba theater traditions.

To this end, he founded an amateur dramatic ensemble called 'The 1960 Masks', and four years later the 'Orisun Theater Company,' which produced his plays, most of which he directed and in some of which he took acting roles. He pursued these endeavours while holding teaching positions at the Universities of Ibadan, Lagos and Ife.

Yet, these immersions in both the arts and academia were not the total ambit of his range of expression. Increasingly, Soyinka began to apply himself within the maelstrom of Nigerian post-independence politics.

Much of the dangerously conflictual nature of political life in the country was manifested in his native Western Region; strife-ridden and unstable because of an intensifying rivalry within the ruling Action Group party led by Obafemi Awolowo, and his deputy Ladoke Akintola.

In 1965, Soyinka was falsely accused of entering the broadcasting house in Ibadan to force a producer to play a pre-recorded tape at gun point. He was subsequently imprisoned, but later released, due in part to an international campaign led by Western artists such as Norman Mailer.

Soyinka's political activism included a vain attempt at brokering a peace between the secessionist state of Biafra and the federal government of Nigeria. He was imprisoned in 1967 by the military leader, General Gowon, and released in 1969. His recollections of his incarceration, much of which was spent in solitary confinement, would be published in his work, The Man Died.

Soyinka inaugurated successive decades with two popular plays heavy on sacarcism: The Trial of Brother Jero (1960) and Madmen and Specialists (1970). The 1970s was a welter of creativity. More of his plays including Death and the King's Horseman (1976) were staged internationally, and a film version of his novel Kongi's Harvest was produced. He also took up several academic appointments abroad.

Still, politics remained at the fore of his activities. Whether it was criticising the corruption of the Nigerian military or the tyranny of African despots or the inhumanity of apartheid, Soyinka was in his element; his abiding concern being: "the oppressive boot and the irrelevance of the colour of the foot that wears it."

It was a principle that he held to when campaigning against the dictatorship of General Sani Abacha in Nigeria from where he was forced to flee in 1994, although many felt him compromised when soon after his 1986 award of the Nobel Prize, he accepted a position as chairman of the Road Safety Corps which had been created under the auspices of the regime of Abacha's predecessor, General Ibrahim Babangida.

Before this, Soyinka's personal pleas for clemency on behalf of Mamman Vatsa, a soldier who was also a published poet, proved futile, and Vatsa was shot before a firing squad for participating in a coup which many now acknowledge to have been non-existent.

Soyinka continues to play the roles of an academic and political activist. His most recent chairs have been in the United States while in Nigeria he has served as a key member of PRONACO (Pro-Sovereign National Conference Coalition); a group seeking a national conference to determine Nigeria's political future. He also travels widely on the lecture circuit. In 2007, he published a memoir, You Must Set Forth at Dawn, the completion of his earlier works, Ake: The Years of Childhood, Isara: A Voyage around 'Essay, and Ibadan: The PenkelemeYears.

Be it as playwright, lecturer, social critic, or raconteur, Wole Soyinka has consistently enlightened and challenged through the creative use and calibration of language; a special skill acknowledged by the award of the Nobel prize and encapsulated in the words of the awarding Swedish Academy by their reference to him as one "who in a wide cultural perspective and with poetic overtones fashions the drama of existence."