Book Review of Chinua Achebe’s THERE WAS A COUNTRY: A Personal History of Biafra 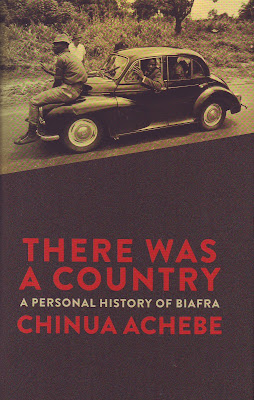 The importance of the pen, the brush and the voice of the artist as a social critic and as an interpretive lens to focus on the intricacies as well as the banalities of inter-human conflict may or may not carry less weight than they did in distant and not so distant past.

This of course is a question of perspective; but even in the age of the saturation coverage of wars and insurrections by the apparatus of the mass media, the nuanced touches provided by the evocative poet and the erudite writer can give new dimensions of insight into the background, the evolution and the effects of the wars waged by mankind.

Certainly those artists whose works have profoundly captured the imagination and which have been indelibly marked in human memory thus becoming part of the general narrative of historical consciousness have consistently spoken of the inherent baseness of wars: its infliction of mass suffering and its capacity for unleashing the demonic qualities that lie dormant in men.

The destructiveness inherent in war; the anti-thesis of the creative impulse of the artist has frequently cast the artist as being anti-war. But while Pablo Picasso’s monumental Guernica, the depiction of a Nazi air raid on a Basque city during the Spanish Civil War, projects the pacifist’s angst at the evident traumas induced on a wretched and defenceless civilian populace, the role of many an artist has not been confined to one of conscientious neutrality. There are those who have used their talents to extol the virtues of patriotism and the valour inherent in sacrificing self in the cause of the nation. There are those who have taken unambiguous stances for both belligerence and for resistance.

The Nigerian Civil War fought between 1967 and 1970 was a war which engaged a number of figures drawn from the nation’s cultural life. The dramatist and later Nobel Laureate, Wole Soyinka, made efforts geared towards creating what he termed a ‘third force’ for compromise as the fractured nation hurtled inexorably towards a military showdown. He was jailed for his troubles by the military regime of General Yakubu Gowon.

Another figure, one not widely known outside of literary circles, but whose status has grown in succeeding decades, the poet Christopher Okigbo, was not content to remain in civilian life and joined a regiment of the secessionist army of Biafra. He met his death at the age of 37; an ending which inspired the Kenyan academic Ali Mazrui to indict Okigbo for “wasting his talent on a conflict of disputable merit” in his work The Trial of Christopher Okigbo. “No great artist,” he argued, “has a right to carry patriotism to the extent of destroying his creative potential.”

For Chinua Achebe, author of the seminal work Things Fall Apart, the Nigerian Civil War was one in which he had no choice but to involve himself. As he explains in his book There Was a Country: A Personal History of Biafra, the integration of art with the community in traditional African society formed the basis of his war time ambassadorial role in promoting an international awareness of the plight of the short-lived Biafran state which was composed in the main of people of his Igbo ethnicity; a people who had endured a series of pogroms in the lead up to the war.

Achebe was in the vanguard of those artists who although initially absorbed with writing about the effects of colonial society on the African psyche would later become pre-occupied with the events in post-colonial Nigeria, events which took on increasingly dysfunctional turns.

Indeed his fourth novel, the unerringly prescient A Man of the People, ends with a military coup, an event which for the first time took place in Nigeria at the time of the book’s publication and which served as a trigger that would lead to a concatenation of violence: communal massacres, a second army mutiny and finally an armed conflict replete with the brutal instruments and cynical policies of warfare.

It is a war which was widely covered by Western correspondents and produced books by the likes of John De St. Jorre and Frederick Forsyth, who in contrast to De St. Jorre’s attempts at an even-handed approach was an unabashed polemicist for the Biafran cause.

The writers Arthur Nwankwo and Samuel Ifejika also contributed an important book during the war, and later in the re-united Nigeria, as taboos associated with dredging up the past began to relax, a plethora of books authored by former stalwarts of the Biafran military machinery created an industry of memoirs.

Younger generations of Nigerian writers such as Chimamanda Ngozi Adichie have used the war as a backdrop to their work. Achebe for his part although far from reticent about the ills which continue to plague Nigeria confined expressions of his war time experiences to poetry writings; twelve of which are interspersed at intervals in this his long awaited memoir of his wartime experiences.

The war of course remains a sensitive issue in Nigeria for a great many reasons; the narrative remains a contested one, but in the minds and the hearts of many Igbos who have for long claimed to be marginalised from the centres of power and influence, it signified more than physical and material defeat: It was a wholesale destruction of the spirit; of the post-Independence-era zeitgeist of optimism and aspiration in a society still operating with some semblance of meritocratic values. Defeat represented the extirpation of all that they considered to be morally right and just.

Achebe’s book works around this central thesis: The Igbos were the willing acquirers of Western culture and that the synthesis with their pre-existing cultural mores of what he considers to be their ‘individualism’, democratic ethos and competitive spirit enabled them to supersede other ethnic groups in the British created colonial order. This led to tensions and their subsequent removal from positions of leadership by forcible means which included a strategy of ethnic cleansing.

For Achebe, the importance of the civil war had profound consequences which went further than the territorial borders of Nigeria. It was he argues “a cataclysmic event which changed the course of Africa.”

In his typically direct, uncluttered style Achebe weaves a compelling literary reportage of roots which were embedded in an ancient society existing within a colonially imposed order and how that cultural dialectic shaped him and the wider destiny of his people within the multi-cultural potpourri of the conglomerate state of Nigeria.

The dramatis personae of the era, their backgrounds their motivations and his critique of their respective roles at this most critical of periods are laid out: The rival colonels Yakubu Gowon and Odumegwu-Ojukwu; the leader of the Yorubas, Obafemi Awolowo, as well as key military and political figures on the Nigerian and the Biafran sides.

Achebe also considers the role of the wider world in a conflict which in his view was influenced foremost by the necessities of realpolitik  and not by the objective application of moral standards.

But for all the moral weight behind it and sympathy that the plight of the Igbos engendered, one of the key criticisms of the Biafran enterprise was that its leaders did not provide a clear and distinct idea platform to serve as a template for the rest of Nigeria and the African continent other than one which was dominated by a tribal group seeking self-determination.

The Nigerian Civil War has been typically viewed as one permeated by the ultimate reality of naked tribal interests in conflict and not as a battle of ideas. Achebe attempts to redress this by addressing the motivation behind the Ahiarra Declaration of 1969 which he describes as an attempt aimed at expressing the “intellectual foundation” of the new nation of Biafra.

The effect of the declaration on world opinion at the time was limited and in certain quarters, it was derided as an ill-sorted hodge-podge of ideas and intentions. But the task of evolving a fundamental core of ideas and precepts aimed at transforming an ex-colonial, multi-clan group into a self-constructed modern nation deserves the sort of considered attention Achebe’s book is not able to fully explore.

Granted, Achebe’s explorations do take account some of the philosophical and cosmological constructs of the pre-colonial Igbo and the effect these have had on the Igbo psyche in the modern world. But a consideration of the efficacy of Igbo nationalism and the collective identity of the people must acknowledge to a greater degree the historical record.

From the Igbo-Biafran perspective there have been few if any truly introspective works which have considered the viability of a Biafran state from the point of view of the historical reality that there was never a united Igbo nation which operated as a cohesive national entity. A study of the period before colonial conquest reveals not a united kingdom of Biafra but an aggregate of disparate villages and hamlets whose communities became steeped in the conduct of the brutal trans-Atlantic slave trade.

The argument that by the dawn of the colonial era, the Igbos had not evolved to a feudal level of social organisation and developed attendant indigenous institutions of governance, akin to say to that of the neighbouring Edo people, may of course be met with a riposte that the social organisation practised by many Igbo communities manifested a form of ‘republicanism’ and ‘individualism.’

But whatever the interpretation given to the underlying nature of the relative sophistication of these descriptions, the reality was that tensions arose during the civil war between Igbo-Biafrans based on their places of origin as indeed they did with the non-Igbo minorities within the borders of the former Nigerian Eastern Region without whose acquiescence the Biafran project was doomed to fail.

The unity of the Igbos based on their collective fortune as a successful people in the post-colonial order as well as their ill-fortune through the trauma of pogroms and abuse, understandably provided the strong, emotionally grounded impetus to create a separate nation. Nationalism, a concept that is inherently grounded in the practice of self-invention, can be a force for self-transformation. But while emotion may serve as an excellent form of petrol, it is, in the final analysis, a poor engine.

That said, Achebe has produced an extremely readable personal history in which he provides a masterful series of vignettes that greatly sensitize the reader to the struggles, the triumphs and the tragedy of the artist and his people during an era of rapid change and great turbulence.

Adeyinka Makinde is the author DICK TIGER: The Life and Times of a Boxing Immortal, the story of a Nigerian world champion boxer of Igbo ethnicity who became embroiled in the Biafran War. His latest book is JERSEY BOY: The Life and Mob Slaying of Frankie DePaula.
Website: http://adeyinkamakinde.homestead.com/index.html
Posted by Adeyinka Makinde at 11:07