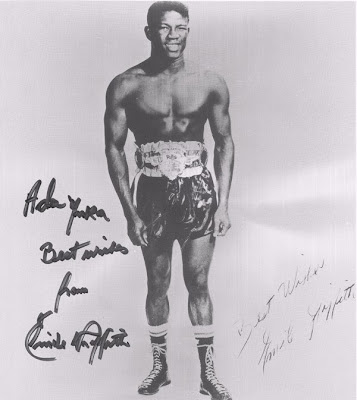 
So farewell it is to one of boxing’s great practitioners Emile Griffith. History already marks him out as one of those fighters alongside the likes of Dick Tiger who carried the banner of the sport in the final halcyon era of boxing’s Mecca, Madison Square Garden.

I interviewed him for my biography on Dick Tiger and I had the privilege of meeting him, shaking his hand and receiving a signed autograph of a photo taken at the peak of his powers.

Quite a bit of drama in his life story: rags to riches immigrant fighter from the Caribbean; the tragedy of the final bout with Benny ‘Kid’ Paret; controversy over his sexuality.

I would advise non-aficionados to watch a documentary made about him some years ago entitled ‘Ring of Fire’. A clue as to what to expect? The final scenes in the film brought tears even to the eyes of the hardest, toughest sorts.
Posted by Adeyinka Makinde at 13:16