Reviews of 'JERSEY BOY: The Life and Mob Slaying of Frankie DePaula' at amazon dot com 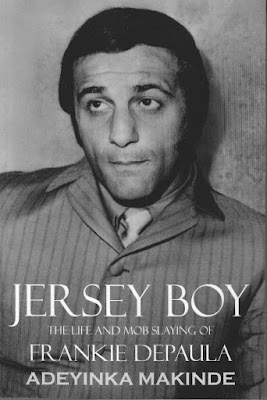 "Frankie DePaula was a club fighter with a world's champion's power in his punch. The book traces his rise and fall and all the wise guys he befriended and angered during his career. Everyone who knew him said there was two sides to the man, but the darker side caused his 'mandatory retirement'. A very god read and I would recommend it to boxing and crime fans."
- John in NYC (March 13, 2015)

"I knew Frank a little bit when he trained in Chatham Township, N.J. I always wonder what happened to his family. Thanks to the book I now know. I thought that the writer did a great job.”
- John McMahon (March 8, 2015)

"This is one of the best books I have read about a fighter. A story of a man with great talent who got hooked up with the wrong people."
- Dennis Vespi (March 5, 2015)

Title - Coulda Been A Contender

Title - A Boxer from Bufano's Gym

"I can't remember enjoying a book more than this one. It's definitely film-worthy. But the author was a bit melodramatic and hyperbolic in describing DePaula's fistic abilities. Nevertheless, his research regarding DePaula's convoluted life, and the tawdry environment which spawned him, transported me back to Jersey City--a dirty and dark place from which I am happy to have escaped."
- Peter Wood (September 20, 2014)

"This is a well-written book mixing my two favourite topics to read about- Boxing and the Mafia. This book paints a vivid and truthful image of the condition of boxing and its connection with the Mafia at the time. DePaula was an average fighter but his story is exceptional."
- Mark Easter (March 27, 2013)

"Good book about local Jersey fighter, Frankie DePaula. Well-written...and should be interesting for any avid boxing fan who might be interested in a deeper perspective from a lost era of boxing."
- T. Murphy (January 8, 2011)

"The author tells it like it was -that DePaula was an above-average club fighter who drew people and had the right connections. Anyone who was around boxing in those days or has any knowledge of what the sport was like in the 1960s and early 1970s should read this book. It's worth every penny."
- J. Russell Peltz (August 18, 2010)

"This is a deeply enjoyable book on a fighter perhaps now forgotten. The breath of the research and the style of writing create a 'sensitive' and touching portrait of tough and mean Frankie DePaula. The writer obviously cared about the subject and writes as if he cared deeply to tell the story of DePaula. Congratulations Mr. Makinde: wonderful book."
- S. Selsavage (August 17, 2010)

"The exquisite and infinite painstaking research on this topic is something to be admired...Tremendous job and a must read for anyone not just boxing fans."
- Ron Lipton (July 11, 2010)
Posted by Adeyinka Makinde at 12:33