COMMENTARY – Putin, Islamophobia and how Russia might have become a Muslim nation 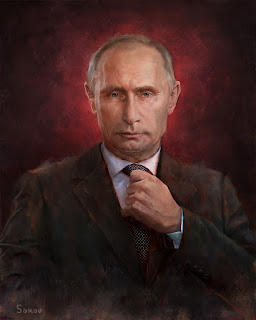 I am not a professed expert on Russian Federation President Vladimir Putin, but I do get a trickle of queries from around the globe about him. A recent one centres on Putin’s attitude to Muslims.


One viral e-mail doing the rounds for some time has Putin addressing the Russian Duma on 4th February 2013 and saying the following about Muslims and other minorities living within the Russian Federation:


On February 4th 2013, Vladimir Putin, the Russian president, addressed the Duma. (Russian Parliament), and gave a speech about the tensions with minorities in Russia:


“In Russia live Russians. Any minority, from anywhere, if it wants to live in Russia, to work and eat in Russia, should speak Russian, and should respect the Russian laws. If they prefer Sharia Law, then we advise them to go to those places where that’s the state law. Russia does not need minorities. Minorities need Russia, and we will not grant them special privileges, or try to change our laws to fit their desires, no matter how hard they yell ‘discrimination’.”


The politicians in the Duma gave Putin a standing ovation for five minutes!


There are several variations with one claiming that he referred to the “suicide” of the United States and Western European nations. However, the purported speech is to the best of my knowledge fiction.


It appears to be an adaptation of a speech that may have been given by an Australian minister of state and has undergone numerous mutations.


I have conducted a search of the Kremlin's site dedicated to the activities of the president. It provides transcripts and other records of his engagement and there is no mention of a speech to the Duma.


Putin is often the subject of rancorous debate among those on the far-Right of the political spectrum as well as those considered to be ‘white nationalists’. This often centres on what the particular debater perceives to be his attitude to the Islamic world and ‘Jewish power’.


Is there a case for Putin to answer for being to the far-Right of the political spectrum, or a white nationalist?


There is evidence of links between his government and the French National Front and European Nationalist and far Right groups in Hungary, Bulgaria and Slovakia -although many speculate that they are actions linked to Russian measures geared towards sowing discontent against the European Union.


Also, while not officially sanctioned by Putin’s government, the first International Russian Conservative Forum, which took place in March of 2015 in St. Petersberg, attracted a host of ultra-nationalist and far Right political groups.


Additionally, there is much speculation about the precise level of influence over Putin's thinking that the Russian ultra-nationalist ideologue, Aleksandr Dugin has. Dugin's views on Russia's future are seen as aggressive in tone and expansionist in design. Pan-Slavism and Russian chauvinism feature in a complex potpourri of thoughts on ideology, religion, society and geo-politics.


Putin was at the helm of what many consider to be a brutal neo-colonial war of conquest against the breakaway Republic of Chechnya; this in contrast to the defensive reactions he undertook in relation to NATO-orchestrated provocations in Georgia and Ukraine.


In his reaction to the February 2014 coup in Kiev, we can see the measured, pragmatic style of Putin whom ultra-nationalists like Dugin berate for failing to annex the whole of eastern Ukraine.


Nonetheless, while clearly a nationalist and a promoter of social conservatism in his country with a special place for the revived Russian Orthodox Church, a distinction can be made for the most part between Putin and Russian ultra-nationalists. His brand of nationalism is officially inclusive and not by default hostile to minorities including Muslims.


Those seeking to bolster the credentials of Islamophobia by insinuating some measure of antipathy on Putin’s part would be surprised to find out that Russia could conceivably have converted to Islam in the early stages of its consolidation as a nation.


The story as recounted holds that in the tenth century, Vladimir, the Grand Prince of Rus which was still a pagan state, was looking for a state religion. He sent out envoys to his neighbours fully aware that conversion to the religion of one of them would strengthen Rus’ economic and security position. After all, practising the same faith as a neighbouring state would likely confer trading opportunities as well as help in securing political and military alliances


The candidates were the Christianised Western Christian lands composed of powerful Germanic rulers, the Eastern Orthodox Greeks, the Jewish Khazarian state and the Islamic Ottoman Empire.


It effectively amounted to an adoption of religion according to the highest bidder.


The ancient chronicles record the following:


When the envoys returned they made their report which said: “We saw men worship in a temple that is called a mosque where they sit and bow and look like men possessed. But there is no happiness among them; only sorrow and a dreadful stench. And we went among the Germans and saw their ceremonies, but we beheld no glory there. But when we entered the edifices of the Greeks, we knew not whether we were in heaven or earth. For on earth, we have not beheld such splendour or beauty.  Truly, God dwells among men, for there we saw beauty we can never forget.


Thus, it was that Russia became a Christian state. Whereas, the Greeks offered Prince Vladimir bountiful gifts and  trading privileges, the ban on alcoholic consumption imposed on the Islamic faith ruled out a conversion.


“Drinking,” Vladimir declared, “is the joy of the Russians. We cannot live without this pleasure.”


The validity of the chronicle which was written at least one hundred years after the events it purports to cover is of course disputable.


But on the original point of the purported speech to the Duma, that would appear to be an urban myth. One of many that have been nourished under the auspices of Internet, and one which is of as dubious authenticity as is the recent viral meme and e-mail purportedly presenting a prophecy by Fidel Castro that a thaw in US-Cuban relations would come about when there was a Black President of the United States and a Latin American Pope.


The lesson of course is that there is no end to the means by which tendentious propaganda can shape views and perceptions of the past, the present and the future.