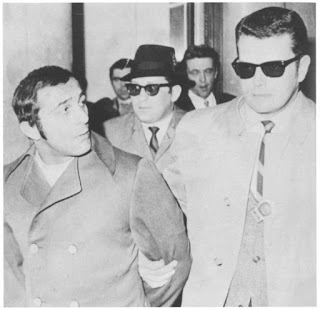 I'm just finding out about the passing of Joe Coffey back in September of last year. Coffey was a long-serving detective with the New York Police Department. He was very helpful to me while I researched my book on the life and murder of Frankie DePaula.

It was Coffey who arrested DePaula in December of 1969 over the match-fixing allegations arising from wire taps which Coffey and his cohorts in the N.Y.P.D. set up in a joint effort with Federal Bureau of Investigation operatives while they monitored mafia figures such as James 'Jimmy Nap' Napoli, a caporegime for the Genovese family.

Coffey was of course very much involved in efforts to bring down the New York Mafia and my book contains several quotes by him which were derived from an extensive interview which he granted me in 2007.

He was definitely fearless in his duties. I believe that he was the first N.Y.P.D. cop to travel to a foreign country on an official investigation since Joseph Petrosino who in 1909 was assassinated by the Sicillian Mafia in Palermo.

Our conversation deviated to other points of interest including his involvement in exposing the less than salubrious financial dealings of Archbishop Paul Marcinkus, head of the Vatican Bank way back in the early 1970s.

That inevitably led to my asking him about his take on the murder of Roberto Calvi and the Banco Ambrosiano scandal. Calvi had been known as 'Bianchiere di Dio'; Italian for 'God's Banker'. His view was that the initial findings on the circumstances of Calvi's death which provided that the banker had committed suicide was a cover up engineered by masonic interests operating within the City of London police.

I followed that case from the time it was big news in the summer of 1982. The first coroner's finding was later changed to murder. Calvi is believed to have been murdered by the Italian pseudo-masonic lodge known as Propaganda Due (P2). His body was found hanging under Blackfriars Bridge. The members of P2 referred to themselves as frati neri or 'black friars'.

Coffey was a pretty outspoken man which led to detractors claiming that he was a publicity hound. Mafia sympathisers often claim that he was anti-Italian, but he was even more scathing of Irish gangsters -The New York Westies- with whom he shared the same ethnicity.

His strident opinions could take on a humourous tack. Reflecting the often tense age-long inter-service rivalry between the N.Y.P.D. and the F.B.I., Coffey was wont to tell others as he made sure to inform me during the interview that F.B.I. actually stood for "Famous But Incompetent".

He is probably best known to Americans for his role as one of the senior investigators in the 'Son of Sam' murders in the 1970s. His memoir,'The Coffey Files: One Cop's War against the Mob', details his wide-ranging exploits as an officer including the role he undertook in protecting the boxer Joe Frazier during the build up to the 'Fight of the Century' with Muhammad Ali in March of 1971.


When I informed him that I was searching for original versions of the grainy microfiche pictures I had viewed of him arresting DePaula in the New York Times archives of the Newspaper Library I had used during my research, he directed me to a photograph taken by the New York Post which was reproduced in his book.

I made sure to use it in my book.

He could see the great potential of my rendition of the Frankie DePaula story being made into a film and he informed me that he was in the development stage of a film related to his exploits in Munich where he traveled to monitor Vincent Rizzo, a low-level soldier for the Genovese family which led to the first uncovering of the aforementioned activities of the Vatican Bank. The proposed movie, The Vatican Connection, has yet to come to fruition.

Joseph Coffey was born on 3rd April 1938 and died on 27th September 2015. His memoir 'The Coffey Files: One Cop's War against the Mob', co-written by Jerry Schmetterer was published by St. Martin's Press in 1992.