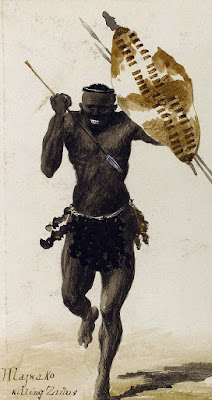 Watercolour of a Zulu Warrior by William Whitelock Lloyd

““What do you know about Zulus?”

An exchange between a Boer and a British soldier in a scene from the 1964 Paramount International release Zulu kick-starts a series of clips from that movie set to a frenzied burst of ‘Power Metal’ music played by the Swedish band Sabaton.

The band’s main lyrical themes are based on war and historical battles -the name is a reference to a sabaton, knight’s foot armour...Lyrical content drawn from World War I, World War II and other historical conflicts is prevalent and lyrics often recite stories of heroic deeds by men and armies from all over the world.

Thus the group have written songs dedicated to the likes of the Seventh Panzer Division of the Wehrmacht, the ‘Ghost Division’ which was commanded by Erwin Rommel, the Swiss Guards, a mercenary unit involved with defending the Holy See during the sacking of Rome in 1527, and the 24th Regiment of Foot, the defenders of the mission at Rorke’s Drift.

While the band have on occasion had to explain that they espouse neither nationalist nor racist sentiment, the videos made by connoisseurs of their music on youtube tend to attract commentators who wish to read those values into them. Thus the crusader theme accompanying the track “The Last Stand” brings out a number of trolls expressing hatred for Islam and the need to be instilled with the crusader spirit in order to stem the perceived invasion of Europe by Muslims.

Similarly, the song “Rorke’s Drift” which is about the heroism of 150 British redcoats defending an outpost against between 3,000 to 4,000 Zulu warriors attracts the odd acerbic comment such as “Fuck Black Lives Matter”. Having said that, the commentary is a mixed bag with a fair proportion displaying good knowledge of history.

It has to be said that the lyrical content of Sabaton songs are not laced with the sort of ambiguity which has bedevilled several songs written by the German ‘Industrial Metal’ band Rammstein which have been used by a multitude of youtube video makers seeking to glamorise the Third Reich and the Waffen-SS.

The bone one picks with the Sabaton rendition of Rorke’s Drift is the analysis of history. Among the opening lines are:

These words remove the backdrop of the Anglo-Zulu wars being one predicated on the aggression of the British seeking to extend the frontiers of the their empire. While the Zulu empire may have been a militarised society along the lines of Ancient Sparta, its ruler, King Cetewayo, was keen to reach an accommodation with the neighbouring British colonial authorities.

But the British wished to break up the Zulu nation in order to achieve wider objectives related to establishing new trade routes and facilitating the conduct of mineral exploration and commercial opportunities.

The song also fails to mention anything about the ineptitude of General Chelmsford in leading the British Army to defeat at iSandlwana. The opening words refer to the main force having been slain and towards the end that the empire is “saved”. The Battle of Rorke’s Drift did not of course ultimately decide the Anglo-Zulu War -the decisive confrontation would occur six months later at Ulundi- instead it was used at the time as a propaganda piece to deflect public scrutiny from the failings which had led to humiliation at iSandlwana.

The song’s chorus is all about the resilience and fortitude of the redcoat in the face of the approaching Zulu hordes:

Zulus attack
Fight back to back
Show them no mercy and
Fire at will
Kill or be Killed
Facing, awaiting

No mention of the heroism of Zulu warriors charging against an onslaught of bullets and as defenders of their realm from foreign aggressors.

Perhaps one expects too much from the lyrics of a Power Metal band.

But if the heroism of members of a British infantry is the focus there, the 1981 song “Impi” by the South African multiracial band Juluka highlights the valiant effort of the Zulu army in inflicting a defeat on the British at the aforementioned Battle of iSandlwana. And if truth be told, the lyrics of Johnny Clegg provides more detail on the doomed army of Chelmsford as they brace themselves for war on the eve of the battle.

There are no forensic references to izimpondo zankomo - the battle formations of the Zulus, the boldness in charging rifle-armed soldiers and the climax of the short spear-wielding warrior killing the red-coated invader. Instead Clegg relies on a refrain sang in the Zulu language to convey the power and mystique of the army of a people who Disraeli described as a “remarkable people who defeat our generals, convert our bishops and who on this day have put an end to a great dynasty”:

Here comes the army
Who can touch the lions?

Perhaps Sabaton might have examined heroism from both perspectives in a way similar to that attempted by the heavy metal band Iron Maiden in their 1982 song “Run To The Hills”. That song contrasted the plight of the nomadic Cree Indians with that of the white settlers, who acting on the religious-derived and state approved ideology of ‘Manifest Destiny’, sought to ethnically cleanse the indigenous populations from the Atlantic Seaboard to the Pacific Ocean.

But song lyrics as with movie scripts are noted for their often ruthless view of history. And in this regard, Sabaton’s “Rorke’s Drift” is no different.

Adeyinka Makinde is a London-based writer. He can be followed on Twitter @AdeyinkaMakinde

Posted by Adeyinka Makinde at 22:38