The Enigmatic Humour of Catalonia 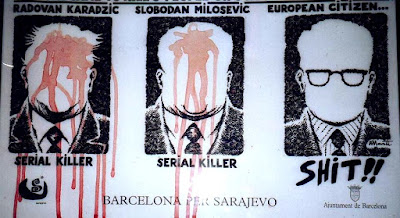 The language barrier and frenetic activity often involved with a week or fortnight’s vacation may impede on the ability to gauge a true picture of the sense of humour of a city or region.


The Catalan sense of humour is said to be similar to that of the English with a tendency towards self-deprecation and irony. It can be nuanced, but is often framed with copious elements of the off-colour.


If the tumultuous and harrowing experiences of a lost civil war, as well as the cultural and ideological repression during the Francoist dictatorship are matters which have shaped Catalonian humour, this may have informed the rationale of the joke “Barcelona Per Sarajevo”, an etching I encountered on a visit to Camp Nou, the home of FC Barcelona, in August 2004.


It is visually stark and direct as well as evidently an attempt at ‘black comedy’ positing, perhaps, a contrast between the homicidal effects of balkanization in Yugoslavia and the soulless uniformity provided by membership of the European Union.


But thirteen years later, I confess that I still cannot fathom precisely what the humour is.