Nigerian Navy formally presented with its colours 50 years ago 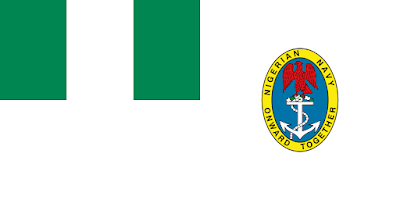 It is fifty years now since the Nigerian Navy was formally presented with its colours by Major-General Yakubu Gowon, the Head of State and the Commander-in-Chief of the Nigerian Armed Forces.

The award of the naval standard was made in acknowledgement of the Navy’s first operations under war conditions during the civil conflict with the secessionist state of Biafra.

Among the Navy’s key operations during the war were its mounting and maintenance of a littoral blockade of the former Eastern Region, as well as its participation in the amphibious landing of federal troops led by Lieutenant-Colonel Benjamin Adekunle in the Bonny sector.

Note: My father, Lieutenant Emmanuel Makinde, the Flag Lieutenant to Rear Admiral Joseph Wey, can be briefly glimpsed at the 2 & 3-second mark behind Wey (left) and Gowon as they stride up the parade field at the Naval base in Apapa, Lagos.

Posted by Adeyinka Makinde at 17:13