The Great Riot of Istanbul: A Gladio Operation 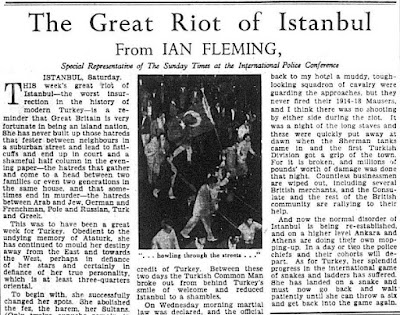 The Istanbul Riot of September 6th to 7th 1955 is not only important because it represented the final phase of the transition of Constantinople from what was historically a Christian city, it also provides an example of how the state is capable of covertly engineering acts of terrorism for the purposes of the psychological manipulation of its citizens in order to meet political objectives.

The pogrom was the result of a conspiracy which was hatched at the highest levels of the Turkish government headed by Adnan Menderes. Specifically, the plans were drawn up in the boardroom of the Seferberlik Taktik Kurulu (Tactical Mobilisation Group/TMG) of the Turkish Army High Command. This was the Turkish version of the Gladio franchise of ultra-secret stay-behind units and special operations bodies that were linked to NATO. Sabri Yirmibesoglu, a retired general, confirmed his involvement in the riots while a serving member of the TMG to the Turkish press in the 2000s.

Three hundred miles away in the Greek city of Thessaloniki, a Turkish agent placed a bomb in a building which housed the Turkish consulate, and which was also close to the to a museum dedicated to the founder of the Turkish state, Kemal Atatürk. The resultant damage was then blamed on Greek provocateurs. The ensuing pogrom in Istanbul targeted the sizeable Greek population and other Christian communities including Georgians and Armenians, consuming both human life and property.

Ian Fleming’s “The Great Riot of Istanbul”, published in the Sunday Times of September 11th, 1955 gave an eye-witness account.

Menderes, who was later overthrown by the Turkish military, was put on trial for a number of crimes including the planning of the pogrom, was found guilty and executed.

However, the objective of driving out a sizeable amount of Istanbul’s Christian population succeeded as many would emigrate over the coming decades.

Posted by Adeyinka Makinde at 04:54