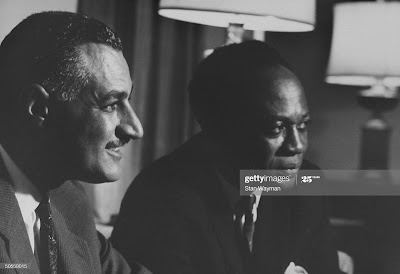 President Gamal Nasser (1918-1970), the Egyptian leader who as a young army colonel led the Free Officers Movement that overthrew King Farouk, was not only a force for Pan-Arabism, he was also a believer in African unity in which sphere he accepted that the leader should be his friend, Dr. Kwame Nkrumah, the Ghanaian leader and exponent-in-chief of the Pan-African ideology.

Along with Nkrumah and Ben Bella, the Algerian leader, Nasser was a member of the "Casablanca Bloc" of African nations who wanted a federated African continent, in contrast to the "Monrovia Bloc" who believed in gradual integration. At the conference in which the Organisation of African Unity (OAU) was established Nasser called for a total boycott against racial discrimination by "all ways and means." In addressing the issue of past exploitation, Nasser said "we are prepared to forgive the past, but we are not ready to forget." He called on the conference to establish an organisation "to guide a free and united African will."

He got on well with Emperor Haile Selassie with whom he worked closely toward the establishment of the OAU. He acted with kindness and benevolence towards the families of Black African leaders who were placed in difficulties. He ensured that the state took care of Nkrumah's Coptic Christian Egyptian wife, Fathia and her children after the overthrow of Nkrumah in 1966, and earlier on, he gave refuge to the children of Patrice Lumumba who were smuggled out of Congo in an operation by Egyptian Special Forces. Lumumba's widow later joined her children and lived in exile in Egypt until she decided to return to Congo.

His friendships with Black African leaders were a positive episode in the relationship between the Black African and Arab worlds; a relationship fraught by the legacy of the centuries-long trans-Saharan slave trade. Nasser was a Centrepoint of Afro-Arab solidarity during the era of anti-colonialism and anti-imperialism.

Less than 48 hours after his overthrow, Nasser wrote the following in a letter to Nkrumah:

"With feelings of great bitterness and shock, we, in the United Arab Republic, have heard of the sad events to which the people of Ghana were exposed … I agree with you that the forces of colonialism are always trying to undermine the independence of African states, and to draw them again into spheres of influence to continue exploiting their resources and shape their fates. What has happened in Ghana is actually part of this imperialist plan. To face colonialism in the African continent requires of us all continuous efforts and a sustained struggle to liberate it from old colonialism and neo-colonialism. The setback that has occurred in Ghana must act as a driving force for all of us to continue the struggle for the consolidation of the independence of African peoples and their liberation from imperialist forces."

Both men had a similar "weltanschauung". They espoused the philosophy of national emancipation and the ideology of socialism; in Nasser's case "Arab Socialism", and in Nkrumah's "Scientific Socialism".

In 1966, Nasser visited the island of Zanzibar which two years earlier had experienced a bloody revolution in which the Black African population had overthrown their Arab overlords, including the sultan who fled into exile. His visit could be interpreted as a gesture of reconciliation on behalf of the Arab world which for a period of time he appeared to be the leader.

He was much admired in his day by many African leaders and their people for his stance against colonialism and imperialism. This was reflected in the tributes paid to him after his death at the age of 52. Among them was the young Sam Nujoma, leader of SWAPO (South West African People's Organisation), who was grateful for the support offered by Nasser to his movement. And when expressing on behalf of the Nigerian nation the sense of "grievous loss" felt by Nasser's death, Major General Yakubu Gowon correctly estimated that Nasser would "be difficult to replace in our lifetime."

Posted by Adeyinka Makinde at 01:45