From Boxers To Rappers: When Ali Endorsed Reagan For President 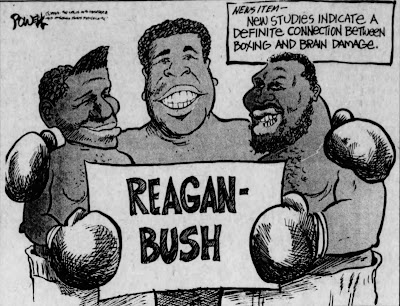 The rapper 50 Cent recently created a furore over his endorsement of Donald Trump during the present U.S. presidential campaign. That the print and online media found it noteworthy to report and discuss his and other endorsements from a number of other rappers was interesting not least because it bears similar undertones to the reaction of Muhammad Ali’s 1984 endorsement of Ronald Reagan, a right-wing Republican presidential candidate who was perceived by many in the Black American community as a “racist”.

The controversy which followed the recent endorsement by the Black American rapper and actor 50 Cent of Donald Trump provoked a severe backlash from many in the Black community, as well as from Democratic Party-supporting White Liberals. It was on many levels reminiscent of the backlash which followed similar endorsements by Black celebrities of right-wing presidential candidates of the past such as that which followed Sammy Davis Jr’s support of Richard Nixon in 1972 as well as Muhammad Ali’s approval of Ronald Reagan in 1984.

Whereas 50 cent based his support of Trump on what he claimed was Joe Biden’s draconian tax plans for the wealthy, Ali, who had earlier endorsed the left-leaning Jesse Jackson during his landmark presidential bid, based his decision not on economics but on religion; saying that Reagan was “keeping God in schools, and that’s enough.”

The reaction towards Ali was littered with expressions of "disappointment", as well as barbs related to his declining health, which his political critics attributed to brain damage caused by a lengthy career in the ring.

Ali's endorsement of Reagan came alongside that of two other Black former heavyweight champions, Joe Frazier and Floyd Patterson. Headlined "We're Voting For the Man", billboards appeared showing Reagan playfully aiming a punch at Ali and superimposed photos of Frazier and Patterson.  Ali had specifically referred to both rivals as being "Uncle Toms" because they had received widespread support from Whites in the contests that he had with Frazier and Patterson respectively in 1971 and 1965. And it seemed rather odd and insulting that the marketing team who placed the billboard in Black neighbourhoods would use the designation of Reagan as “The Man”. “The Man” was of course a Black colloquialism which referred to a figure of state authority who was perceived to be an instrument of “White oppression of Blacks”.

It seemed striking that Ali, who at the peak of his powers was a member of the separatist Nation of Islam organisation and who was perceived by many White Americans as a racist and a radical, would actually take the step of endorsing a figure such as Reagan.

There were compelling reasons as to why this should have been the case.

A former film actor and governor of the state of California, Reagan was perceived as a "racist" because when bidding for the Republican Party's presidential nomination in 1980, he chose to start his campaign in Philadelphia, Mississippi, the place where three civil rights workers were brutally murdered during the height of the movement. This alongside Reagan's frequent references to "states' rights" appeared to many to have been a coded message to White segregationists.

One other noteworthy incident which confirmed for many Reagan’s racial bias occurred two years prior to Ali’s endorsement when Larry Holmes, a Black world heavyweight champion, fought Gerry Cooney, an Irish-American contender. There had not been a White American world heavyweight champion since Rocky Marciano had reigned in the 1950s. The bout is remembered in boxing circles for the heightened atmosphere of bitter racial rivalry which surrounded it, and this was not helped by the fact that it was discovered that Reagan had made arrangements to call and congratulate Cooney in the event of the challenger winning the bout.

No similar arrangement was made with Holmes.

More evidence of Reagan’s racial attitudes was unearthed last year through the discovery of a taped conversation with Richard Nixon in the early 1970s. Complaining about a vote against the United States in the United Nations which had been supported by many African countries, Reagan told Nixon:

Last night, I tell you, to watch that thing on television as I did ... To see those, those monkeys from those African countries—damn them, they’re still uncomfortable wearing shoes!

This was of course unknown at the time of Ali’s endorsement, but the other points of evidence along with Reagan’s history of opposition to the Civil Rights Act of 1964 and the Voting Rights Act of 1965 were enough to direct a great deal of opprobrium towards Ali.

In a syndicated column published in October 1984, and titled "Once a Champ, Now a Loser", Eileen O'Connor concluded that Ali's athletic talents had faded years ago and "It's a shame to see him lose his dignity as well." (1)

(1) It was not the first time that Ali had been criticised in this sort of manner. Some years previously, his decision to accept the role as President Jimmy Carter’s special envoy tasked with encouraging African nations to boycott the Moscow Olympics after the Soviet invasion of Afghanistan was met with incredulity by several of the African nations he visited. Nigeria’s Shehu Shagari refused to meet him, and a Tanzanian diplomat famously offered the following criticism of American policy by asking whether the United States would “send Chris Evert to negotiate with London.”

Adeyinka Makinde is a writer based in London, England. He is the author of the books Jersey Boy: The Life and Mob Slaying of Frankie DePaula and Dick Tiger: The Life and Times of a Boxing Immortal. He contributed two essays to the Cambridge Companion to Boxing, part of the Cambridge Companions to Literature series published by Cambridge University Press in January 2019. They were “The Africans: Boxing and Africa” and “Jose Torres: The Boxer as Writer”.

Posted by Adeyinka Makinde at 16:56