Ali-Frazier I: The Fight of the Century 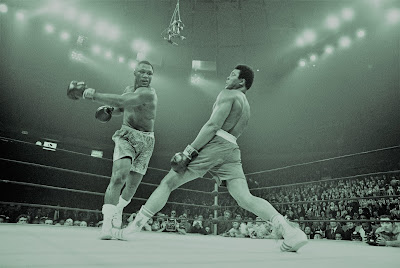 Half a century has now passed since the third and last bout dubbed ‘The Fight of the Century’ during the 20th century.

The first bout between Joe Frazier and Muhammad Ali was a unique clash of undefeated heavyweight champions. One of the most anticipated events in sporting history, it was promoted as reflecting the ongoing battle in America between the forces of conservatism and those of the counterculture, represented respectively by Frazier and Ali.

Only two other fights had carried a similar level of significance: Joe Louis’s return confrontation with the German Max Schmeling on the eve of World War Two, and the duel between Jack Johnson and James Jeffries in 1910. While Louis-Schmeling was touted as a contest between opposing ideological camps on the threshold of war, the encounter between Johnson and Jeffries was perceived and promoted as a clash between black and white, and nothing short of a battle for racial hegemony.

Held at Madison Square Garden, Ali-Frazier I was attended by an extraordinary array of people. New York’s nobility and the city’s underworld sat ringside with celebrities such as Frank Sinatra, who worked on assignment as the official photographer for Life, and Miles Davis. Burt Lancaster worked as a co-commentator.

But beyond the hyperbole and the mischaracterization of what both men represented (Frazier was not a man of the Establishment and Ali, then a member of the Black separatist Nation of Islam, was not an aficionado of the counterculture) was the display of skill and courage over 15 gruelling rounds. Ali, who had been stripped of his world title by a vengeful Establishment over his refusal to be drafted into the United States Army during the Vietnam War, and whose religious affiliations had engendered widespread public animus, fought Frazier having had only two bouts after an absence of three and a half years.

Although he caused Frazier a significant amount of physical damage, which necessitated Frazier’s stay in a hospital after the bout, Ali, himself was also significantly corroded by the contest, during which he was felled in the last round by a patented left-hook. Frazier won the bout in which both fighters shared equally, the then colossal sum of 5 million dollars.

And while the sport of boxing then as now is criticised for its raison d'etre for the purposeful infliction of violence and its tendency to criminally exploit fighters, nothing can take away from its capacity for spectacle, as well as its ability to function as a vehicle for expressions of ideological sentiment and sociological undercurrents.

Ali-Frazier I embodied this.

It is arguable that no two other athletes have commanded the world’s attention as they did in the build up to their fight.

Adeyinka Makinde is the author of Dick Tiger: The Life and Times of a Boxing Immortal and Jersey Boy: The Life and Mob Slaying of Frankie DePaula. He is also a contributor to the Cambridge Companion to Boxing.

Posted by Adeyinka Makinde at 14:36