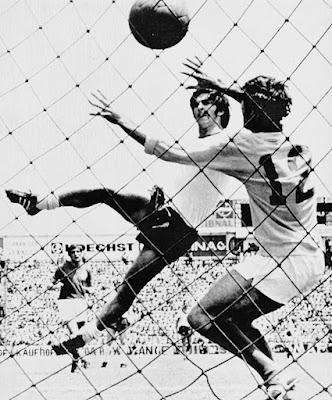 It is fair to opine that Gerd Muller was one of the greatest strikers in world football history.

He was part of the generation of West German footballers who consolidated the resurrection of German football begun by the FIFA World Cup-winning team of 1954. Muller was part of the team that earned the third-place spot in 1970 during which the team participated in two of the greatest games in World Cup history: the 3-2 come-from-behind victory against England in the quarterfinals and the "Game of the Century", the 3-4 loss after extra time to Italy in the semi-finals.

Muller emerged as top goal scorer in the tournament with 10 goals.

Four years later, he scored the winning goal in West Germany's 2-1 victory over the favoured Dutch side in the World Cup Final on home soil.

He was of course a stalwart of the dominant Bayern Munich team of the 1970s and along with the likes of Franz Beckenbauer and Sepp Maier won a slew of trophies including several Bundesliga and the European Cup of Champions tournament (now the Champions League).

He was also part of the West German side which won the European Cup of Nations in 1972.

He was a small, compact man who was tremendously gifted at finding goal scoring opportunities. His record of 68 goals in 62 matches stood for a long period of time before being broken by Miroslav Kloser who needed 132 games to reach 69.

He scored a total of 722 goals in 779 matches, a fitting testament to the prowess of the man who was known by the moniker "Der Bomber".

Posted by Adeyinka Makinde at 17:42