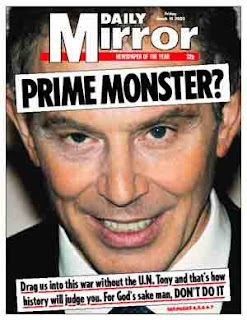 Archbishop Desmond Tutu recently called for the trial of former British Prime Minister Tony Blair and ex-United States President George Bush at the International Criminal Court in The Hague over the circumstances leading to the Iraq War.

Whatever the supposedly amorphous qualities that are frequently attributed to international law, there are existing principles clearly enunciated in relevant jurisprudential authorities and enshrined within the protocols and provisions of binding international agreements.

The Nurnberg Principles refer to the “Planning, preparation, initiation or waging of a war of aggression or a war in violation of international treaties, agreements or assurances" and "participation in a common plan or conspiracy for the accomplishment" of any of the aforementioned acts.

Following the conclusion of World War Two, the likes of Wilhelm Keitel and Alfred Jodl; key members of the German Military High Command as well as the likes of Joachim Von Ribbentrop, who were the remnants of Adolf Hitler’s cabinet, were tried and hanged at Nurnberg for having been complicit in the waging of a war of aggression.

While the background to the German attack on Poland combined longstanding territorial disputes with the Poles and the wider Nazi objective of creating Lebensraum (Living Space) in Eastern Europe, the Hitlerite state, as many nations have been apt to do in the long history of war-making, offered a justification for its breach of the peace.

This came via the Gleiwitz Incident, a crudely devised and executed ‘false flag’ operation which involved German operatives posing as Polish soldiers attacking a German radio station with the result that 24 hours later, Hitler could stand before the Reichstag to announce to the German nation and to the world that “we are returning fire.”

The countdown to the war in Iraq involved a sustained media bombardment of various items of information supplied by the intelligence apparatus of the United States which implicated the regime of Saddam Hussein in a miscellany of apparently belligerent deeds and intentions  which included the acquisition of uranium from the Republic of Niger, collusion with Al Quaeda over the September 11 tragedy  and the most prized item of all: the presence of weapons of mass destruction which could be deployed, according to Blair in an announcement before Parliament, within 45 minutes.

An air of desperation surrounded these claims at the time each was made and they were widely scrutinized, as was the infamous speech made by the reluctant Colin Powell before the United Nations.

Indeed, what many at the time felt to be suspect pieces of information were subsequently found to be crudely manufactured falsehoods, or at the very least, items among a spectrum of genuinely gathered intelligence data which ought not to have seen the light of day after a sober process of in-house analysis.

Part of the case made against the war as having been legal is the fact that a second vote regarding an invasion was not put before the United Nations. The case against Blair is seemingly bolstered by the fact that he formally blocked the then UK attorney general, who is officially the government’s legal advisor, from formally giving his view on the legality of the proposed war to his cabinet.

Blair’s defence to Tutu’s call is to refer to his accusers as peddlers of “old canards”. He dodges the specific issue of his complicity in a gross deception by asserting that a cruel dictator who used chemical weapons against his people, was removed from power; that the Iraqi economy is much improved and that the infant mortality rate has been cut down.

What Blair fails to mention is that the chemical weapons and the export licences allowing their purchase emanated from the West. The ‘miracle’ of a much improved economy is not so impressive when set against the background of the crippling UN-sponsored sanctions imposed on the pre-war Iraq, as indeed is the improvement in infant mortality given the 500, 000 deaths of Iraqi children as a result of the embargo; a resultant factor in regard to which the then US secretary of state, Madeline Albright cruelly announced: “the price is worth it.”

The case against Tony Blair has been made in a number of ways. A satirical drama produced by the UK Channel 4 station, entitled The Trial of Tony Blair, was broadcast in 2007 and depicted Blair being arrested and flown to The Hague while in Malaysia last year, a mock tribunal featuring among its seven prosecutors, an American professor of law, found Blair and Bush guilty of “crimes against peace.”

One of the United Kingdom’s most prominent human rights lawyers, Geoffrey Bindman is on record as categorically stating that the Iraq War was an “illegal aggressive war.”

One often hears from those involved in law enforcement about a kind of psychosis among criminals who did the crime but who keep on insisting on their innocence until they actually believe they are innocent.

There are many who would argue that Tony Blair's self-delusion neatly fits this profile.

Adeyinka Makinde lectures in Public Law at a London University.