Rejoinder to a comment on my recent commentary: Tony Blair - War Crimes Suspect 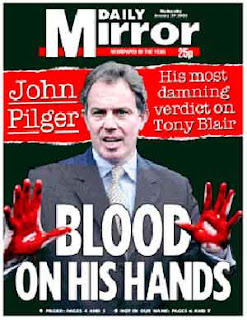 Glad you enjoyed the column Michael.

I take all your points on board although I do disagree with a number of your interpretations.

The article wasn’t comparing the US political system to that operated by the Hitler regime.

It was laying out the cold facts which if linked to the relevant legal principles means that anyone ranging from the leader of a democratically elected nation to those at the helm of a totalitarian state can be judged by the same standard.

My commentary focuses on the initiation aspect. What was the pretext? What was the disingenuous material relied upon as justifying the commencement of hostilities?

These non-existent weapons of mass destruction were specifically highlighted as being capable of deployment and launch within 45 minutes. To believe that, Tony Blair (and George Bush) would have needed to have obtained credible intelligence data to a highly specific degree which many suspected at the time was very suspect and which was subsequently confirmed as untrue.

Michael, you write: “Fakery apparently works over there (in the Arab world)”, but just as surely, fakery works just as well over ‘here’ (in the Western world).

The history of war-making when put under close scrutiny from the perspective of the United States is littered with highly suspect events: The blowing up of ‘The Maine’; the sinking of ‘The Lusitania’; and what of the ‘Gulf of Tonkin Incident’?

So far as the underlying reason for an attack on Iraq is concerned (as well as the removal of ‘hostile’ regimes in Syria and Iran) eyes should be directed at the geo-political strategies devised by the infamous think tank named the Project for the New American Century.

Paul Wolfowitz was obsessed about the idea of a cataclysmic (or a catastrophic and catalyzing) event analogous to that of Pearl Harbour which would form the basis of a justification for greater spending on the American military infrastructure and the application of its war machinery with or without international support to enforce a form of global domination. This would involve overthrowing certain regimes as well as ensuring continued secured access to resources including that of oil from the Persian Gulf.

Saddam Hussein had absolutely nothing to do with 9-11, but there were strenuous efforts made at the time to link Iraq to it. No chance: Saddam presided over a secular and not a theocratic regime which meant that he was not in league with Osama Bin Laden or any network of Al Quaeda.

The “ultra-violent terrorist” to whom you refer is I believe Abu Nidal. Nidal was assassinated by Saddam. (Incidentally, he was from a breakaway faction of the Palestinian Liberation Movement whose group committed acts of murder directed either at Yasser Arafat’s group or against targets which seriously damaged the cause of the PLO).

But Michael, when you write that “someone was going to get attacked” and then add “justifiably”,  one wonders whether the true emphasis in that statement is that regarding the need of attacking “someone” (another state given the decidedly acephalous nature of Al Quaeda); a fixed state and less on the justification.

There were absolutely no grounds for attacking Saddam’s Iraq which had been severely weakened by sanctions and the imposition of, I believe, two geographic no-fly zones, which incidentally did not stand the test of international law.

So where does the buck lie? Your response gives clues as to the likely culpability of key members of the Bush administration although as chief of state, George Bush cannot be let off the hook. And based on the principles established at Nurnberg, those senior members of the American armed forces who prosecuted the war on behalf of their political masters would also be culpable. We all remember the non-defence of “I was merely following orders”. The fact that Parliament and the US Congress approved this illegal action only shows the imperfections in so-called democratic and informed societies who are just as susceptible to the manias that are whipped up by government propaganda as well as by the mass media. Again, it is instructive to look at the historical role of the media in beating the drums of war as they manipulate and fashion public opinion.

I understand the distinction which you wish to make between the nature of the Hitler regime and even Saddam’s brutal reign, but I beg to differ as to its relevance in regard to the facts of relying on false information to start a war.

And by the way, I agree with you about the misuse of the Hitler comparison in certain instances in history. (This, as I have explained, does not apply to my references to Nurenberg; one has to mention Nurnberg because the Nurnberg Principles are the starting point. They are the STANDARD.) Take Gamal Nasser who was painted as ‘The Hitler of the Nile’ by Anthony Eden as well as the Israel propaganda of the day. He was nothing of that sort.

And while we speak of Nasser, here’s a thorny-sensitive matter: The war commenced in 1967 by the state of Israel on the basis of its being a pre-emptive act in self-defence against an impending attack by Egypt and the armies of Jordan and Syria is one of the most persistent myths in the annals of war.

In short hand, Nasser was skilfully lured into a trap set by Israeli hawks who had practically staged a military coup against Levi Eshkol’s government and installed Moshe Dayan as the minister of defence. The war of 1967 was one of a pre-designed territorial expansion; one which was to create a Greater Israel and complete business which had been left unfinished after the 1948 war.

The admissions of Generals Rabin, Bar Lev, and Peled, along with members of the war cabinet including Menachem Begin make this plain.

Nasser’s closing of the strait of Tiran and removal of the UNIF buffers were actually designed to, as he thought, force the hand of the American government to settle issues which he believed were in accordance with the state of affairs left by Eisenhower who forced the British, French and Israelis to call off their illegal occupation of Egyptian territory during the Suez war of 1956.

The existential threat posed by Egypt in ’67 and the threat of the annihilation of ‘little Israel’ is simply not true. Israel has never been in danger of being overwhelmed by any combination of Arab armies. Not in 1948, nor in 1967. Not even in 1973.

But back to Saddam, while you say that he started the first Gulf War, I think it worthwhile to put the invasion of Kuwait into some context.

The background to this is the war between Iraq and Iran which lasted for much of the 1980s. Saddam was encouraged to attack Iran by the United States who wanted to be rid of the Ayatollah and other theocrats who had hijacked the anti-Shah revolution of 1979. He was also encouraged by much of the Arab world who have historically displayed much antipathy towards the Persians who are also of the rival shia denomination; the Arabs being largely Sunni.

Anyway, the war was a costly, bloody drawn out affair and Iraq, given that they were fighting a pan-Arabist, Sunni war on behalf of the Gulf kingdoms (and a proxy war on behalf of the United States), not unreasonably demanded that they pay something towards repairing the Iraqi infrastructure as well as fix things so as to enable higher oil prices from which Iraq as an oil producer would benefit.

When this was not forthcoming he threatened Kuwait which also shared a not very well demarcated border with Iraq (both were under the same administration during European colonial rule). Kuwait was also apparently ‘stealing’ crude oil from fields which apparently had been agreed as Iraqi.

Crucially, there is evidence that a serving but outgoing US ambassador to Iraq gave assurances that the United States would not view an invasion of Kuwait in an unfavourable light.

So not condoning his invasion (did you hear that the stuff about Iraqi soldiers throwing Kuwaiti newly borns out of their incubators was a propaganda lie?) but that’s the background to that first Gulf War.

Again, I must say that I respectfully disagree with the standard that the “US and Britain would have been stupid to give him the benefit of any doubts. And doubly so in the aftermath of 9/11”.

Such an argument would not stand the test of scrutiny of a lawfully constituted tribunal of inquiry. Nations cannot start wars or threaten to start wars on the basis of this or that nation posing existential threats. That is a law which favours the strong over the weak. It is analogous to the proverbial law of the jungle, although it fits in perfectly with the aforementioned Wolfowitz Doctrine of acting unilaterally and with overwhelming might.

But I believe that what you say about “fixing what we broke” and giving them “food and money” serves as an admission on your part that an unjust and indeed an illegal war was instigated by America.

Apologies will not bring back the colossal cost in human life (or indeed the lives of American servicemen whose relatives should not be seen as unpatriotic if they choose to hold to account the chiefs of state who led their nation into this disastrous debacle), and you are correct to assert that they can never be truly paid back fairly.

That war did not serve America’s interests at all. In fact, it led to a majority government of Shias who had been oppressed by the minority Sunni regime of Saddam, thus giving a foothold to neighbouring Iran.

It also led to the unleashing of ‘Al Queda in Iraq’ which proved that Bin Laden and his demented Sunni extremists have killed more of their fellow Muslims than so-called ‘Western infidels’. The chain reaction of violence was/is truly tragic and for this, the initiators of the original war should bear responsibility.

You need to listen to the father of one of the British soldiers who was among the first servicemen killed after the commencement of war when he speaks with such bitterness, but moral and legal force about the culpability of Tony Blair.

As I said in my preamble to this thread, the appellation of war criminal should not be delimited to African, Asian and Balkan figures. There are a number of Western leaders with blood on their hands too!

Did someone just mention the name ‘Henry Kissinger’?