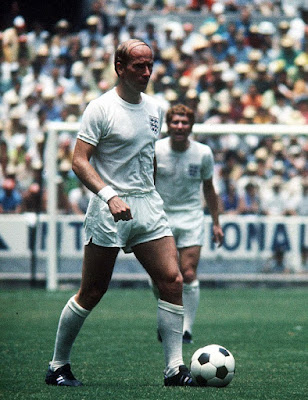 Bobby Charlton during the 1970 World Cup in Mexico

He possesses an aura of greatness in far greater excess than Wayne Rooney.

1. Rose from the ashes of the Munich Plane disaster.
2. Won the European Cup in great style.
3. World Cup winner.
4. Participant in some of the most legendary confrontations in international football history.
5. Great ambassador of the sport.

Both Gary Lineker and Jimmy Greaves have better goal scoring ratios and Rooney has now scored more goals but Charlton's style and achievements still make him tops for me.