Tales of Food and Travel - Gelato 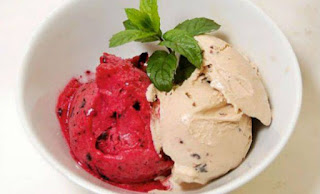 Lest we forget the event-capping dessert we often take after indulging in our preferred cuisine. There is much to recommend about gelato, not least of which is that it contains less fat than conventional ice cream and has a greater proportion of whole milk.


It is, of course, another Italian-created gift to the world, and always reminds me of the aftermath of finishing a basic lasangne meal I had at an ordinary eaterie near Stazione Termini in Rome when I was waiting for a train to take me to the airport.


The waiter asked me what I wanted for dessert and I replied, "Do you have any Haagen-Dazz ice cream?" My longstanding affinity to this ostensibly European ice cream which is actually American originated got the better of me.


The waiter looked at me with a mixture of pity and despondency etched on his features. Maybe he was also a little angry and frustrated about what he might have perceived as ignorance on my part or even as impertinence.


Here I was after all in a place visibly well-stocked with all manner of gelato, semifreddo and granita in assorted flavours and colours ornately laid out with accompanying fruits and syrups; a foreigner in Italy, the fantasy land of ice cream, and I was requesting a recently invented and much hyped North American concoction of ice cream.


Shamed by his reaction and the inexorable logic behind it, I quietly took hand of the dessert menu he had handed me and soon after sheepishly asked for a Strawberry-Vanilla combo.