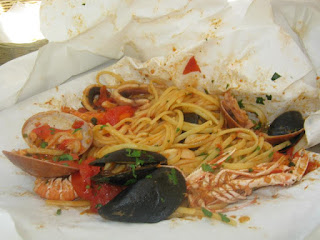 "Linguine al Cartoccio" at Bellini, Ristorante e Pizzeria on Via Costantinopoli in Naples 2012

1. First picture that I took of food in a restaurant after years of stating I would not indulge in that form of "social media vulgarity."

2. Extreme hunger derived from indulging in tourist activities on an extremely sunny day. Therefore was seeking an exotic seafood mix with the proviso that I was going to be filled up. It consists of Linguine Pasta, Giant Tiger Prawns, Mussels, Plum Tomatoes & assorted Peppers.

3. The dish is typically served in paper or tin foil. It was 'well-ordered' but took on a 'messy' appearance soon after unwrapping it.

4. Located in Decumani, the historic centre of Naples and fittingly close to the Museo Archeologico Nazionale.

5. The restaurant is named after Vincenzo Bellini, the famous Italian opera composer, whose statue stands not too far away.