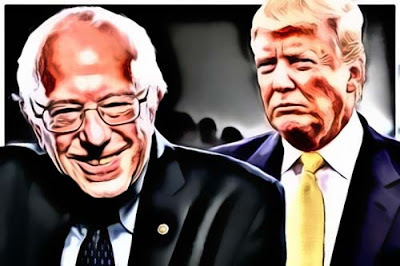 
I have recently argued in an essay of mine -with a focus on Trump rather than Sanders- that a victory by an outsider in the forthcoming United States Presidential Elections will change nothing.


The political system and its processes are run on the basis of favouring the ruling elite comprised of Wall Street and the large corporations.


This has maintained the unfair and frequently fraudulent culture in running the economy. It has also meant with the assistance of influential policymakers of the neoconservative stripe who are entrenched in layers of government that America has remained on the consistent but ultimately debilitating path of militarism.


In the meantime, broad segments of the American population will need to make assessments as to where their future political affinities will lie. This encompasses issues of race, gender and the default ideological bent of individuals.


To which party for instance will white working class males gravitate? Should black Americans continue to overwhelmingly support the Democrats? Will conservative-minded females for the most part only be minded to vote for a Republican nominee who is not named Donald Trump?


Some Americans, feeling that the respective establishments of Democrat and Republican parties will do all in their power to frustrate the candidatures of both Trump and Sanders, are already speaking in terms of protest votes against the preferred candidatures of Ted Cruz and Hillary Clinton. They speak of the primaries as affording a referendum of sorts on the future of the Republican Party. This would also seem to apply to the Democrats.


For it is that the schisms and fault lines apparent in both parties has the potential to create a political upheaval which may result in major voting realignments within the parties if not in their actual splintering.


How, it may be asked, can the Republican Party continue to accommodate a constituency of Tea Party-belonging working class whites alongside country club and boardroom oligarchs? The fracture in the Democrats is also apparent with a choice between the old-style socialism of Bernie Sanders and Hillary Clinton who is clearly the candidate of Wall Street.


Both major parties pose as what they are not.


The Republican party cannot continue posing as the party of 'limited government', of 'fiscal responsibility' and 'Isolationist' foreign policy. The levels of public debt run up in the Reagan administration and which was brought to an extraordinary level during the tenure of George W. Bush are not consistent with 'fiscal responsibility'. And the interventionist streak begun by George W. Bush took the party away from its traditional isolationist position in an extreme manner.


The Democrat Party which through its recent leaders has made itself beholden to the interests of Wall Street and Corporate America, can no longer hold itself as the party for the working man.


It is clear that part of the solution to America's political morass concerns the need for a creation or at least a tangible 're-birth' of political parties which are clear and transparent in their respective ideological platforms and which serve the interests of the constituencies who have consistently voted for them.


What is also clear is the need for an overturning of the successive Supreme Court decisions which have turned over the control of the electoral process to an oligarchy which ensures that government has been manifestly for the one per cent and not the country as a whole.


The mechanism for instituting regulations on election spending would be that of a constitutional amendment.


America needs to take stock of the underlying reasons for its disastrous foreign policy stances since the ending of the Cold War. Here a reassessment of the prevailing Wolfowitz Doctrine which maintains that America must retain a global hegemony at any and all costs is called for.


The provocations of American proxies in Georgia and Ukraine as well as the expansion of NATO in defiance of an agreement between the leaders of the United States and the Soviet Union have threatened to create a conflict with the nuclear armed Russian Federation.


The rise of Trump and Sanders has had the advantage of bringing to the fore a range of issues of critical importance for public scrutiny. The task is for the electorate to challenge itself to become better informed about the thinking of those in the political classes who rule them.


The general and widespread dissatisfaction with the system is shown through elements of congruence between Trump and Sanders, both of whom tap into an 'America First' feeling in regard to both foreign policy and free trade.


While certain criticisms of either man are understandable, in Trump's case of fostering racial divisions and in Sanders case, the concern that he may be an old school class warrior dressed in different clothing, others such as that offered by the influential political thinker Robert Kagan, highlight the subterfuge that is the calling card of those who are members of the neoconservative movement.


Kagan, who is apparently a Republican, went on record in February to say that he would prefer Hillary Clinton as president rather than Donald Trump. This rationale can only be related to Kagan's support for foreign interventions and unconditional support for the state of Israel.


While Clinton favours an aggressive foreign policy, Trump's expressions of favouring a rapprochement with Russia and of questioning American spending on NATO and aid to Israel has brought condemnation from neoconservatives.


The fact that Kagan's spouse, Victoria Nuland, was the principal deputy foreign policy adviser to former Republican Vice President Dick Cheney and is now the head of the Eurasian section of the State Department under the incumbent Democrat President Barack Obama must give informed members of the American electorate some food for thought.


Nuland was of course the overseer of the 2014 coup which brought to power an ultra-nationalist government in Ukraine and fomented a state of strife between Kiev and the eastern region which persists to the present day.


The malevolent influence of those with a neoconservative agenda dates back to the era of Ronald Reagan during which period its adherents were involved in the Iran-Contra Scandal. Several were charged and indicted with federal offences only to be pardoned by the administration of George Bush the senior.


Their influence which rose during the tenure of Bill Clinton was at its highest during the administration of Bush the junior. As events in Libya, Syria and the Ukraine have shown, they are still a formidable presence on foreign policy in the Obama-era.


If the American public in its rumination on the causes of its flawed political process as well as its apparently bottomless national debt and seemingly endless foreign wars, can comprehend and grapple with the origins of the national malaise, then the controversial candidatures of both Donald Trump and Bernie Sanders will have served a supremely useful purpose.