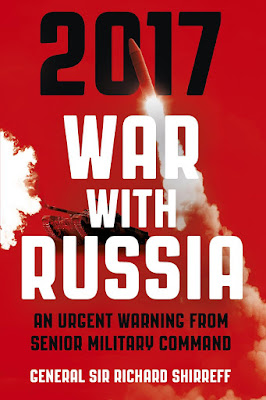 Last week, while browsing around Foyles bookstore, I came across '2017: The War with Russia' which is written by retired British general, Sir Alexander Richard Shirreff.
The prediction is right but the narrative and analysis is deeply flawed.


The argument that the Baltic States are under threat of  invasion by a Vladimir Putin seeking the 'Greater Russia' yearned for by Russian nationalist thinkers such as Aleksandr Dugin is patently false.


1. If Putin had started on such a project, he would have annexed Georgia back in 2008 when its then president Mikheil Saakashvili, at the prompting of NATO staged an attack on South Ossetia during which some Russian citizens were killed. Putin launched a police action during which Russian troops were able to secure the South Ossetian and Abkhazia as independent republics.


Georgia, the birthland of Soviet leader Joseph Stalin, was a part of the Russian empire and the Soviet Union for a period of time exceeding the existence of the United States of America, but there was no prolonged occupation or annexation. Yet Shirreff insists that Russia's actions were an "invasion and seizure of Georgia" and this this was "our Rhineland moment."


2. The general repeats the erroneous narrative that Russia invaded Ukraine and 'annexed' Crimea in 2014. The fact is that United States intelligence agencies sponsored a coup d'etat effected by neo-Nazis and ultra-nationalists whose initial pronouncements and promulgations were clearly hostile to the Russian-speaking population in the eastern region.


The reaction of eastern Ukraine was to create armed militias to resist being subjugated by Ukrainian forces. That these militias include Russian nationalist volunteers as well as Russian special forces cannot be denied.


Yet the fact remains that if Russia had wanted to invade and occupy the whole of the Ukraine, it could have accomplished this within a matter of hours. In fact, Russian ultra nationalists such as the aforementioned Dugin accused Putin of weakness for not mounting a full scale invasion and occupation.


Others felt that a Russian military action which acquired Ukrainian territory as far as the River Dnieper would have 'solved the problem' as it forms a rough boundary between Russian-speaking eastern Ukraine and the rest of the country.


So far as Crimea is concerned, there was no invasion given the fact that Russian troops were already stationed there by right of treaty. Putin reacted as any prudent leader would do given the threat posed to Russia's Black Sea Fleet by convening a meeting of his National Security Council.


While it is a grave matter to embark on the redrawing of national borders, it is clear that Russia could not risk having its only year long warm water seaport and its only gateway to the Mediterranean Sea taken over and handed on a plate to NATO.


To speak of annexation is misguided. A plebiscite was held in which the overwhelming majority of inhabitants voted to re-merge with Russia. Crimea had after all being a part of Russia from the time of the Catherine the Great and was transferred to Ukraine by Soviet leader Nikita Khruschev in 1954. However, Shirreff contents himself by declaring this to be Putin's "Sudetenland moment".


An understanding of the present dangerously heightened tensions between NATO and the Russian Federation can only be understood in the wider context of United States policy of encroaching on Russia's borders.


Guided by the Brzezinski Doctrine, which calls for a post-Cold War effort to militarily intimidate and ultimately dismantle the Russian Federation, NATO has expanded its borders in contravention of agreements reached between the leaders of the United States and Russia.


It has also seen fit to steadily increase its deployment of so-called nuclear shields in countries which surround Russia on the disingenuous protestation that they are defensive measures aimed at combating a potential nuclear threat from Iran.


Thus Russia's conduct in the brewing crisis can be characterized as one which has been largely reactive.


What is particularly concerning about the deterioration in relations and the ratcheting of tension between NATO and Russia is the fact that the field doctrine of the military of both Russia and the United States has changed from the Cold War ethos of the use of nuclear weapons as retaliative measure to one which sanctions the doctrine of first strike.


The recent deployment of NATO troops to Poland and Estonia as a gesture toward indicating a resolve to respond to any Russian "aggression" is the latest stanza in this dangerous path to war.


After the United States-led destruction of seven countries over a period of fifteen years, the Western public is again being hoodwinked into believing in a manufactured threat; that peace and security is being jeopardized by despots when in fact it is the United States fueled by an arrogant foreign policy doctrine of hegemony which has consistently shown itself to be the threat to world peace.


The doctrine enunciated by Paul Wolfowitz after the Cold War remains the philosophical template for an era of militarism dedicated to preventing the rise of any military or economic bloc capable of challenging the might of the American empire.


It is unfortunate that senior military commanders have appeared willing to go along with Washington's agenda of militarism. General Shirreff's designations of Putin, whatever his shortcomings, as a "strongman" in the mould of Adolf Hitler cannot stand the test of objective scrutiny. There is little tangible evidence to suggest that Russia is actively pursuing a policy of territorial expansion.


The source of its ire relates not to the pursuit by its neighbours of friendly relations with the West, but by NATO's deployment of military forces and weaponry on its borders - the sort of provocation that led to the Cuban missile crisis in 1962.


He fails to consider the age long tribal animosities on the part of the Baltic states in baiting the Russian bear and the interests of the military industrial complex represented by the likes of the Lockheed Martin Corporation and the Raytheon Company in fomenting crisis and conflict toward the end of boosting stock and maximizing profit margins.


His pretensions as a soothsayer represent yet another abject failure on the part of establishment figures in the law, the intelligence services and the military in providing the requisite level of sober and truthful analysis and advice to their political masters, and, by extension, to the public.


It is a shortcoming which also extends to the mainstream Western media which has played its part in spoon-feeding the public with the narratives provided by NATO and the governments of its member states.


There is a lack of scrutiny of the facts and a consistent failure to bring issues to the fore of public debate. These include the aforementioned issues related to the change in the doctrine governing the introduction of nuclear warheads in the battlefield, the rationale for the deployment of nuclear shields around Russia as well as the justification of the continued expansion of NATO.


They are failings which may ultimately lead to an unbearable cost: the extinction of life on earth itself.

Posted by Adeyinka Makinde at 16:17