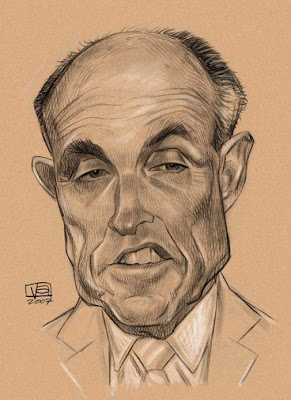 Rudy Giuliani can play to the gallery over 'Black Lives Matter' claiming that the movement is "inherently racist" and "anti-American".


But this man presided over the notorious police execution of Amadou Diallo and other egregious acts of brutality while mayor of New York.


His heartlessness and incompetence is well-documented by the union representing firefighters in New York and families of firefighters killed on 9/11. The 'scoop and dump' policy instituted regarding the recovery of their remains was an absolute disgrace. The faulty equipment provided to firefighters had a background involving the circumvention of the proper bidding process for city contracts and the testing of the equipment.


He displayed poor leadership on 9/11 - playing up to the media instead of settling down to a command position to oversee operations. He's also a bought and paid for cheerleader for a foreign lobby.


He supported the illegal invasion of Iraq -an enterprise that brought no tangible geo-strategic reward to America- and one in which American troops inevitably lost their lives.


So much for Giuliani's patriotism.