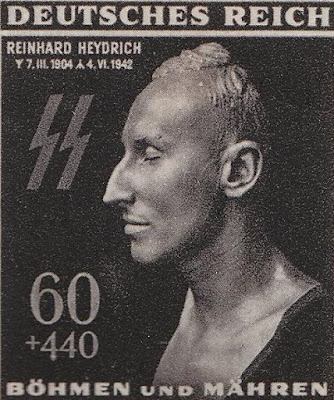 Reinhard Heydrich's funeral was one of the most elaborate send-offs staged during the short tenure of the German Third Reich. It was attended by a collection of high-powered dignitaries and functionaries of state including Adolf Hitler himself. Heinrich Himmler, the SS Reichsfuhrer, gave a eulogy and Reichsmarschal Herman Goering, at the time Hitler's presumptive successor, was present.

Held at the Mosaic Hall of the new Reich Chancellery on June 9th 1942, it had been preceded by ceremonies in Prague started three days earlier when a torchlight procession of SS officers and other personnel of the German military accompanied his coffin to Prague Castle.

The following morning, the coffin was exhibited in the courtyard of Matthais Gate where crowds of German and Czech citizens streamed past until the late afternoon. After this, Heydrich's coffin, which was mounted on a gun carriage, made a final journey through the streets of Prague along which tens of thousands stood to salute. The cortege crossed the Charles Bridge and made its way to the Central Railway Station from where it was transported to Berlin.

The prelude to the funeral was marked by a performance of Wagner's Gotterdamerung by the State Orchestra. Himmler praised Heydrich as a "character of rare purity." And when he rose to speak at the podium, Hitler was no less appreciative in his remarks:

He was one of the best National Socialists, one of the strongest defenders of the concept of the German Reich, one of the greatest opponents of all enemies of the Reich

He concluded by awarding Heydrich the highest award that he could bestow: the highest stage of the German Order. The solemnity of the occasion continued after Hitler's short words by the martial drumming that heralded the lament to fallen German soldiers Ich Hatt Einen Kameraden. His coffin was then borne from the hall to the strains of Beethoven's Eroica and taken to Berlin's Invalidenfriedhof for burial.

The events attending his passing including flaming torches, primeval drumming and Himmler's eulogy bore the heavy imprint of paganism. It was the way Heydrich, like Hitler a lapsed Catholic, would have wanted it.

Not all, however, were impressed by its grandeur. The British press referred to it as "a gangster funeral in the pompous Chicago style".

It is as a criminal that Reinhard Heydrich is largely portrayed.

First in his lifetime as the Acting Reichsprotektor appointed by Hitler to rule over German occupied Bohemia and Moravia, he became known as 'The Blond Beast',  'The Butcher of Prague' and 'Hitler's Hangman'. Over the course of time, he has been earmarked as nothing less than than a psychopath and a 'god of death.'

Far from the fallen viking princeling portrayed by the Nazi propaganda machinery in the aftermath of his death, allied propaganda depicted Heydrich as a cold-blooded killer. His deeds including his organising of the Einsatzgruppen, his orders to torture and execute recalcitrant Czech workers and partisans as well as his presiding over the infamous Wansee Conference marked him as a homicidal maniac.

The views expressed by pillars of the Nazi establishment did not betray any sentiment for the man. "Is the swine dead at last?", asked SS-General Sepp Dietrich after news confirmed his passing. Hitler praised him as "the man with the iron heart."

Yet this paragon of the brutal virtues of what was held out to be the perfect SS man was born into a comfortable upper middle class environment in the city of Halle an der Saale in 1904. Reinhard Tristan Eugen Heydrich was a child of music. A talented violinist whose father Bruno, a composer and opera singer ran a conservatory, Heydrich's love of music continued for the rest of his life. How then did a man from such a background metamorphose into a such a figure of villainy and infamy?

Here the interpretations given by biographers of Heydrich's ascent to the higher echelons of the Nazi hierarchy are reflective of the evolving currents of analysis given by historians trying to make sense of the triumph of fascist brutality in the civilisation which had produced Goethe and Beethoven.

This has come in arguably three phases. The first school of thought often described the typically successful SS functionary in almost Lombrosian terms; that is, as essentially born criminals or, at least, latent criminals whose natural instincts were unleashed with the coming of the SS state. And so it was that Heydrich's physical features were often deconstructed in terms which his criminal tendencies could be discerned from the sinister construct of his face which looked to some as though an aggregation of two different ones. His eyes, narrow and piercing, bore the stamp of consummate evil and malevolence while his hands, long and slender, resembled those of a strangler. Charles Wighton's 1962 biography, Heydrich: Hitler's Most Evil Henchman conveyed a narrative slanted in favour of a creature that was diabolical in nature.

The second strand in this evolution of thought reflected the thinking of Hannah Arendt's thesis of the 'banality of evil', that of the technocrat whose use and manipulation of the modern apparatus of administration led to the implementation of objectively evil policies due to the human predisposition to willingly obey orders and the need to conform to mass opinion in an uncritical manner. A biography written by German journalist Gunther Deschner which was published in 1977 considered Heydrich to be a technocrat par excellence who was powered by "an indomitable and amoral ambition" which succeeded in submerging all human feeling. Deschner's book Heydrich: The Pursuit of Total Power, conveyed the belief that careerism and the pursuit of excellence was at the heart of Heydrich's deeds.

The latest major biography by German-born scholar Robert Gerwarth an extensively researched work entitled Hitler's Hangman: The Life of Heydrich bases the germination of Heydrich's activities on events in his life which created the basis of his radicalisation and eventual indoctrination as a fervent National Socialist. The path to this was started when he married Lina Von Osten, a young woman whose sympathies for the burgeoning National Socialist movement steered Heydrich to applying for a job with the early SS organisation after his dismissal from the German navy.

Gerwarth as did Deschner before him provides documented evidence disproving one facet early biographers, and unfortunately a few contemporary writers, have latched upon as having a great bearing on his diabolical role in the history of the Third Reich. This relates to the alleged Jewish origins of Heydrich. The thesis was propounded as evidence that Heydrich's ruthlessness particularly in regard to the Jewish question was based on a form of self-loathing and that fear of exposure of his 'Jewish blood' and blackmail by Himmler and others in the Nazi hierarchy had guaranteed his loyalty to the party and had spurred him on be an architect of the destruction of European Jewry.

It is clear that at the time of his death from the effects of blood poisoning following the attack by British trained Czechoslovak paratroopers on May 27th 1942, that Heydrich had adroitly accumulated power and was likely to be eventually considered as a candidate for succession to Adolf Hitler.

He was the head of the intelligence service of the SS, known as the Sicherheitsdienst (SD). Heydrich had ambitions of supplanting the Abwehr, the premier German military intelligence organisation that was run by Admiral Wilhelm Canaris, an opponent of the Hitler regime.

His effectiveness as an administrator was demonstrated by his 'carrot and stick' approach to tackling Czech resistance to German rule. War production in Bohemia and Moravia improved and the population was largely pacified. It was this success which played a major part in the Czech government in exile in London, under severe pressure to act by the British, to send in a squad of paratroopers to effect his assassination.

The life and fate of Heydrich continues to fascinate. A mixture of myth and legend surrounds him. For instance, while the researched and documented history of the motivations behind the attack on him point to the aforementioned pressure on the exiled leader Edvard Benes to act, there are those who believe that a hidden motive was to protect the position of Admiral Canaris and the Abwehr. Canaris, as historians later discovered, acted in ways to undermine the Hitler government and the German war effort. At his trial in Nuremberg, General Alfred Jodl, the chief of the Oberkommando der Wehrmacht, claimed that the Abwehr under Canaris had been a "nest of traitors (and) had served the enemy for years." The belief by some is that Canaris was a British intelligence asset who may even have met with Sir Stewart Menzies, the war time head of the Secret Intelligence Service, on several occasions in Spain.

Another legend surrounding Heydrich's demise relates to the Bohemian Crown Jewels among which is the crown of Saint Wenceslas. Native lore states that any usurper who places the crown on his head is doomed to die violently within one year. Heydrich is rumoured to have placed the the crown on his head during a visit to St.Vitus Cathedral in Prague castle. A corollary of the Wenceslas Curse is that the first born of such a transgressor will also die.

Heydrich's first born son, Klaus died in a bicycling misadventure in October of 1943.

But even without recourse to myth and legend or to conspiracy theories and conjecture, the life of Heydrich remains a compelling study of how circumstances served to mould him from an essentially apolitical person into an unsparingly ruthless character who felt duty bound to aid a system which glorified a racial state seeking to extend its borders and its influence even at the cost of genocide.

Posted by Adeyinka Makinde at 23:07