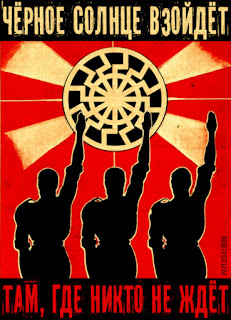 Black Sun Swastika on a Russian Neo-Nazi Poster. A variation of a pro-Franco poster produced by the Phalange Party during the Spanish Civil War

Seventy five years after the invasion of the Soviet Union by Nazi Germany, many will recall the valour of those who eventually resisted the the brutal occupation of Hitler's Wehrmacht. Yet, as the recent violence caused by a hard core of hooligan Russian football supporters at the ongoing European Championships shows, there exists in contemporary Russia elements who have embraced the ideology and culture of Nazism.
It is extremely  disappointing and somewhat perplexing, given the courage and resilience shown by the Russian people in the face of the onslaught by Nazi Germany, to see naked racism and the embrace of neo-Nazi culture among some of Russia's younger population.


The Far Right nationalist football hooligans known as 'Ultras' who wreaked havoc at the European Championships in France are but a symptom of the ugly reputation Russian football has garnered for the racist behaviour of the fans of many football clubs who subject Black players to vicious abuse including monkey chants. The signing in 2012 by Zenit Saint Petersburg of the Brazilian Hulk -the first Black player ever bought by the club- led to denunciations and protests by fans who described the absence of Black players as an "important tradition" and an "issue of identity." Last year, a Miss Russia Premier League Beauty queen representing CSKA Moscow was exposed as reveling Nazi paraphernalia on her social media account.


There are dozens of ultra-nationalist and neo-Nazi movements and organisations in Russia today including Pamyat and the Russian National Socialist Party. They are the descendants of the imperial era Black Hundreds which was xenophobic and prone to anti-Jewish agitation. The contemporary organisations fixate much of their venom on those they refer to as 'Khachi', a derogatory term for those who originate from the Caucasus.


The adoption of neo-Nazi symbols, strategies and ideology is ironic given the Nazi designation of all Slavic people as untermensch, that is, sub-human. Such irony is compounded by the non-European influences on the Russian DNA. Can anyone fail to notice more than a hint of the 'East' in the physical features of many Russians including Vladimir Putin?


Long before Pyotr Tchaikovski's 'Marche Slav', the famous orchestral tone poem that was created during a period of pan-Salvic fervour, the Russian Empire had already become a multi-ethnic and a multi-faith entity. It would be remiss to fail to remind that Aleksandr Pushkin, the father of Russian Literature, was of African descent.


Russia's rejection of the United States-impose regime in Kiev is officially based on a principled disavowal of the presence of a Stepan Bandera-worshipping cadre of neo-Nazis among those who seized power and who govern the Ukraine today. Yet, some in Russia choose to subscribe to a hyper-nationalist and racist creed.


The aspiration to create a new Russia in the aftermath first of an oppressive Communist dictatorship and then of a disastrous experiment with a crude laissez-faire economic system has as with other post-communist Central European countries created the conditions that have bred racism. Under communism, the doctrine that racism was incompatible with the values espoused by international socialism was a mantra spoken down to the masses but never the subject of public debate and examination. It took the unrealistic position that racism did not exist in countries with socialist regimes.


The fall of communism, it is argued, created a vacuum in which populations found the old traditions of nationalism and ethnic solidarity more more valid than the newer, weaker institutions of liberalism and the democratic ideas they espoused.


It is with this background and the Islamophobia bred by the wars in Chechnya that Russia has had to contend with. It is worth noting however that the brand of nationalism espoused by Vladimir Putin, although tied in with the state-aided resurgence of the Russian Orthodox Church, is one which is inclusive. This begins in religious education studies at elementary school level and continues to middle and high levels. Both Putin and his prime minister Medvedev visit mosques and engage in Muslim festivals.


So far as football is concerned, the Russian Football authorities and the government have moved from inaction to a position where fines and bans are imposed for racist behaviour. It is along way yet, but at least there appears to be an awareness for the need to make substantive headway in this area in the build up to the Football World Cup which is to be hosted by Russia in 2018.


There will hopefully be an increasing realisation that pride in Russia need not conjure the beast of 'Russian Chauvinism,' and needless to say, it should not tolerate neo-Nazi culture in the field of politics and civil society.