Book Review of JERSEY BOY: The Life and Mob Slaying of Frankie DePaula 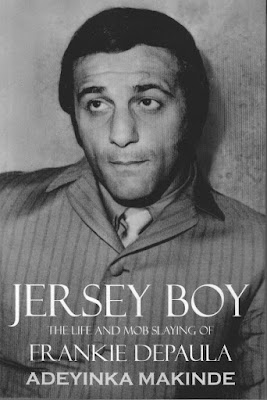 In boxing's long and glorious history certain fighters, who in their day lit up the faces of fans and were on the lips of every boxing-minded person, inevitably become forgotten, just a fleeting name in the rich tapestry of of boxing's past.


Frankie DePaula is one of these 'names'. In his day, he was the darling of Jersey City and thought by many to have enough talent to be a top fighter, but, he never reached the heights of the deep 1960s light heavyweight division.


Adeyinka Makinde has shed light on this forgotten contender and rejuvenated interest in him with Jersey Boy: The Life and Mob Slaying of Frankie DePaula. Bringing the vibrant DePaula to life with testimony's from friends, boxing experts and people from the era. The friends bring to life the reckless and fun-loving nature of Frankie by the people who knew him best. The boxing experts bring his thunderous power-punching style to the imagination of the reader with the testimonies of old fight hands Tommy Gallagher and Ron Lipton being particularly insightful. The bustling Jersey City is created with testimonies of citizens and the tireless research of the local papers.


The book covers every aspect of DePaula's life. From his tough up-bringing on the streets of Jersey City, to his beginning in boxing, his partying lifestyle, his involvement with the mob, his boxing career and ultimately his untimely demise.


As a boxing book this is very good. DePaula's early fights are researched in detail and his training habits (or lack of) are well documented in the book. His sparring sessions with the famed 'Hurricane Carter are covered in particular detail with many eye-witnesses offering their perspective on the sessions.


The jewel of the book is the chapter on DePaula's fight with Dick Tiger, titled simply 'The Tiger'. The effort that Makinde has gone to recreate the 1968 Fight of the Year is very admirable as he brings to life every aspect of the great fight.


However, this book is not solely about boxing. It brings to life the social context of Jersey City in the 1960s exposing the corruption and mob influence to an extent which most crime books do not even cover! Makinde, a native of London, has excellently captured the essence of Jersey City with painstaking research. The fact that an 'outsider' is able to portray Jersey City makes it the more impressive.


Bringing Frankie DePaula and Jersey City in the 1960s to life in a way that has never been seen before, Makinde has delivered a superb read akin to DePaula's left hook - Blistering!