Google Censorship and My Writing 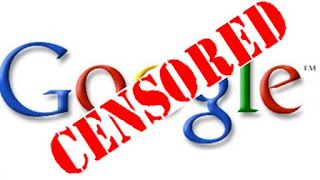 I noticed over the past week that my commentaries and essays which have been published at Global Research dot Canada are no longer coming up when ‘Google News’ is searched.

Google is apparently implementing an initiative to block news coverage by the independent media as part of an attempt to preserve the monopoly of newspapers such as the New York Times, or the “failing New York Times” as Donald Trump in one of his more agreeable recurring rants is wont to refer to it and other establishment outlets.

The argument that “false and misleading information” is circulating on the Internet serves as a convenient cover for the avowed aim of effecting political censorship. The irony is that the mainstream media which has become increasingly corporatized is actually the disseminator of many things false and misleading.

‘Operation Mass Appeal’, was an MI6 scheme through which stories were planted in the news media with the aim of making the British public more amenable to the idea that Saddam Hussein’s Iraq was in possession of weapons of mass destruction. Richard Dearlove, then the head of MI6, had advised British Prime Minister Tony Blair that President George Bush had resolved to attack Iraq even though the case for the existence of weapons of mass destruction was “thin”. But Dearlove also told Blair that “intelligence and facts were being fixed (by the United States) around the policy”.

The build-up towards the Iraq war is not the only example.

The press was responsible for disseminating false claims about an impending massacre in the Libyan city of Benghazi at the time of the Islamist-inspired uprising which came to be supported by NATO. A Telegraph report dated March 19th 2011 and headlined “Benghazi Fights For its Life” was one of many that reinforced this. The reporter ended his dispatch by seemingly taking the (Islamist) rebel communique of the situation as the gospel truth before contrasting it with what he termed “Tripoli’s take of events” which warned the world of a take over by “the gangs of al-Qaeda”.

Coverage of the Syrian conflict has also been littered with mainstream press bias. The White Helmets who are presented as an impartial search and rescue organisation is actually one which is strongly linked to various Islamist militia groups fighting to overthrow the secular government of Bashar al-Assad. It is supremely ironic that when a documentary film celebrating the group as heroic volunteers was awarded an Oscar, its leader, Raed Salah, was prevented from entering the United States owing to his connections to Islamist terrorists.

The contrast between the mainstream media’s coverage of the siege of al-Nusra-held Aleppo and the battle for ISIS-held Mosul was stark. While the media was prone to trumpeting any evidence it could muster about Russian bombing leading to civilian casualties, it did not display the same level of horror at the fate of thousands of civilians killed by US-led coalition airstrikes conducted in Mosul, Iraq. When Aleppo fell in December 2016, the cover story headline of the Economist was revealing: “The Fall of Aleppo: Putin’s Victory, the West’s Failure”.

Consider also the difference in coverage between the conflicts in Syria and Yemen. While the Western media generally seeks to highlight what it perceives as the inhumane tactics of the Assad government in combating jihadist militias who were armed and finance by the United States and its regional allies, the depth of coverage and the urgency behind it is lacking in regard to Yemen where the Saudi Arabian military utilises American and British weaponry while it commits genocide.

The coverage of the alleged chemical attack in Salisbury on the Russian double agent Sergei Skripal highlighted the manner in which journalists accept government information with little or no scrutiny. It played a major part in whipping up an atmosphere of hysteria and promoted the idea that those who questioned the flawed and constantly shifting government narrative were conspiracy theorists in the service of the Kremlin.

Where dissenting opinions have unexpectedly surfaced when interviewing ostensible pillars of the establishment, the reactions of interviewing journalists have been illuminating. For instance, Major General Jonathan Shaw, a retired former Chief of Staff for UK Land Forces, was abruptly cut off during an interview with Sky News when he challenged the claim that the Syrian government would need to use chemical weapons in Douma when it had practically won the war against the Islamist insurgents. On the matter of the alleged Douma chemical attack, the former British ambassador to Syria, Peter Ford, invited a BBC Radio Scotland journalist to “please engage your brain” when explaining the illogicality behind assuming Bashar al-Assad’s culpability in launching a chemical attack which would serve to, in Ford’s words “pluck defeat out of the jaws of victory.”

An objective reading of trends reveal that much of the mainstream media has seemingly turned into a propaganda mouthpiece for Western governments and institutions such as NATO.

On that point it is worth noting that Udo Ulfkotte, a late German journalist who once served as an assistant editor for Frankfurter Allgemeine Zeitung, claimed in his book Gekaufte Journalisten that most Western European journalists of note are on the payroll of the Central Intelligence Agency, and that he was one of them. Ulfkotte even asserted that the whole content of articles can be written by intelligence agents.

Ulfkotte is not the only one to have made such an admission. Frederick Forsyth admitted that he worked for the British Secret Intelligence Service and Roger Auque, a French investigative journalist and war correspondent, disclosed before his death that he had spied for Israel’s Mossad.

It is not difficult to guess why journalists can be used by intelligence organisations. They function in the midst of events ranging from national politics to those with geopolitical implications. The news agencies for which they work help shape public perception of events and naturally governments are interested in feeding the public with a narrative which is favourable to what is perceived to be the national interest. Thus, MI5, the British Security Service, was key to a strategy of feeding the British press with disinformation during ‘The Troubles’ in Northern Ireland. In his memoirs, Robert Baer, a former CIA agent, claimed that he and other intelligence agents were given millions of dollars to undermine Yugoslavian unity. He revealed that newsreaders were given prepared announcements which had been composed by the CIA. The objective was to spread hatred and nationalism.

While the revelations of former journalists and intelligence operatives ought not to serve as the basis to discredit wholesale the role of the established media, it should, taken together with the known instances of press disinformation associated with recent American wars in the Middle East, form the rationale for people to exercise caution when reading and processing the information and opinions disseminated by the mainstream press.

Further, the implications of the US Telecommunications Act of 1995 should be borne in mind. This piece of legislation, sponsored by corporate media lobbies and signed into law during the administration of President Bill Clinton, represents the basis under which the American media became corporatized. This is because the Act created the conditions to enable around 90% of the media to be owned by just six media conglomerates: Time-Warner, CBS, Viacom, News Corp, GE and Disney.

The buying up of previously independent outlets has, some argue, has served to erode the independence and the integrity of journalism. Many prominent journalists have effectively become ‘pens for hire’, or, to coin a word originated by Gerald Celente: “Press-titutes”.

Both government and mainstream media appear to be fearful of the scrutiny brought by certain sections, though not all, of the independent media. They are weary about the fact that increasing segments of the public are becoming aware of the shortcomings of the mainstream media and are questioning many of its flawed narratives.

This clamp down on dissent by google bears distinctly sinister overtones. The attempts to pathologize and to demonize those who refuse to submit to Establishment narratives has to be resisted lest we slip into an Orwellian dystopia. It would not be an exaggeration to assert that these policies ought to be considered as a form of book burning.

Thus, it is important to remember these words:

“If they want to burn it, you need to read it.”