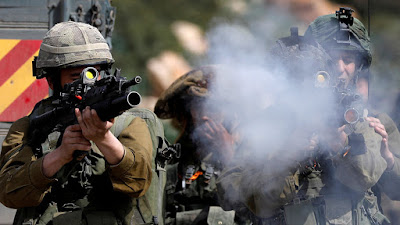 When I think of army snipers, my mind veers to the duel between Vasily Zaytsev and ‘Major Koenig’, respectively of the Soviet and German armies seeking each other out amid the wastelands of war-ravaged Stalingrad.

Of course, this battle of wits between the reputed best snipers of the Red Army and the Wehrmacht has been found to be most likely a stellar piece of Second World War myth-making, although the capability of Zaytev and many trained snipers of the German military is no myth.

Snipers operate stealthily from camouflaged locations, but it is not necessarily a safe and cosy job picking off unknowing victims from a distance, since in a war between well-trained and equally matched armies, they can be infiltrated behind enemy lines and operate in highly dangerous circumstances. Snipers may thus function as intelligence gatherers as well as taking out where possible important commanders of the opposition.

So far as the snipers who serve the Israeli Defence Forces are concerned, one can only hold them in the utmost contempt for shooting unarmed Palestinian civilians to death and deliberately maiming them during what can only be described as massacres and not “clashes” as a good number of Western news agencies have insisted on referring to the Gazan demonstrators who seek the ‘Right to Return’ to the lands from which they were ethnically cleansed seventy years ago.