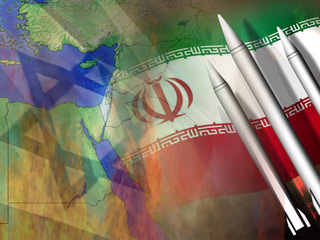 The recent presentation made by Binyamin Netanyahu purportedly detailing a secret Iranian programme aimed at acquiring a nuclear weapons capability is the latest in a long-term effort on his part to obtain United States assistance in destroying Iran. But the actions of the Israeli prime minister are not only ironic and hypocritical: they bring into focus the connection between the purposeful destructions of Iraq and Libya on the one hand and the attempt to destroy Syria, foment conflict in Lebanon and neutralise Iranian military power on the other. Few Americans are aware of this two decade-long grand strategy followed by successive United States administrations because the compartmentalization of events, short-term memory of the public and government propaganda have all served to murky the fundamental picture, that is, one in which the United States continues to follow a policy of taking down countries which pose a threat to the state of Israel. It is a policy which was adopted without recourse to public debate despite the serious ramifications it has had in terms of the cost to American prestige and an ever increasing national debt.

Most of the world’s major national intelligence services have long concluded that Iran has no nuclear weapons development programme. This includes the intelligence community of the United States and up until recently -if Binyamin Netanyahu is to be believed- Israel’s Mossad. A debate within Iran’s political, military and intelligence circles apparently ended with the nation’s supreme leader ruling against the development of nuclear weapons.

The irony is not lost in the scenario of the leader of Israel decrying the acquisition of nuclear technology by another nation, one that is a signatory state to the Treaty on the Non-Proliferation of Nuclear Weapons and subject to the stringent conditions of the Joint Comprehensive Plan of Action reached between Iran and the ‘Five Plus One’ countries, when Israel is in possession of an undeclared arsenal of nuclear, chemical and biological weapons. Israel’s own nuclear weapons programme, which began with the express disapproval of President John F. Kennedy who felt that it would create a nuclear arms race in the Middle East, involved the practice of a grand deception by David Ben Gurion who insisted that the Dimona reactor was for research purposes only and not for the production of plutonium.

A pungent whiff of hypocrisy pervades Netanyahu’s presentation. Israel’s nuclear arms programme has not only been shrouded in secrecy but has involved acts of criminality which according to FBI documents declassified in June 2012 allegedly involved Netanyahu himself. Netanyahu later issued a gagging order directing the unindicted ringleader of a nuclear smuggling ring to refrain from discussing an operation known as ‘Project Pinto’. Israel spied on nuclear installations inside the United States and in the 1960s and it stole bomb-grade uranium from a US nuclear fuel-processing plant.

Netanyahu’s speech is the latest in a campaign by Israel to ignite a war against Hezbollah in Lebanon and Iran, a plan which is intimately linked to the effort to destroy Syria over the past seven years.

The war in Syria represents the combined efforts of the United States, Israel and Saudi Arabia to destroy the so-called ‘Shia Crescent’ of Iran, Syria and Lebanon (Hezbollah). The centrality of Israel in this effort was made clear by Roland Dumas, a former foreign minister of France in 2013. But Israel, along with the United States and Saudi Arabia, has been enraged by the fact that Bashar al-Assad’s secular government with the help of Russia, Iran and Hezbollah, has practically defeated the Islamic fanatics who were introduced into Syria for the purpose of overthrowing Assad in order to balkanise the country and stop Iranian arms shipments to Hezbollah in Lebanon.

The reason why Israel wants Iranian aid to Hezbollah cut off and the organisation destroyed is not hard to fathom. Hezbollah is the only armed force within the Arab world willing and capable of taking on the Israeli military. Israel has for long coveted southern Lebanon up to the River Litani. But Hezbollah has twice inflicted humiliating defeats on Israel: first in 2000 when Israel was forced to withdraw after an 18-year occupation of the southern part of Lebanon which had commenced with a bloody invasion, and secondly in 2006 when Israel was forced to withdraw after sustaining heavy losses during a 34-day conflict.

Apart from the aforementioned goal of breaking the conduit between Iran and Hezbollah, the balkanisation of Syria would mean that any of the successor states would find it difficult to make a claim for the Golan Heights which Israel conquered in 1967 and which it illegally annexed in 1981. Israel is also supportive of the idea of a Kurdish state being created out of Syria as a means through which the transfer of oil and gas could be facilitated.

Much evidence exists of a pre-existing Israeli plan to destroy Syria. The Yinon Plan of 1982 and a series of position papers produced by Israel-friendly neoconservative ideologues in the United States (the Project for the New American Century’s ‘Rebuilding America’s Defenses - Strategy, Forces and Resources for a New Century’ in 2000) as well as for the Israeli government (‘A Clean Break: A New Strategy for Securing the Realm’ in 1996) bear this out. Each document clearly calls for the neutralising or the “rolling back” of several states including Syria.

The Yinon Plan, the name given to a paper entitled ‘A Strategy for Israel in the 1980s’ which was published in February 1982 in Kivunim (Directions), a journal written in Hebrew, set out Israel’s enduring aim of balkanising the surrounding Arab and Muslim world into ethnic and sectarian mini-states. Egypt, Lebanon, Syria and Iraq were prime candidates.

It was not a unique or suddenly arrived at policy, but simply set out in detail an overarching policy pursued by Israel’s leaders since the founding of the state. For  instance, the diaries of Moshe Sharett, an early prime minister of Israel, laid bare David Ben Gurion and Moshe Dayan’s aim of weakening Lebanon by exacerbating tensions between its Muslim and Christian population in the course of which Dayan hoped that a Christian military officer would declare a Christian state out of which the region south of the River Litani would be ceded to Israel.

A crucial point to mention is that the policy of the United States towards Syria and others is congruent with that of Israel. In fact, America has been pursuing a two-decade long strategy aimed at destabilisation and balkanisation regardless of the political stripe of the president in office. After the attack of 9/11, the United States set in motion a plan, in the words of retired U.S. General Wesley Clark, “to take out seven countries in five years, starting with Iraq, and then Syria, Lebanon, Libya, Somalia, Sudan and, finishing off, Iran”.

The secular nations of Iraq, Syria and Libya had no links to the Sunni Islamist al-Qaeda cell which purportedly carried out the attacks on 9/11. Neither did Shia Iran. Yet, America foreign policy has been geared towards destroying nations who happen to oppose Israel and who are supportive of the Palestinian cause.

While the adoption of this policy remains officially unacknowledged, the modus operandi by which the United States has sought to destroy these countries is clear. A succession of position papers as well as the intended effect of United States and NATO interventions point to the exploiting of ethnic and sectarian conflicts as well as the use of Islamist proxy armies as the standard tactic utilised to bring down governments.

For instance, a Pentagon-funded report by the RAND Corporation in 2008 entitled ‘Unfolding the Future of the Long War: Motivations, Prospects and Implications for the U.S. Army’ explicitly refers to the need to foment conflict between Sunni and Shia Muslims as a means to the end of controlling the resources of the Middle East.

Another tactic alluded to by a 2012 document created by the Defense Intelligence Agency is that of declaring ‘Safe Havens’ -a term synonymous with the often used ‘No-Fly Zones’- ostensibly as a humanitarian policy, but which is a technique used to shield and preserve areas controlled by Islamist insurgents. It was utilised by NATO forces as a means of protecting the al-Qaeda-affiliated Libyan Islamic Fighting Group during its campaign to overthrow the government of Muammar Gaddafi, and an attempt was made to implement this prior to the fall of the al-Nusra-controlled city of Aleppo.

America’s Founding Fathers warned against getting involved in foreign entanglements, yet it devotedly follows a Middle East policy that clearly benefits the interests of another nation state. It is a policy which risks setting off a major regional war based on sectarian lines as well as embroiling it in a conflict with nuclear armed Russia.

For Israel, the goal remains the establishment of its undisputed hegemony in the Middle East. However, while an economic rationale predicated on relieving Europe of its dependency on Russian gas via a pipeline from the gulf is occasionally referenced, there has never been a comprehensive articulation of what America’s fundamental interests are in destroying Syria and Iran.

Pursuing such a policy without having had a full and thorough public debate tends to confirm key areas of dysfunction in the American system of governance. First it highlights the power and influence of those lobbies associated with Israeli interests and the Military Industry, and secondly, the unchanging nature of this policy which has been followed by the respective administrations of George W. Bush, Barack Obama and Donald Trump provide evidence that what Michael J. Glennon terms the ‘Madisonian’ institutions of state are no longer accountable in the manner which people still think they are. Instead power in regard to crucial issues on American national security rests with an unelected group of people outside of the separated organs of government: what Glennon, a professor of law at Tufts University, refers to as ‘Trumanite’ institutions.

The implications for the health of American democracy are all too apparent.

The pursuit of a strategy which has served to diminish American esteem among the global community as well as adding to the increasing national debt represents a catastrophic failure not only on the part of the political class, but also on the part of the mainstream media, which has consistently presented a narrative devoid of its true context. The intellectual community comprised of university academics and scholars working for think tanks must accept a large share of the blame.

Binyamin Netanyahu’s speech, a shameless attempt at goading the United States into breaking its obligations under an international agreement as a prelude to fighting a war which would serve Israel’s interests, ought to ignite a full and transparent debate on American national security policy in the Middle East.

A failure to do this risks future costly disasters which would dwarf the debacles of Iraq, Libya and Syria.