Roll Call of Death: The Tragedy Of A Fair Number of West African Military Officers Who Graduated From Sandhurst 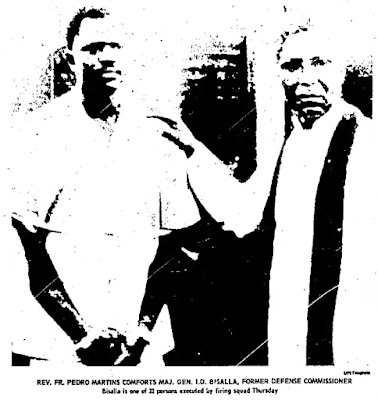 On June 26th 1979, six senior military officers were executed by firing squad at Teshie Military Firing Range in Accra by decree of the Armed Forces Revolutionary Council (AFRC) which came to power after an uprising in the junior ranks of the Ghanaian Armed Forces.

Four of them had graduated from the Royal Military Academy Sandhurst, and another graduate had been executed alongside the former Head of State, General Ignatius Acheampong 10 days earlier.

The following is a list of "Sandhurst men" from Nigeria, Ghana and Sierra Leone whose lives were cut short by either assassination or state-sanctioned execution, although it includes one who was killed in action during a civil war and another who died in detention under a military dictatorship.

. Colonel Kur Mohammed; shot to death during the army mutiny of January 1966.

. Lt Col Arthur Unegbe; shot to death by Major Christian Anuforo during the putsch of January 1966.

. Major Chris Anuforo; killed in early August 1966 by soldiers in revenge for his part in executing senior officers during the army mutiny of January that year.

. Major Kaduna Nzeogwu; killed in action in August 1967 during the Nigerian Civil War which largely stemmed from a mutiny in which he was a key participant.

. Lt. Colonel Victor Banjo; executed by firing squad in September 1967 during the Nigerian Civil War on the grounds of treason by the secessionist state of Biafra.

. Major Timothy Onwuatuegwu; a key participant in the January mutiny who shot Brigadier Ademulegun and his wife to death, is believed to have been murdered soon after the end of the Nigerian Civil War. Several narratives exist about how he met his demise.

. Brigadier John Amadu Bangura; executed by the government of Siaka Stevens, Sierra Leonean Prime Minister, in March 1970 for allegedly plotting to overthrow Stevens. Bangura had helped restore Stevens to power after "The Sergeant's Coup" of 1968.

. Brigadier David Lansana; executed for treason in July 1973 for mounting the military coup which deposed Prime Minister Siaka Stevens after a disputed election result in 1967. Lansana had himself not been permitted to assume power by surbordinates who posted him to New York where he served as Sierra Leone's Consul-General.

. General Murtala Muhammed; assassinated in Lagos during an abortive military coup in February 1976.

. Major General Iliya Bisalla was the most prominent figure executed by firing squad after the abortive coup which claimed the life of General Murtala Muhammed in February 1976.

. Major General Neville Odartey-Wellington; a member of the Supreme Military Council led by Lt. General Frederick Akuffo, was killed while attempting to crush a military uprising on June 4th 1979.

. Lt. General Akwasi Afrifa; executed by firing squad on June 26th 1979 following an uprising by the junior ranks of the Ghanaian armed forces.

. Lt. General Frederick Akuffo; executed by firing squad on June 26th 1979 following an uprising by the junior ranks of the Ghanaian armed forces.

. Major General Robert Kotei; executed by firing squad in on June 26th 1979 following an uprising by the junior ranks of the Ghanaian armed forces.

. Colonel Roger Felli; the former Commissioner for Foreign Affairs who was executed by firing squad in on June 26th 1979 following an uprising by the junior ranks of the Ghanaian armed forces.

. Major General Shehu Musa Yar'Adua; died while imprisoned by the regime of General Sani Abacha in December 1997. He had been charged with plotting to overthrow the military regime of Abacha and sentenced to death, although this was later commuted.

. Major Johnny Koroma; declared dead after fleeing to Liberia after he was one of the first persons indicted on on charges of being a war criminal. He is believed by some to have been secretly executed by Liberian warlord Charles Taylor who is said to have had ‘Mosquito’ Sam Bokarie, a commander of the Revolutionary United Front (RUF) killed in order to coverup his involvement in bankrolling the RUF.

* Major Nzeogwu was a Lt. Colonel in the secessionist army of Biafra.

* Lt. Colonel Banjo was a Brigadier in the secessionist army of Biafra.

* Major Onwuatuegwu was also a major in the Biafran Army.

* There are about four stories about how Onwuatuegwu met his demise:

1. Onwuatuegwu was killed on the Cameroon border by Northern soldiers as payback for the murder of the Sardauna of Sokoto, as well as a number of Northern military officers during the January 1966 mutiny.

2. Onwuatuegwu was killed by Yoruba soldiers who lured him to a hotel in Owerri as payback for the murders respectively of Brigadier Samuel Ademulegun & wife, as well as Colonel Ralph Shodeinde.

3. Onwuatuegwu was killed by Brigadier Hassan Katsina in Kirikiri Prison, Lagos. Katsina is supposed to have flown from Kaduna to put a bullet in Onwuatuegwu's forehead.

4. A slightly different narrative puts the location of his execution as an Enugu prison.

Onwuatuegwu was supposedly shot with 2 other captured Biafran army officers and had been betrayed by certain civilians from Nnewi, the hometown of the Head of State of the secessionist state of Biafra.

Posted by Adeyinka Makinde at 19:53