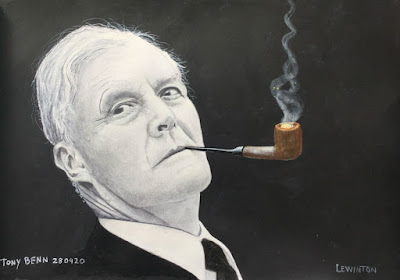 My understanding was always that Tony Benn, the late and influential Labour Party M.P., came to his brand of leftist politics via what may be termed "Christian Socialism" and not Marxism. His reference to "dissent" in his statement regarding "Dissent and Protestantism and Non-Conformity" presumably includes the radical movements of Diggers and Levellers, both of which developed around the time of the English Civil War.

"I was brought up on the bible. But I'm not practicing. First of all I think that the moral basis of the teachings of Jesus - Love thy neighbour - is the basis of it all. Am I my brother's keeper? An injury to others is an injury to all, you do not cross a picket line; and that comes from the book of Genesis and not the Kremlin. And my mother brought me up on the Old Testament, in the conflict between the Kings and the Prophets, the Kings who had power, and the Prophets who preached righteousness, and I was taught to believe in the Prophets and not the Kings. I mean, my cultural roots of Dissent and Protestantism and Non-Conformity all come from there. But it doesn't mean I'm trying to impose my religion on anyone else, or that any of the mysteries - the virgin birth or the ascension - interest me in any way. But I think if you are going to relate to a society with arguments that make sense, you have to relate to your common cultural background. And if I say, when Cain killed Abel in the garden of Eden - am I my Brother's keeper? - and that's really why we don't cross a picket line, people register. Whereas if I say, in my particular socialist sect it makes it clear that it's a treachery to the working class to cross a picket line, they might say, oh hell, there he is, he's at it again. So it's partly presentational. It's a cultural, historical, traditional presentation of that."

Posted by Adeyinka Makinde at 13:32