The October Surprise and the Futility of the American Electoral Process 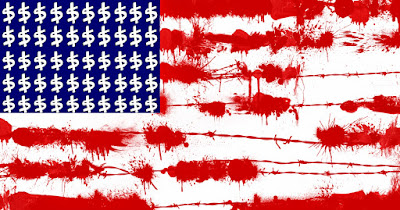 The American presidential selection process with its debates and dirty election tactics including the ‘October Surprise’ enthralls an electorate that is severely divided by its ideological and identitarian positions and which continues to invest its hopes in the supposedly transformative powers invested in the office of president. But they are being ruthlessly played by a system in which ‘change’ is an illusion and will remain elusive if the system is not subject to root and branch reform.

Well it is October, and the idea of springing an 'October Surprise' in the presidential election season in order to alternatively damage and boost the prospects of a presidential candidate has become something of an election pastime.

Quite a few alleged 'October Surprises' are still subject to heated debate and have defied resolution so far as the issue of origin and intent are concerned. These include the allegation that Henry Kissinger and Richard Nixon sabotaged peace talks with the Viet Cong to do down Hubert Humphrey's prospects in 1968, and that Ronald Reagan's team made a deal with the Iranian mullahs not to release the US hostages until after the 1980 election.

In more recent times, the Benghazi incident of September 2012 is suspected by some to have been triggered by an internecine struggle within the US intelligence community. A 'Mormon' faction of the CIA is claimed to have orchestrated events so as to favour the Republican presidential candidate, Mitt Romney while he campaigned against the incumbent Barack Obama.

So is FBI director James Comey's decision to reopen the inquiry into the Hillary Clinton e-mail scandal one in a long line of October surprises? It certainly bears the hallmarks of one.

But for what ultimate reason?

It could be because Comey himself may have Republican Party sympathies and has done it solely for partisan reasons. Alternatively, it could be because a faction of the American ruling elite have decided at the last minute to ditch Hillary Clinton in favour of Donald Trump because they see Trump as someone who will nonetheless enable them to fulfill their goals.

For instance, even if Trump wants rapprochement with Russia, the US oligarchs can still have a war with Iran. And if they are crazy enough to risk war with Russia, they can risk one against China. Trump's bellicose comments regarding Iran and China make these goals attainable.

The American empire continually seeks to assert control over the monetary and natural resources of other nations. Preserving the precedence of the dollar as the global reserve currency as well as initiating the destruction or marginalisation of recalcitrant nations remains a priority if its post-World War economic domination and its hegemony in the post-Cold War unipolar system are both to be sustained.

There is an indubitable logic behind the argument that a victory by either Hillary Clinton or Donald Trump, two of the most unattractive candidates in recent history,  cannot substantively alter the course of the United States. The political system will remain corrupt if there is no reform of electoral rules enabling politicians to be bought by the highest bidder.

Added to the malady of 'pork barrel' politicians is the fact that economic markets are rigged by the Federal reserve and by the U.S. Treasury. The financial sector of the United States is geared towards extracting economic surplus and capitalizing on debt obligations paying interest to that sector.

The governance of America is effectively one which is structured to serve the interests of an oligarchy. And while some have poured scorn on making an analogy between the resultant hierarchy of class relationships to that of a feudal order, surveys back up the claim that government policies do not often reflect the needs of the mass of people. Surveys, such as that conducted by political scientists Martin Gilens and Benjamin Page, show that the majority of the American public have little influence over the policies adopted by incumbent administrations. The views of rich people have a much greater impact on policy decisions than those of middle-income and poor Americans.

The presidents and prime ministers of the Western democracies effectively work for the mega-banks and powerful corporations. While a President Donald Trump may set a different tone in the White House, he will not be able to overcome the fundamental workings of the system. While Hillary Clinton is correctly seen as a career politician immersed in the system, Trump, it should be reminded, is a product of the same system.

It is not difficult to work out the control exercised by banks and corporations on those in political office because they ensure that politicians are effectively on their payroll through campaign donations and remunerations paid for speaking engagements. This ensures that the holder of the office of president and those who sit on congressional committees will do their bidding. As Huey Long, the one time Louisiana state governor and senator once put it, officeholders are “dime a dozen punks.”

The Mega-banks such as Goldman Sachs, the large corporations such as those attached to the military industrial complex such as Lockheed Martin, the extractive industries as illustrated by the activities of the Koch brothers, and powerful interest lobbies such as those concerned with Israel, are all complicit in influencing government legislation and policies which may often run counter to the public interest.

These include the formulating of international trade agreements that are detrimental to American workers and consumers, the approval of projects which are not environmentally sound, adherence to ‘too-big-to-fail’ policies involving public-funded bailouts, the failure to prosecute criminally culpable bankers and the promotion of American interventions in foreign countries in the form of fomenting internal insurrections and the use of the United States armed forces in wars.

The notion that government works on behalf of big business is not a new one. Indeed, American history is replete with examples of where its intelligence agencies have been deployed or its military has been used to enforce the interests of corporations. Aside from the Cold War interpretations given to the machinations of the Dulles Brothers during the Eisenhower years, both were behind the overthrow of the governments of Iran and Guatemala, respectively in 1953 and 1954, for the benefit of American corporations. Their association with the powerful law firm Sullivan and Cromwell provides an example of the link between big business and government policymaking. Both had been corporate lawyers and the companies they worked for benefited from regime change.

American oil firms were well represented among a consortium of businesses in a renegotiated oil deal with the American-backed regime in Iran while the United Fruit Company reclaimed its fiefdom in Guatemala. The intention of restoring American corporate interests was crucial to the attempt to invade Cuba and destroy the Castro government as it was in the case of the successful violent overthrow of the government of Salvatore Allende in Chile in 1973.

The use of the US military as enforcers of America’s corporate interests is also nothing new. General Smedley Butler, in 'War is a Racket', plainly admitted that he was a "gangster for capitalism"; a racketeer for big business as represented by Wall Street and the mega-banks. This has been an important factor in the United States reinforcing its dominance both hemispherically and globally.

Today, the animosity towards Russia and the resulting dangerously confrontational policy towards this nuclear armed power via the fomenting of conflicts on its borders as well as resistance to Russian anti-Jihadist action is Syria is rooted in Russia having broken away from the economic stranglehold held by United States corporate interests during the tenure of Boris Yeltsin. It is an animosity set to endure so long as the United States cannot control Russia’s oil, natural resources and public utilities.

Notwithstanding Trump’s conciliatory approach towards Russia, the war agenda, which has markedly contributed to the national debt, will continue regardless of who is elected in November. The Turkish invasion and increased American activity in parts of Syria have been designed to effectively partition the country and keep the conflict going, making it difficult for a President Trump to reach an accommodation with Russia. Any appointments made by Trump would have to be approved by the lobby-controlled Congress and he would have to rely on many civil servants in the mould of Victoria Nuland, the arch-neoconservative behind the 2014 coup in Ukraine, who has served both Republican and Democrat administrations

The present election campaign has brought into sharp focus the subversion of the democratic process in the interests of those who make major contributions to aspirants for political office. It demonstrates how the party political system, a duopoly of Democrat and Republican parties, both beholden to Wall Street interests, does not serve the needs of the overwhelming majority of the population.

Neither candidate has specifically advocated a concrete course of action that would negate the effect of the Supreme Court decision in the case of Citizens United of 2010 which allowed unlimited money in the electoral process, including that of a constitutional amendment. Although Trump once mentioned that the Federal Reserve should be audited, neither he nor Clinton have made any proposals in relation to constricting the modus operandi of the financial markets.

In the meantime, the American electorate continues to bicker over ideological and identitarian positions and invest their hopes and energies in the supposedly transformative powers invested in the presidency.

Americans need to wise up on the fact that they are being played by a ruthless system. ‘Change’ is an illusion and will remain elusive if the system is not subject to root and branch reform. Election debates, fomented scandals and October surprises notwithstanding, nothing will change in America until there is a fundamental rewiring of the existing political and economic structures.

Anything short of this means they are acting merely as cheerleaders within an elaborate dupe posing as democracy.