Receiving the Jedsey Journal's John D. White 'Man of the Year' Award for 2010 from Jed DiMatteo. The award "acknowledges a significant perpetuation of the loyalties, comradeship and spirit of Jersey City during the previous year."
PUB TOUR stop at the Grapevine where JJ Man of the Year, Ade Makinde poses with group after doing a book signing of his JERSEY BOY book. Ade also set the record for coming the greatest distance to attend a Badd Ladd Day celebration.
ADE MAKINDE MAKES MOST OF HIS WEEKEND IN "JERSEY BOY" LAND

Ade Makinde agreed to fly over from London to receive his Man of the Year Award but he wanted to make the most efficient use of his time here and perhaps get in some PR work for his JERSEY BOY book. He ended up without a minute to spare during his extended weekend visit. Besides his long night of touring pubs with the friends of Badd Ladd; he scheduled book signings (one incorporated into the Pub Tour); he also did several TV and radio interviews, he reached out to Hollywood connections regarding a movie contract; Ade made two trips to New York City and State to visit family and a friend; and he even had time to cover the Jersey City St Patrick's Day parade for the JEDSEY JOURNAL.
Jed introduced Ade to Mike Ransom to set up an interview on Bayonne Community TV
Ade covers St. Patrick’s Day Parade for the Jedsey Journal
Ade Makinde had “met” Jelynne Jardiniano on Facebook and they made a date for him to do a book signing at her LITM Restaurant on Newark Avenue when he came for a visit.  (Picture by Emily August for LITM.)
Later in the evening, the DePaula family is among the crowd that watches a movie of a vintage Frankie fight on LITM’s giant screen.
Text and captions by Jed DiMatteo
See this story and others in the Jedsey Journal March Madness Report - April 2011 -vol. 24-# 2 on line at HTTP://jedseyjournal.com
﻿
Posted by Adeyinka Makinde at 22:02 No comments:

Wladimir Klitschko versus David Haye: A Heavyweight Battle of the Age 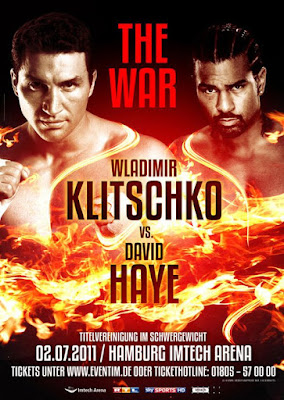 It was the case up to a period in the not too very distant past that a fight for the heavyweight championship of the world was indisputably the ‘Richest Prize in Sports’, and the heavyweight boxing champion was the acknowledged ‘Emperor of Masculinity’.

Not so anymore. The ebb and flow in the fortunes of the heavyweight division, the barometer of the overall health of the sport, has been on a downward trend. Indeed, it is the case that many pundits are likely to say that never in the sports’ history has the prestige and popularity of its premier division spiralled to such a low point.

England’s David Haye, a former world cruiserweight champion who presently holds the WBA version of the splintered title, has been extremely vocal in expressing his views as to the reason for this nadir: the Klitschko brothers, Wladimir and Vitali.

He describes both as being ponderous, boring to watch and thoroughly devoid of charisma. Wladimir who holds the IBF, IBO and WBO titles and Vitali, the WBC champion have both dominated the heavyweight division since the retirement in 2003 of Lennox Lewis, the last undisputed titleholder.

Just why the amazing feat of two well-educated brothers’ simultaneously holding versions of the world title has failed to capture the public imagination apart, that is, from their Ukrainian motherland and adopted German homeland, is something truly to ponder.

Perhaps it is the fact that they are non-Americans dominating a division which for decades had been the preserve of the American heirs of champions such as Jack Dempsey and Joe Louis. American interest noticeably wanes when champions are foreigners. In fact, when HBO, the American cable television network, announced one year ago that it would no longer be screening any heavyweight title fights, its sports president, Ross Greenburg, made clear that it was the paucity of credible American challengers which lay at the heart of the decision.

Greenburg had mentioned that the only heavyweight contest worth screening would be one involving the Ukrainian and the Englishman. Klitschko versus Haye is the richest bout outside of a fight between Manny Pacquiao and Floyd Mayweather.

Standing at 6 foot 6 and with an optimum fighting weight of around 240lbs, Klitschko is three inches taller than the former world cruiserweight champion, Haye, who is also outreached and outweighed.

While his style is not an aesthetically pleasing sight to the purists, Klitschko’s left jab has served him well in keeping most of his opponents at bay while he sets them up for an arrow-straight right cross. He has an 85 per cent knockout tally and will be looking for his 50th knockout when he encounters Haye.

Haye’s record in securing 23 knockouts in the 25 wins of his career is also impressive. And although a relatively recent graduate to the heavyweight division, he has proved that he has the power to knock over and stop larger men. His best weapon against Klitschko will be his hand speed.

Both men have weaknesses. They have at times been accused of lacking stamina; the decisive factor in Klitschko’s defeat against Ross Puritty, and Haye in his only career loss to Carl Thompson as a cruiserweight. Perhaps the Ukrainian’s greatest vulnerability lies with his ‘chin’, that is, his ability to absorb a heavy blow. His style of keeping his opponents at a safe distance with his long reach, and then tying them up while leaning in with the full weight of his heavy frame has served him well.

It is a ploy which the lighter Haye will undoubtedly be working to counter. Despite a tendency to throw his punch combinations wildly, he stuck rigidly to a well-worked out strategy to defeat the behemoth-like Nikolai Valuev to win his title.

Apart from a physical plan, Haye has consistently employed a psychological tactic against his opponent with infantile-like relish. His verbal jibes and lack of courtesies including the display of a T-shirt bearing his triumphant image bestriding the decapitated torsos of both Klitschkos have gone beyond the boundaries of good taste and sportsmanship.

That notwithstanding, this promises to be the most enthralling heavyweight tussle since Vitali Klitschko’s bout with Lennox Lewis in 2003. Haye is the best of as poor a pool of heavyweight talent as has existed since the inception of the sport, and if it lives up to the high expectations that it has engendered, not least from the combatants who have each promised to score a victory by stoppage, it will go some way in restoring some prestige to the division with arguably the most compelling narrative history of all sports.

Posted by Adeyinka Makinde at 10:54 No comments:

MALCOLM THE LEADER: A Response to Ozodi Osuji’s ‘Thoughts On The Personality of Malcolm X’