The Glory of Medieval Benin Portrayed by a Revered Artist 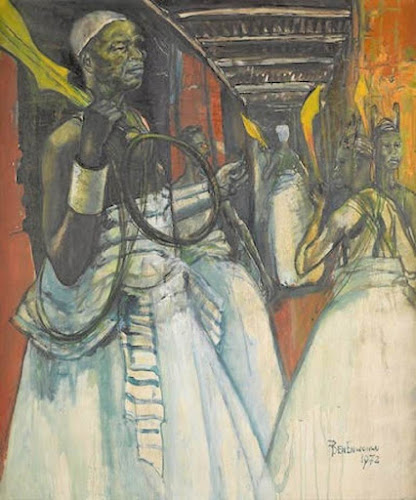 The Court of the Oba of Benin by Ben Enwonwu

The Court of the Oba of Benin was a work created in 1972 by the Nigerian artist Benedict Chukwukadibia Enwonwu (1917-1994).

It depicts an Oba (King) of Benin holding a yellow royal ceremonial sword while being attended to by chiefs who also hold ceremonial swords. The King is wearing a white skull cap while dressed in white folds of cloth rather than the more formal coral bead regalia. The red earthen walls indicate that the ceremony is being held within the royal palace in Benin City.

Ben Enwonwu was born in Onitsha, a city in Igboland with historical and cultural connections to the Edo Kingdom of Benin. He taught at Edo College in Benin City, and was a professor at the University of Ife when he produced this painting.

Posted by Adeyinka Makinde at 11:49 No comments: 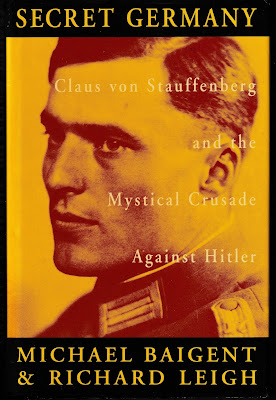 Secret Germany: Claus von Stauffenberg and the Mystical Crusade Against Hitler by Michael Baigent and Richard Leigh. Published by Jonathan Cape in 1994.

Colonel Count Claus Graf von Stauffenberg is widely known as the man who planted a bomb in a briefcase which almost succeeded in killing Adolf Hitler. Secret Germany: Claus von Stauffenberg and the Mystical Crusade Against Hitler, a book which I purchased back in August 1994, sought to explore Stauffenberg not in the linear narrative format or by focusing on the Bomb Plot against Hitler, and instead investigated the influence on him by the German symbolist poet Stefan George, one of whose works was entitled “Secret Germany”. Stauffenberg allegedly shouted “Long live Secret Germany” (some claim that it was “Long live Holy Germany) just before a firing squad opened fire. The book makes references to figures such as Heine, Goethe, Thomas Mann, Wagner and others who examined what may be termed “The German Soul”. It examines German history, as well as the philosophical and spiritual content of the ideas which shaped German nationhood up to the Third Reich.

The best book that I have read about a military figure is Secret Germany: Claus von Stauffenberg and the Mystical Crusade Against Hitler.

Why do I rate it highly?

Because of what it is not.

The book is not a conventional biography. While it does cover biographical details, as well as Colonel Stauffenberg’s pivotal role in the July 20 plot to assassinate Adolf Hitler, it delves into the ideas and the belief system which shaped the man, as well as the epochs in German history which shaped the German people.

Stauffenberg reportedly shouted the words “Long live Secret Germany” prior to being shot dead by a firing squad after the failure of the anti-Hitler coup that he led. Those words were pregnant with meaning and open the window through which Baigent and Leigh assessed his belief system. There are thought-provoking reference points to esotericism, mysticism, religion, poetry, and the shaping not only of the subject, who was an aristocrat by birth, but also of the German people and the powers that unleashed their domination of culture through music, philosophy and economics. It also explores the factors influencing the German tendency towards martial belligerence and hyper-nationalist sentiment during the rise of Prussia, the era of the Kaiser and the Third Reich.

The reader is reminded that Heine, the German poet and thinker, felt that Christianity served as a bulwark of sorts to control the “battle lust” of the German people. Even after centuries of official Christianisation, he believed that this religion kept a tenuous lid on the warrior tendencies of the German race, among who could arise a demagogue-thinker who would be able to use his primitive powers to summon up the demonic forces of German pantheism.

The “battle lust” that led to German defeat and near annihilation in two World Wars was something predicted by Goethe, who during the Napoleonic age cautioned his people about their embrace of nationalism and militarism. As the authors point out in the chapter entitled “Culture and the Spirit”, Goethe predicted that Germany would come to disaster if its people pursued the path of militarism, and so called on the German people to invest in culture and the spirit, that is, conquer the world with their talents in music, philosophy, trade and the sciences.

By initially supporting the policies of Adolf Hitler, this is something which Stauffenberg did not adhere to. But his action in seeking to end Hitler’s life in an operation which was not likely to succeed, was designed from his perspective to serve as an atonement for the sins of his nation.

Research Interests, Publications and Citations of my Writings - Updated July 2020 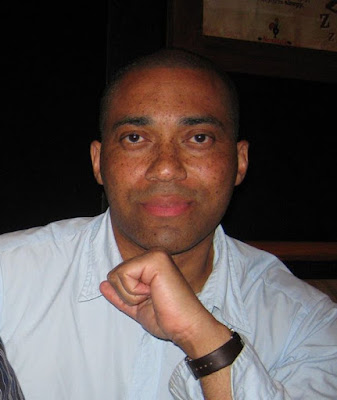 "The Africans: Boxing and Africa," in The Cambridge Companion to Boxing, edited by Gerald Early, New York: Cambridge University Press, 201 99-117.

Work cited: "Democracy, Terrorism and the Secret State: From the Era of Gladio to the War on Terror." Global Research dot Canada, Jan. 2013.

Work cited: Book review of "On Intelligence: The History of Espionage and the Secret World.” Global Security and Intelligence Studies, Vol. 2: No. 1, Article 8 (2016).