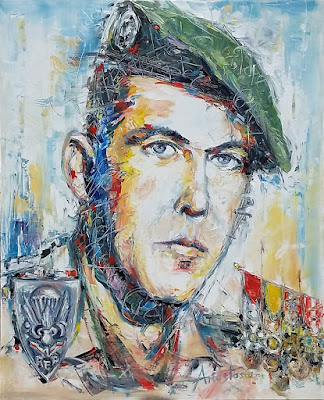 “...Once the State and the nation have chosen their path, military duty is spelled out once and for all. Outside its guidelines there can be, there are only lost soldiers.”

Born in France in 1925 on the border with Belgium, the young Roger Degueldre contrived to join the French Foreign Legion under an assumed name and saw action first in Indochina and then, after a correction of his name and a transfer the airborne regiment of the Legion, in Algeria.

He was rewarded with medals for his service in both theatres.

Degueldre however became disillusioned with French policy in Algeria. Specifically, he considered de Gaulle’s decision to direct the French people towards accepting the inevitability of Algerian independence as a “betrayal” of de Gaulle’s pledge in 1958 at Mostaganem to keep Algeria French.

He banded together with like-minded soldiers and joined the Organisation de l’Armee Secret (O.A.S.) which had been formed by General Raoul Salan in the wake of the failed Putsch des generaux (Generals’ Putsch) of April 1961.

Tall and blonde, the charismatic and forceful Degueldre, an NCO who had reached the rank of lieutenant, became the de facto chief of operations of the O.A.S. although he was specifically in charge of the Delta Commando.

Degueldre was at the heart of terror outrages in the cities of Oran and Algiers where for a time the O.A.S. struck at any time and place of its choosing. This included Operation Rock n’ Roll which involved the detonating of 120 bombs over a two-hour period in Algiers while independence talks between the French government and the F.L.N. were going on. When the final talks were concluded, O.A.S. gunmen roamed the streets of Oran and Algiers and shot Arabs as they walked the streets.

When de Gaule sent in the Barbouzes, a secret squad of security agents to purge the dissidents, Degueldre was behind the countermeasure that virtually wiped them out. The O.A.S. finally bowed out with a scorched earth policy which involved the burning of the main library in Algiers at the cost of 60,000 books.

But Degueldre paid the price.

One of Delta’s most prominent victims had been Roger Gavoury, the Police Commissioner for Algiers. Deguledre was arrested in April 1962. Tried and convicted by a military tribunal, he was sentenced to death.

His death on July 6th, 1962, before a firing squad at Fort d’Ivry*, an army barracks situated on the outskirts of Paris, was a prolonged and painful one. His agonisingly slow death, recounted to the press by his lawyer Tixier Vignancour, was caused by the fact that only one bullet from the team of 11 shooters pierced his body.

Most of them had refrained from shooting the condemned man.

Vigancour claimed that Degueldre died eleven minutes after the order to fire had been given, succumbing finally after the coup de grace, three bullets was administered.

Three officers who had refused the order to command Degueldre’s firing squad were demoted. The “sympathetic passivity”, as author Geoffrey Bocca termed the attitude of the mainstream French Army, was one reason why de Gaulle had refrained from ordering a mass crackdown on O.A.S. men such as Degueldre, all of whom he described after the Evian settlement as “misguided chiefs and criminal adventurers”.

It was a description which Degueldre, who sang the Marseillaise as he awaited death while tied to a stake, resolutely disagreed with to the end.

* Fort d’Ivry was the site at which Air Force Lt. Colonel Jean-Marie Bastien-Thiry would be executed the following March after participating in the last major attempt on the life of de Gaulle at an ambush in Petit Clamart on August 22nd 1962.

Posted by Adeyinka Makinde at 01:41 No comments: