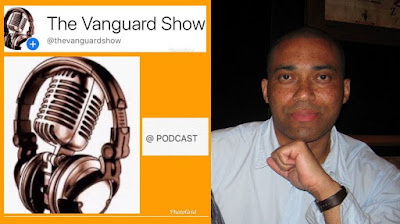 My appearance on "The Vanguard Show", a podcast show hosted by Malik Ismail in Atlanta, Georgia.

We discussed a wide-range of topics that included my biographies on the world boxing champion Dick Tiger and the one on Frankie DePaula, the boxer who was murdered by the Mafia. My writing in general, my YouTube History Channel, my views on Malcolm X, Kwame Nkrumah, African development, the Black Panthers and the global Covid crisis.

Adeyinka Makinde trained for the law as a barrister. He lectures in criminal law and public law at a university in London, UK, and has an academic research interest in intelligence & security matters. He is a contributor to a number of websites for which he has written essays and commentaries on international relations, politics and military history. He has served as a programme consultant and provided expert commentary for BBC World Service Radio, China Radio International and the Voice of Russia.

Miami-born Malik Ismail is a former Panther Minister of Information  of the New Panther Vanguard Movement (formerly known as New African-American Vanguard Movement) whose writings have been published in The L.A. Watts Times, rolling out Magazine, It’s About Time newsletter, The Black Panther International News Service, and he has been profiled in The African Times. Ismail is an Honorary Member of the 1976- 1981 Southern California Chapter of the Black Panther Party.

. Jersey Boy: The Life and Mob Slaying of Frankie DePaula

. Dick Tiger: The Life and Times of a Boxing Immortal

. The Cambridge Companion to Boxing

. "From Panthers to Pimps: Gordon Parks and the Subverting of Black America"

. "Solzhenitsyn: The Price of Blacklisting a Nobel Laureate’s Book"

Adeyinka Makinde is based in London, England.

Posted by Adeyinka Makinde at 12:40 No comments: