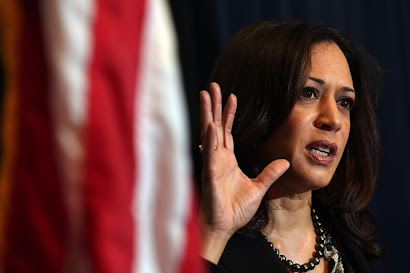 Joe Biden’s selection of U.S. Senator Kamala Harris as his vice-presidential running mate, was lauded by an editorial opinion in the British Guardian as “a safe and historic appointment”. But a cursory examination reveals Harris to be the archetype of what the contemporary U.S. politician has become: One who works ceaselessly for the ‘Donor Class’ and who thus is beholden to powerful lobbies. This has informed her record as a prosecutor and legislator who is committed to the perpetuation of America as a ‘Carceral State’. She is also a servant of the National Security State, which means that she will maintain the bi-partisan arrangement which has ensured that America has remained committed to the militarism which has characterised its foreign policy since the ending of the U.S.-Soviet Cold War.

The selection by Democratic Party Presidential Candidate Joe Biden of U.S. Senator Kamala Harris as his running mate for the forthcoming elections is striking on several accounts. As what is often termed as a ‘Woman of Colour’, Harris’s selection certainly deviates from the typical presidential candidate as being a person who is both male and White Anglo-Saxon. Nonetheless, there is much about her which remains typical of the calibre of candidates for either the presidency or vice-presidency. Many candidates like her have typically been selected from the pool of serving U.S. Senators. They are creatures of one of the major political parties and must have performed some sort of public service. Yet, in Harris’s case there are two noteworthy issues that mark her out as a flawed candidate.

Firstly, her abilities as both a politician and a public servant are rather questionable. And secondly, she represents many of the negative attributes of the modern political operator in either of the parties that represent the duopoly of American politics.

There is much to perplex over her selection by Biden. Harris was a big loser in the Democratic Party Primaries during which her poll-ratings were so low that she was forced to suspend her campaign before formally withdrawing. Her conduct on the hustings marked her as a poor campaigner, and her performance during the televised debates revealed her to be a poor debater.

During the debates, Tulsi Gabbard, a Congressional representative from the State of Hawaii, took Harris to task over her record as a District Attorney in the city of San Francisco. Harris, Gabbard reminded, had put hundreds of marijuana smokers in jail, and later when asked about whether she had ever smoked the substance had responded with a smirky giggle. It speaks of Harris’s grotesque sense of entitlement and rancid hypocrisy to boast about imprisoning people while boldly admitting that she had committed the same crime.

And she shamelessly -and awkwardly- once used this in projecting herself in the context of the identity politics that is so prevalent today. Harris once gave a speech at a forum at which she boasted of having smoked marijuana while alluding to her part-Jamaican origins. But to his credit, her father, the parent of Jamaican parentage, rebuked her for feeding into the stereotype of Jamaicans as freewheeling, ganga-smoking outlaws.

He issued a statement saying the following:

My dear departed grandmothers, as well as my deceased parents must be turning in their grave right now to see their family’s name, reputation and proud Jamaican identity being connected in anyway, jokingly or not, with the fraudulent stereotype of the pot-smoking joy-seeker and in the pursuit of identity politics.

That attempt at gaining an imaginary street cred was mirrored by her painfully contrived assertion that she had been a fan of the Rap Music icons 2Pac and Snoop Doggie before they became famous; implying that she got high while listening to their music during her college years.

Her competence, as well as her integrity, as a public prosecutor was compromised when, as Gabbard revealed during the debate, Harris was found to have been prepared to conceal exculpatory evidence in relation to an innocent prisoner on death row until a court order forced her to reveal the information.

One reason why Joe Biden selected Harris is presumably because he feels that her tough stance on crime will render her immune to attacks by the Republican Party which traditionally finds fault in many Democratic Party candidates as liberal progressives who are ‘soft’ on crime. But while Harris, resolutely proud of her record, insists on describing herself as a progressive, her goals in this area have been anything but progressive. There is an ineluctable contradiction between her posture as a progressive and her record as a prosecutor. This is borne out of her policy of using prisoners -some of them beyond their sentences- as cheap labour. In defiance of a court order, she failed to release ‘Minimum Custody Inmates’, that is, persons who have committed minor crimes on parole. When challenged in court, state lawyers under her control argued that releasing these sorts of prisoners would deny the State of California an important pool of labour. When this line of argument was brought to the attention of the public, Harris claimed that she had no knowledge of the policy.

A crucial defect in Harris’s attempt to portray herself as a progressive who is nonetheless ‘tough on crime’ can be garnered from the fact that her policies have impacted on the poor and the marginalised, and not the well-off. For instance, her policy of prosecuting the parents of children who were truant meant that parents who did not have the financial resources to pay the fines levied on them were sent to jail, a factor which then impacted on the very issue sought to be addressed: the absence of parental direction in the life of the affected children.

Harris’s self-promoted zeal at prosecuting transgressors did not apparently extend to Wall Street and its banks. For instance, she declined to prosecute OneWest Bank for foreclosure violations in 2013. OneWest was the bank for which Steve Mnuchin, the present Secretary of the U.S. Treasury, served as CEO from 2009 to 2015.

Harris’s deeds thus expose her for what she is: the member of a privileged class who irrespective of their professed ideologies and party affiliations serve the monied interests of an oligarch-controlled political system.

It explains Harris’s penal policies geared towards using prisoners as a cheap form of state labour, and her stances on imprisoning those who smoke contraband drugs, as well as those parents who could not pay fines for truant children. A high prison population is good for the business interests that benefit from the nation’s Prison Industrial Complex.

Her failure to prosecute Mnuchin’s bank is consistent with the attitude of the political class that they cannot bite the sources that fund their campaigns and feather their nest eggs. For in America, banks who bring the nation to near economic collapse through their greed and avarice are “too big to fail” and receive bailouts, while the lives of ordinary people who suffer from foreclosure, unemployment and bankruptcy do, it would appear, count for little even to those who label themselves as progressive.

Harris is simply the latest of a litany of politicians who are foisted on the American public because of their pliability to the interests of those who run the major political parties, in this case the Democratic Party. The decision to choose Harris clearly has more to do with her as someone who is capable of being controlled rather than her competence as an administrator and her ability as a political campaigner.

The suspicion that she has emerged because of the calculations on the part of the power brokers in the Democratic Party is an irresistible one. So resolute are they in the quest for maintaining control that they clearly do not mind losing to Donald Trump by offering as a presidential candidate a man whose faculties are clearly in sharp decline, and a woman who is a proven vote-loser within her own political party. The objective of these higher ups in control of the Democratic Party machinery thus would appear to be to ensure that the left-wing or genuinely progressive segment of their party does not displace this control. After all, a defeat by Donald Trump in November will not remove their access to the funding from the oligarchs who sponsor the party whether it controls the White House or not.

A similar scenario holds true for the Republican Party.

The question then is when, if ever, will the insouciant American masses wake up to the fact that they need to remake their political and economic system by removing those mechanisms which enable monied groups to control their political leaders. Their attention for the most part is taken up by the false ideological divide in the duopoly ruling them and the manufactured culture wars which keep them divided along racial and social lines.

To sum up, Kamala Harris typifies the politician of the era who is short on principle, and who is lacking in the ideas required to energise and unite Americans at a period in time when the country is increasingly divided and its global prestige and economic power is in noticeable decline.

Harris, like others including Joe Biden, has nothing new to offer.

She has demonstrated none of the intellectual resources required to project any foundational philosophies upon which her political beliefs are based. On the contrary, she is chameleon-like and has changed her position on so many issues that the only conclusion that a reasonable observer can reach is to describe her as a political opportunist. For in accepting Biden’s offer to be his running mate, Harris is evidently willing to set aside her strongly worded campaign accusation of Biden as a racist whose anti-bussing rhetoric during the Civil Rights era impacted on her as a schoolgirl, just as she is willing to bury her belief in the veracity of the women who came forward with allegations of sexual misconduct against Biden.

Harris is clearly a ‘company man’, that is, a person dedicated to carrying out the policies dictated to her by those who control the Democratic Party and the financial interests who facilitate such control.

Indeed, Harris’s record so far as the criminal justice system is concerned, only  demonstrates her servitude to the sort of interests which ensures that a nation which composes less than 5% of the world’s population houses just under 25% of the world’s prisoners. Further, the foreign policy views which she expressed during the Democratic Primary debates indicate that she would be a willing servant of the National Security state and the endless wars it has promulgated and sustained for over two decades.

In sum, Kamala Harris’s candidature is nothing short of a disaster for her party, as well as her country which at this moment in history is desperately in need of a higher calibre of political leaders.

Posted by Adeyinka Makinde at 23:31 No comments: