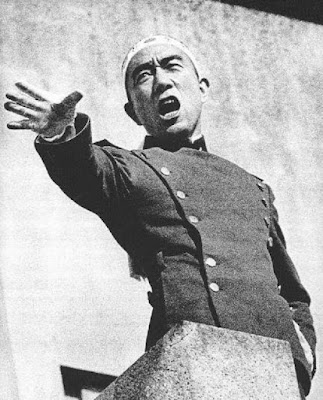 Yukio Mishima speaking to an audience of Japanese soldiers at Ichigaya Barracks Tokyo on November 25, 1970.

It is hard to imagine a more surreal scenario than one where a globally famous writer stages an abortive coup d’etat at a military barracks before committing suicide. Perhaps Wole Soyinka’s infiltrating of a Nigerian television station where at gunpoint he ordered a newscaster to stop the announcing of the results of a fraudulently contested election in the mid-1960s comes a distant second (Soyinka was later arrested and charged, but acquitted on a technicality). But by ceremonially disembowelling himself prior to being decapitated, Yukio Mishima had to many modern-thinking and Westernised Japanese seemingly turned the clock back to the Middle Ages.

His actions on November the 25th, 1970 remain incomprehensible to his countrymen.

Where some saw elements of “psychotic craziness” others could discern a carefully choreographed piece of theatre, a last act in the life of a man who was an eccentric but also a brilliant artist. He was a force of literary creativity and public controversy.

He lived in a state of perpetual contradiction.

A man imbued with a love of Japan’s rich heritage and proud of his Samurai ancestry, he was also intensely drawn to the Western world to which he often travelled and from where he relished the acclaim heaped on him. He even lived in an Italianate villa in Tokyo. He was married with two children but was apparently homosexual. And while he often projected the ambiance of a deep-thinking intellectual, he had a fascination with swords and was obsessed with bodybuilding and physical culture. As a boy he had been thin and weak, but later while living amid the trappings of upper middle class gentility, he found an outlet for a yearning to be something of a ruffian gangster, a role he played in cameo roles in films.

Mishima’s love of many things Western did not extend to wholeheartedly embracing Western notions of liberal democracy. He was decidedly right-wing and subscribed to to the ideology of Emperor worship, albeit that he alienated many Japanese monarchists when he denounced Emperor Hirohito for renouncing his claim to divinity. He memorialised what he considered to be the martyrs of the Niniroku Jiken or ‘February 26 Incident’, an abortive coup in 1936 that had been orchestrated by Imperial Japanese soldiers belonging to the Kodo-ha faction which aimed to purge what they perceived to be the corruption in the Japanese political and business classes in order to return Japan to a pre-industrialised and pre-westernised state that would be run along totalitarian lines by the Emperor with the assistance of a bakufu or military government.

Mishima merged his political thinking with his enduring thoughts of death in a short movie in which he starred in 1966 titled Yukoku (‘Patriotism’). In it, he played an army officer linked to the failed plot of February 1936 who commits seppuku.

It was something of a rehearsal of his macabre ending.

In his later years, Mishima would form a private militia he called the Tatenokai or Shield Society. It is from this group of young followers that he recruited the men who would accompany him to the Ichigaya barracks where under the pretense of paying a courtesy call to the commandant, would take him hostage and threaten to kill him unless he was allowed to give a speech to the soldiers in the main courtyard of the establishment.

The soldiers cursed him and mocked him as he enjoined them to rebel and free Japan from what he argued were the shackles of American military and cultural domination. They were, he chided, “American mercenaries” in a Japan that had “no spiritual foundation”.

It was a fruitless plea and one which most believe Mishima knew was doomed to fail. He had had a death wish, it is widely believed, since his youth when he had feigned sickness in order to avoid being drafted into the Tokubetsu Kogekitai, the air corps of the Imperial Japanese Navy, which in the latter part of the Pacific War employed a strategy of suicidal combat. The guilt of not enlisting as a Kamikaze and perishing honourably in flames haunted him all his life. Some argue that he realised that he had reached his creative peak as a writer and could see no future on earth. He had, after all, been in the running to become Japan’s first Nobel Laureate in literature before he had stepped aside to make way for his mentor Yasunari Kawabata. Others point to writing where he explicitly declared that having built a powerful-looking body, he would not yield voluntarily to the degenerative force of the natural ageing process.

In death, it is believed that he formed a lover’s pact, taking his male lover, Masakatsu Morita with him into the afterlife.

His call from the balcony at Ichigaya barracks while dressed in his military tunic, for Japan to reclaim its martial past while ostensibly attempting to rouse the Japanese military to armed rebellion was in the final analysis a ruse. It served as cover for the fulfillment of a life-long obsession with seppuku. That he believed it would offer vindication of his life and the values he propagated is clear in the words of an interview he once gave during which he differentiated between the Western and Japanese concepts of suicide: