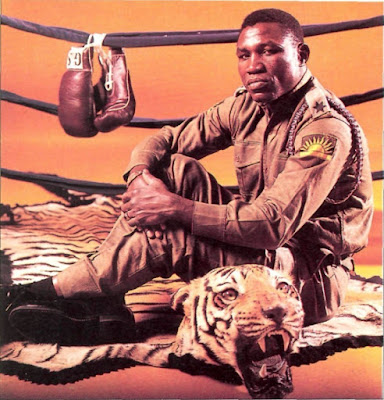 July 6th marks the 50th anniversary of the official start of the Nigerian Civil War. The roots of this war lay in the construction of Nigeria by imperial draftsmen who brought together disparate groups of ethnic and religious groups under the aegis of the British empire.

The complex origins of the conflict are often simplified by referring to a rivalry between the Hausa-Fulani and Igbo ethnic groups, and the war itself as the denouement of a concatenation of violence started by the army mutiny of January 1966, which was followed by the counter-coup of July 1966, anti-Igbo pogroms and the failure of Nigeria's leaders to reach a political settlement of the crisis through the Aburi accords of January 1967.

In the midst of this was the boxer Richard Ihetu better known by his ring cognomen Dick Tiger. Born in 1929, Tiger would become a three-time undisputed world champion in the middleweight and light heavyweight divisions. He was a hero of the newly independent Nigerian state, a status that was symbolized by the state-sponsored world title fight he had with the American middleweight Gene Fullmer in the city of Ibadan in August 1963.

Shortly after that bout, his name cropped up during a conversation between US President John F. Kennedy and the Nigerian Prime Minister, Abubaker Tafawa Balewa. Tiger had also been praised by Ghanaian Prime Minster Kwame Nkrumah for being of an embodiment of the pan-African ethos. All of this, including his award of the MBE medal by Queen Elizabeth II, confirmed that he was more than just a practitioner of the sport of boxing.

He had, in the words of the writer A.J. Liebling, often spoken of Nigeria to American sports journalists in a distinctly "chamber of commerce tone". But with the secession of the Eastern region of Nigeria, Tiger, an ethnic Igbo, renounced all his affiliations with Nigeria, and pledged support for the Igbo-dominated Republic of Biafra.

The "chamber of commerce" tone would be replaced by one that was often bitter and regretful as he embraced the role of propagandist in the cause of the rebel state. He proceeded to issue successive denunciations of Nigeria, to speak up for Biafra, and to raise monies for the cause of separation, as well as what later developed into an acute humanitarian crisis.

In December 1967, he received a direct commission as a Lieutenant into the Propaganda Corps of the Biafran Army. It was an act which made an impression from afar. Jerry Rawlings, the former military head of state of Ghana who later became that country's president, once claimed that as a young man he only realised the enormity of the Nigerian-Biafran civil conflict when Dick Tiger enlisted into the Biafran Army.

There was something of a tug of war for the allegiance of Tiger during the period of crisis before the onset of war, as well as in the early stages of the ensuing conflict. His world light heavyweight title bouts against the Puerto Rican Jose Torres respectively in December 1966 and May 1967, were accompanied by telegrams of support and congratulations from Colonel Yakubu Gowon, the Northerner who became Nigeria's military ruler after the counter-coup of July 1966 and Colonel Odumegwu Ojukwu, the military governor of the Eastern region who would lead the rebellion.

As Tiger prepared to face Bob Foster in defence of his light heavyweight title in May of 1968, he reacted with astonishment at the Nigerian media's habitual reference to him as "Dick Tiger of Nigeria". His accusations of indiscriminate killings committed by Nigeria's armed forces during interviews with news outlets such as the New York Times, his playing of the Biafran anthem at his fights in America, and his distributing of anti-Nigerian propaganda outside Madison Square Garden put paid to any hopes the Nigerians had of keeping him on side.

Tiger did not stop at criticizing the Nigerian military government for genocide and the commission of war crimes: he dug deep into his pockets. For instance, in 1967 when the Nigerian-turned-Biafran politician K.O. Mbadiwe went to the United States to raise monies for the Biafran effort, Tiger contributed $1,000 to a fund that was to be made available to the Biafran government.

The Biafran enterprise would, however, end in disaster.

A swift encirclement and the institution of a blockade resulted in widespread starvation and the steady diminution of its original territory. Ojukwu fled and Biafra eventually capitulated in January of 1970. Anticipating the end, Tiger handed back his MBE medal to the British embassy in America citing in an accompanying note Britain’s moral and military support for Nigeria in its “genocidal war against the people of Biafra.”

While Gowon sought to implement a policy of national reconciliation, members of the ruling military regime remained unforgiving about Tiger's role during the conflict. His words in a ringside interview conducted after his loss to Emile Griffith in July of 1970 were positive, but were an attempt to mask his overwhelming disappointment at the turn of events, and his uncertainty about reabsorption. When asked by Don Donphy about his plans for the future, Tiger responded:

"You know about the war in my country? I am so happy that we are one now, one Nigeria again. And maybe in a few years -a couple of months- I can go back and see my people."

His mid-sentence change from "years" into "months" hinted at the true state of his predicament. He remained in exile until the onset of liver cancer prompted him to seek assurances from the Nigerian authorities through the offices of their representative in New York that he would be allowed to return without molestation.

His plea, witnessed by the sports writer Larry Merchant, was granted and he left New York for Nigeria in July 1971, dying six months later at the age of 42.

Adeyinka Makinde is the author of DICK TIGER: The Life and Times of a Boxing Immortal and JERSEY BOY: The Life and Mob Slaying of Frankie DePaula. He is also a contributor to the forthcoming Companion to Boxing to be published by Cambridge University Press.

Posted by Adeyinka Makinde at 10:25