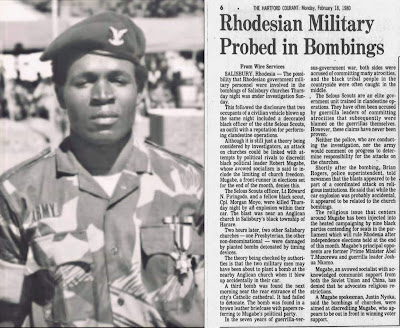 Lt. Edward Piringondo, a decorated member of the Selous Scouts (left), and clipping of the Monday, February 18th edition of the Hartford Courant

Robert Mugabe: Why are your men trying to kill me?

Lt. General Peter Walls: If they were my men you would be dead.

- Exchange between Mugabe, leader of the ZANU-PF political party and Walls, the head of the Rhodesian Armed Forces on March 17th, 1980.

The build up to the first universal elections in the history of Rhodesia, the country which after the elections would be reconstituted as Zimbabwe, was a tumultuous period. After the failure of internal settlement, the negotiations and hard bartering at the Lancaster House Conference, had, it was hoped, finally set the country onto the path of peace and national reconciliation. But tensions remained high during the campaign period. There were rumours of a coup by the Rhodesian Army should Robert Mugabe win and a pledge by some White soldiers to continue the fight along the lines that the French O.A.S. had embarked once Algeria was lost. The Black political parties of ZANU and ZIPRA were accused of intimidating Black voters, and Mugabe threatened a civil war if he was disqualified by Lord Soames, the British Governor-General. Mugabe himself had survived two assassination attempts in Fort Victoria and Salisbury. The campaign was punctuated by episodes of violence, one of which involved the commission of a ‘False Flag’ operation by the Selous Scouts Special Forces unit.

On the night of Thursday, February 14th, 1980, the Black township of Harare was rocked by an explosion in a Renault 12TL Sedan parked near St. Mary’s Anglican Church. The occupants, two young Black men, were blown apart and the vehicle disintegrated. The Salisbury Herald reported that an assistant priest at the church, Reverend David Manyau collected the human remains scattered over the area and buried them at a nearby spot.

Then a few hours later, two bombs exploded. One was at a Presbyterian church and the other at a non-denominational church. Another set of incendiaries would be found the following morning near the entrance of the city’s Catholic cathedral. Inside a leather briefcase were a time-bomb comprising 2.7 kg of TNT and a Chinese mortar bomb. The Herald reported that a slogan “Pambere neMugabe!” was written in the briefcase among literature referring to ZANU-PF (Zimbabwe African National Union – Patriotic Front), the political party led by Robert Mugabe.

Residents of Salisbury, the capital city soon to be renamed after the township, woke up to read an advertisement in the local paper which warned that Mugabe would close all churches if he was elected.

There was a link between the explosions and the advert. The bombs which damaged the Presbyterian church and the non-denominational one had been set by a timer, as police would discover, by the now deceased occupants of the bomb-wrecked Renault. The advert also appeared to have been timed to coincide with the previous night's explosions, just as the undetonated bomb-in-a-brief case near the Catholic church had been designed not to explode to implicate a political party because of the literature contained inside of it.

But instead of implicating the party led by the Jesuit Marxist Mugabe, the circumstances only served to deflect suspicion from ZANU to the security forces. This included the clumsy choice of words used in the slogan found in the unexploded briefcase. The guerrillas and other Africans did not use such wording, inviting the reasoning that it had been composed by a European.

Police and agents of ZANU-PF were quick to put together the pieces of the jigsaw once the identities of the men who were blown up in the car were discovered. This was only made possible because Mugabe had pressured the military command to reveal them after agents working for him had traced the car registration to one of the dead men.

They were Lieutenant Edward Piringondo and Corporal Morgan Moyo, both members of the Selous Scouts, a Special Forces unit of the Rhodesian Security Forces, which had gained a reputation as the most effective fighting outfit against the Black African guerrillas during the 2nd Chimurenga or ‘Bush War’.

In a surprise communique issued on Saturday, February 16th by Rhodesian Combined Operations Command on, it was admitted that Piringondo and Moyo were in the privately-owned Renault. It claimed that both men had contacted their duty officer an hour before the fatal explosion to report that they had information about the presence of “terrorists”. They were told to investigate and report back. However, the communique did not explain why the soldiers should have been transporting explosives in a private vehicle. When pressed, Combined Operations refused to give further details. This appeared to onlookers to be an unconvincing attempt at effecting what in intelligence circles is referred to as plausible deniability.

Formed in 1973 as a tracking unit, the Scouts quickly germinated into a multi-racial outfit tasked with waging unconventional warfare. Its members employed infiltration, abduction, torture, sabotage and blackmail. Many of the missions they undertook relied on deception, and such deception was used to either kill a large number of the insurgent enemy or to kill specific civilian targets in order to blame the Black African insurgents. They were also a key component in the waging by the White minority government of chemical warfare against their Black opponents.

Lt. Piringondo, an early African recruit, was a 27-year-old veteran of ‘pseudo-operations’, many of which involved infiltrating guerrilla bases. One such mission was carried out in November 1979 prior to ‘Operation Murex’, an attack on a ZIPRA brigade in the Kabanga Mission area of southern Zambia.

For this and other audacious assignments, Piringondo had won the Rhodesian Silver Cross (SRC), the country’s second-highest military decoration for conspicuous gallantry. He had also been posthumously nominated for the Grand Cross of Valour which, had the Scouts not been disbanded, would have made him Rhodesia’s most decorated soldier.

Piringondo was thus the sort of man on which the Scouts could call upon to perform a mission which was designed to implicate the military wing of Mugabe’s Marxist-orientated party and paint Mugabe as anti-religion and anti-religious freedom.

But it was a mission too far for Piringondo and his accomplice in arms, Moyo, both of whom Mugabe would state with some relish had been “caught and destroyed in their devilish trap”.

Adeyinka Makinde is a writer based in London. He has a keen interest in history and geopolitics.

Posted by Adeyinka Makinde at 23:21 No comments: