Ejiro A. Eghagha's Still on the Matter: An Anthology of Short Fiction Stories for Africans in the Diaspora 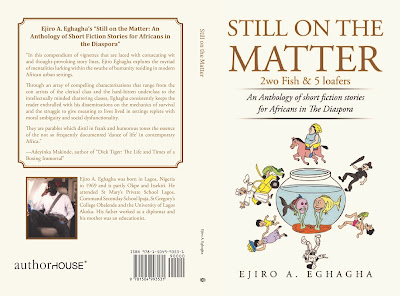 'Still on the Matter' is a collection of fiction writings spanning 25 years. What started out as a playful writing passion evolved into stories of life events from police brutality, religious diversity, corruption and government etc. The stories comically question African development based on ignorance and colonial mentality and ask the reader to relate with characters and situations in them. The book is dedicated to my siblings who have always been supportive of my writing and passion for cinema, especially Alero. My travels in Europe and West Africa early in life exposed me to a multi-faceted cultural world and I hope I have captured this in my writing style. Certain characters appear in more than one story even though the stories are not directly related and it is my way of creating a complete story book of different stories with similar underlying tones that can be related with by Africans in The Diaspora especially.

In this compendium of vignettes that are laced with coruscating wit and thought-provoking story lines, Ejiro Eghagha explores the myriad of mentalities lurking within the swathe of humanity residing in modern African settings.

Through an array of compelling characterizations that range from the con artists of the clerical class and the hard-bitten underclass to the intellectually minded chattering classes, Eghagha consistently keeps the reader enthralled with his disseminations on the mechanics of survival and the struggle to give meaning to lives lived in settings replete with moral ambiguity and social dysfunctionality.

They are parables which distill in frank and humorous tones the essence of the not so frequently documented 'dance of life' in contemporary Africa.

- Adeyinka Makinde, author of "Dick Tiger: The Life and Times of a Boxing Immortal"

Ejiro A. Eghagha was born in Lagos, Nigeria in 1969 and is partly Okpe and Itsekiri. He attended St. Mary's Private School Lagos, Command Secondary School Ipaja, St. Gregory's College Obalende and the University of Lagos Akoka. His father worked as a diplomat and his mother was an educationist.

Hezbollah and the Dilemma of the Syrian Civil War 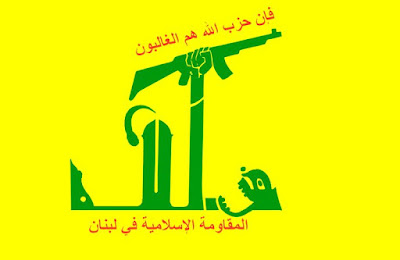 
The recent killing in Damascus of Mustafa Badreddine who was Hezbollah's top military chief served to raise several key issues. The most obvious related to the circumstances of his death and with whom responsibility for the homicide lay. Initial reports that it had been a targeted assassination carried out by Israel appear to have been laid to rest by a statement issued by the organisation which related that Badreddine was killed by artillery fire emanating from a Sunni militia fighting the Syrian Army to which Hezbollah is aligned in that nation's ongoing civil war.
However, one consistent theme raised in the reports by news outlets was the assertion that Hezbollah's popularity within the Arab world -at its highest in the aftermath of the Israeli invasion of Lebanon in 2006- has plummeted in recent times. This ebb is even said to extend  to its Shia base in Lebanon.
In many ways this is surprising given the high level of praise heaped on the Russia Federation by large swathes of global opinion in taking on Sunni Islamist militias including the so-called Islamic State. At the same time, the group's involvement in the Syrian conflict has been controversial from the start given the multi-confessional make up of Lebanon and the dangers of the Syrian conflict spreading there. Yet, whatever the misgivings, it is difficult to see how its leadership could countenance the thought of effecting a complete or partial disengagement from Syria given what the organisation believes is an existential struggle to preserve its position of regional influence and ultimately the preservation of peace in Lebanon.
Any graph charting the rises and dips in the popularity of Hezbollah, or 'Party of God', would indicate that it reached its summit in the time following the militia's repelling of the Israeli Defence Force's incursion into Lebanon back in 2006.


That victory, which followed its leading role in resisting many years of Israeli occupation of southern Lebanon, consolidated its reputation as a formidable military body. It remains unique in the contemporary Arab world as the only martial entity having both the willingness and the capability of taking on Israel.


Hezbollah's success in 2006 stands in sharp contrast to the timidity of Arab states in confronting Israel. For instance, the Saudi-led Arab League gave assurances to Israel that none of its member states would intervene against the IDF's destructive invasion of Lebanon in 1982 when Prime Minister Menachem Begin and defence minister Ariel Sharon were on a mission to physically annihilate the Palestinian Liberation Organisation.


It was that bloody intervention which actually created the basis for the rise of Hezbollah.


Hezbollah is aware that the Syrian conflict was deliberately started by the United States and its NATO allies. The revelations by Roland Dumas, a former French foreign minister, in 2013 clearly identify the root of this policy as lying in the aim of consolidating the regional dominance of the state of Israel.


Largely funded by Saudi Arabia and the Gulf emirates, it is an operation which has involved importing Sunni extremist militias such as the al-Qaeda-affiliated Jabhat al-Nusra and what later morphed into the Islamic State. The intended result, that of the fall of the government of Syria, is one which Hezbollah, allied with both Damascus and Tehran in what is often referred to as 'The Shia Crescent', cannot tolerate.


In early 2015, retired United States General Wesley Clark made the following admission in an interview on CNN:


ISIS got started through funding by our friends and allies because as people will tell you in the the region, if you want somebody who will fight to the death against Hezbollah, you don't put out a recruiting poster saying, 'Sign up for us, we're going to make a better world.' You go after zealots and you go after religious fundamentalists. That's who fights Hezbollah.


That Hezbollah itself was specifically targeted for destruction cannot be doubted. Prior to the war in Syria, the United States had during the second term of the administration of George W. Bush, re-configured its foreign policy priorities to aid pro-Saudi Sunni militant groups in the Lebanon in operations against Hezbollah.


In fact, General Clark had mentioned in an earlier CNN opinion piece published in August of 2014 that "while (ISIS) has challenged al-Assad's forces in Syria, it is more focused on carving out its territory in northern Syria (and) destabilizing Lebanon."


It was clear to Hezbollah that if Syria fell to Sunni extremists that such groups would next foment trouble in Lebanon; a nation that was wracked by a devastating civil war in the 1970s and 1980s.


While it is true that Hezbollah do effectively function as a state within a state, it would be remiss not report that the group acknowledges that it would be futile to attempt to dominate Lebanon. It is on record as stating its support for the idea of Lebanon existing as a secular state in which the political and cultural rights of Sunni, Shia, Christian, Druze and others are guaranteed.


The need for peaceful co-existence is of primary concern for the Lebanese who for decades have suffered the effects of deliberate 'divide and conquer' policies followed by Lebanon's French colonial rulers and then by Zionist Israel. Indeed, Moshe Dayan is recorded in the diaries of Moshe Sharett, an early Israeli prime minister, as declaring that Israel needed a Christian military officer to declare a Christian state out of which the region south of the River Litani would be ceded to Israel.


It was the policy of David Ben Gurion to foment sectarian trouble among Lebanese groups with the aim not only of forestalling the development of a unified Arab nation which could threaten it, but also of creating the circumstances in which land could be acquired. Dayan's plan of course came to fruition with the creation of a surrogate militia, the South Lebanon Army,  which did the bidding of Israel in its battles with the PLO and other sources of resistance.


The emergence of Hezbollah during the Israeli occupation was portrayed in the Western media as that of a uniquely ruthless, fanatical and well-indoctrinated fighting force. The slaughter of American and French peacekeeping troops by suicide bombers in 1983 is still seen as the result of a combined operation of Iran, Syria and Hezbollah. Another bombing earlier that year at the American embassy although claimed by an obscure pro-Iranian group is also believed in Western intelligence circles to have been carried out by Hezbollah. In more recent times, blame for the assassination of Lebanese Prime Minister, Rafic Hariri, in 2005, has also been affixed on Hezbollah.


The group continues to deny responsibility in these incidents.


Amid claims of its waning popularity is evidence of an appreciation of Hezbollah's efforts in helping to shore up the secular government of Bashar al Assad among the Lebanese Christian population. A survey carried out by the Beirut Centre for Research and Information in 2014 revealed that two thirds of Lebanese Christians believe that Hezbollah is protecting Lebanon from what are termed Takfiris; that is, extremist Sunni groups.


Further, there have been reports of Lebanese Christian communities who have seen the suffering of Christians at the hands of Sunni extremists in Iraq and Syria, turning to Hezbollah for help. The Christian dominated northern Lebanese town of Ras Baalbeck is a case in point. Thus, for many Christians, it is no overstatement to view Hezbollah's actions in Syria as serving to protect Christians in the Middle East.


Hezbollah's loss of popularity in regard to the wider Arab Muslim world may not be unrelated to anti-Shia prejudices held by ordinary Sunni Muslims who of course represent the dominant group within global Islam. Yet, if the average person on Arab street is concerned about those of their leaders who are bribed by the United States and are otherwise intimidated by the military might of Israel, it is clear that the leaders of Hezbollah do not fall into that bracket.


It is easy to understand the ambivalence of members of the Lebanese Shia community about sending their young men to fight and die outside of Lebanon. But it is only natural that the average person who is mourning the loss of kinsmen or fearful for the lives of those on active duty is not inclined to think strategically.


And while much of the world has enthusiastically applauded the apparent success of the intervention of the Russian Federation which has rolled back the Islamic State, it is worth reminding that this would not have been possible without the aid of Hezbollah.


They are in it not for the popularity stakes but for the long-haul.

"A Night To Remember But.." The Story Behind Dick Tiger Versus Gene Fullmer, Black Africa's First World Boxing Championship Bout. 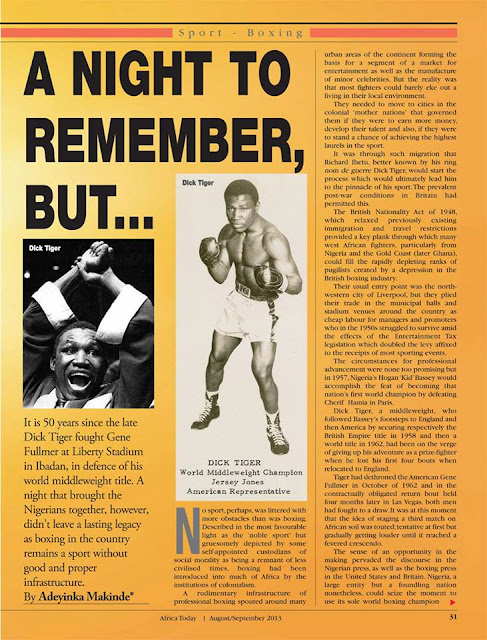 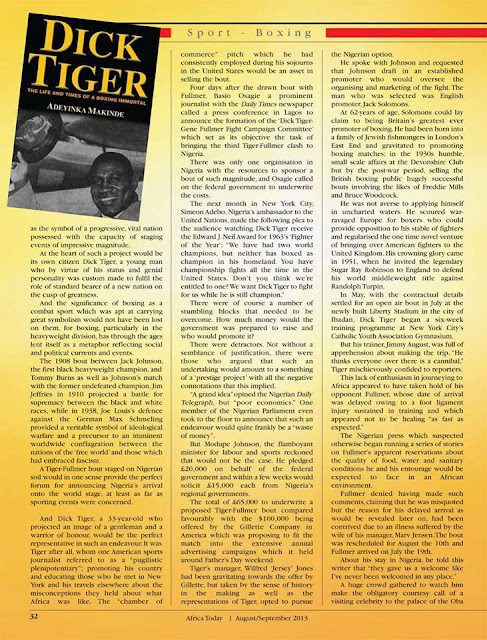 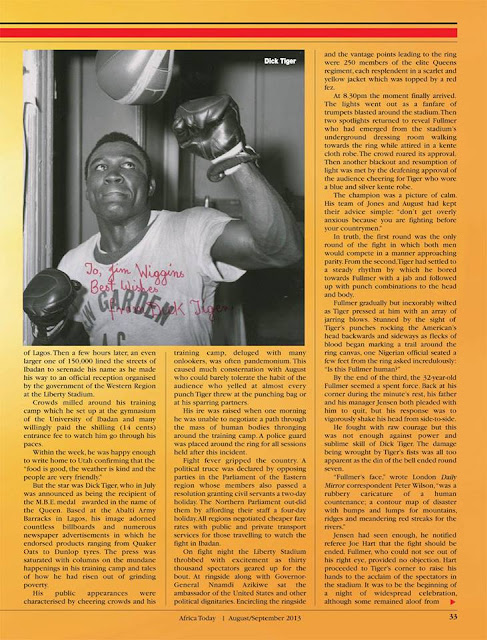 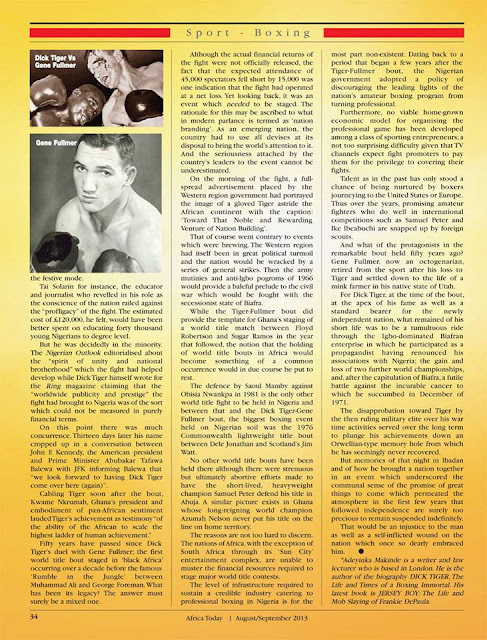 Posted by Adeyinka Makinde at 21:42 No comments: