Book Review Of Adeyinka Makinde's DICK TIGER: The Life and Times of a Boxing Immortal by Aram Alkhazoff 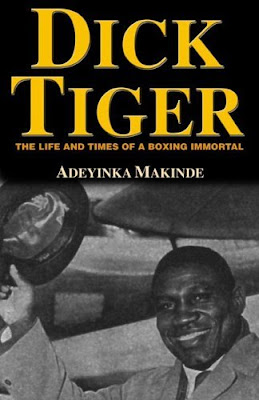 This is a book review that is going to be a labor of love. In the first place, it is about an athlete who was a champion boxer, the great middleweight champion of my youth, Dick Tiger, the Igbo from Nigeria.


Boxing, along with history and gifted story-telling and writing are my passions in life. This intense tale that Makinde has written has all three elements. In fact, this may be one of the most intense biographies of any athlete who ever lived.


As you know in this age of mass communications, there are thousands of biographies of athletes. They are a dime a dozen, and most of them feature selfish attitudes and lifestyles that are an embarrassment to people of profound thoughts and sense of true manhood. You, I’m sure have seen the modern athlete with his multi-million dollar, spendthrift, womanizing, video gaming extravagant childish lifestyles. Of course, this is a spoiled age.


It’s the “Me First” generation. No young man will grow an inch taller in character reading anything about them. But if you read “Dick Tiger” and learn further about this great boxer, you will grow in admiration about the manhood, character, loyalty, devotion that truly was the man; for Richard Ihetu, his real name, in the words of the great boxing writer Ted Carroll, was “that rare individual whose abilities in his chosen profession matched his abilities as a man.”


Strong words; but any fan who viewed Dick Tiger’s actions not only as a sportsman but as a man, knows that he earned this tribute.


Sure Dick Tiger was a boxer; a great middleweight and light heavyweight boxer. He won world championships in   two divisions back in the day when each division had only one champion.


He has a great story, as he came from proud poverty in Africa, armed with the strong Igbo culture of determination to improve; started boxing in the lowest, poorest circles; moved to England to seek a career in the sport, and then on to British Empire Championships.


It is a great boxing story that the author describes in the book and it is full of the rise from rags-to-riches that poor boys often experience in the boxing game. For the boxing fan, this is a great treasure of reading.


As Biafra suffered and died in a storm of revengeful genocide as the world shamelessly watched, so did Dick Tiger suffer in silence and with a proud face and a heart that couldn’t understand why the Western world never understood the dream of independence of his people, watched his once powerful body break down and finally perish. As the world was shocked to see the carnage in Biafra, so it was shocked to hear of the early death of this proud Igbo.


Dick Tiger lived the dream of Biafran independence and never wavered. He risked his name, his material holdings, and his life. He kept fighting down to the last and when the Biafran dream was shattered, Tiger, like his people, peacefully put down his dream and his will in order to stop the slaughter of innocents.


Dick Tiger loved his country and even though he loved and lost; this proud man retained great nobility. The author of this book tells this story with sensitivity and research. Few men of fame have so honestly become one with a losing cause, yet represent the cause with so much honor that no one believing or disbelieving in the cause can cast a stone at him.


Of course Dick tiger was a great boxer and this book of course goes into depth about the obscurity of about the championship career of the man from beginning to end. From his beginnings in Nigeria; boxing in obscurity, to his struggle to become recognised in England; to his championship triumphs in America before the whole sporting world.


Another important boxing component found in this book, and to my knowledge no told in any other book about Tiger, is the story of his difficult rise to the title, from boxing in the poor arenas in his native Africa, to his move to England to find new mountains to move and on to the United States and fame in the ring.


Makinde has masterly opened up the world of the struggling boxer from the ‘Third World’ and his quest and dream of money in the prize ring and the problems he faces.


This is a story that is rarely told and any boxing fan will enjoy it; for a fighter from a nation like Nigeria to come to England and succeed faced many a fence to climb., and for Tiger to do so and earn the respect for not only his boxing ability and his proud character from western fans, is a story in itself.


Again, Makinde captures this difficult tale to tell and opens up Dick Tiger’s stoic  personality to the reader and explains the bright light of the inner man.


Of course you can find boxing commentary about Dick Tiger in many boxing books. What makes this book so important and why one should read it, transcends mere boxing and athletics.


We here in the West for the most part saw the pictures of the genocide in Biafra. We saw the starving children and many went into their pockets to try to help. But few people when put to the question really know what happened in Nigeria to the Biafran dream and what it was all about.


I feel this is the tragedy of history and maybe a tragedy for all of mankind. The dream of independence of these talented proud people, the crushing defeat, the callous insensitivity of the great powers, the genocide, the silent return of a defeated people to the old order, need to be learned by those who study and decide the fates of our human race. Too little is known about this page of history and that’s what makes this book important.


Two more points about this book. First of all, the author, Adeyinka Makinde, had the intelligence in a boxing sense to pick Mr. Ron Lipton to write a very worthy “introduction” to the story. Lipton is one of the world’s finest boxing referees and historians, but more than that, he is probably the world’s most informative expert of the New York boxing scene of the late fifties and the sixties.


Lipton saw all of the fights, watched all of the great fighters train, and was a sparring partner for many of them including Dick Tiger. He was enough of a warrior poet to see the real depth of Dick Tiger and appreciate him for who he really was as a fighter and a man.


Secondly, Makinde truly captures something about Dick Tiger that was so evident and so markedly different about him and what made him so popular here in the states with the gritty, hardened boxing fans of that New York era: his extreme, humble sportsmanship.


Anyone who saw Dick Tiger fight, in my case, as a teenager on television, observed a sportsmanship and respect for his opponent and the match itself that shined like the blazing sun.


Anybody who saw the man fight commented upon it. Like the great French fighter, Marcel Cerdan, another great middleweight champion who met a tragic end, all he wanted was to meet his opponent head on and have a fair punch out.


When that was over, he had a smile and a pat on the back for his opponent and he accepted the outcome like a true sportsman. That stuck out most in Dick Tiger as a boxer to me, and our author brings that out in the book and gives us a reading on the Tiger acceptance of fair play in the ring and in life that ultimately disappointed him.


In reading about the life of Dick Tiger; born Richard Ihetu, his rise and fall; you will also read about the tragedy of Biafra and its rise and tragic fall. Few men embody a people. Dick Tiger did and that’s why this is no mere sports book.


It’s a book about modern Africa, and it educates and opens the door to research on that dark page in history. In the West, the struggle for the independence of Biafra was not understood nor supported, and more suppressed actually.


It was this injustice that broke the heart of Tiger in a way that no other obstacle in life could. This book starts an education that one can follow up on. More so, it’s a human story about the human condition and a man who was much more “human” than almost any man you might see in the spotlight.


The masculine, noble countenance of Dick Tiger was visible to the men who met him and understood those values, and kudos to the author Adeyinka Makinde for capturing this in this well-written book about Africa’s greatest boxing hero.