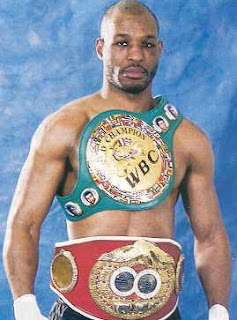 Right from the time of its making, the Bernard Hopkins-Felix Trinidad match up promised the victor a reward which would transcend the 'secondary issues' of multi-belt holder and financial remuneration.


The writing and talking both between and within the lines pointed to a coronation of sorts; the anointing and appointing of the 'one left standing' as a bona fide great of the contemporary game and most likely a place among the standouts of the different eras.


Indeed, the creation of the Sugar Ray Robinson Trophy in honour of the man many critics rank as the interdivisional champion of all time, or colloquially, as pound-for-pound, the most complete boxer, set the conditions for what Messrs. Trinidad and Hopkins were fighting for: an elevation to boxing immortality.


And now that Hopkins has sailed through his test with almost embarrassing ease, will he be elevated to the rarefied heights of pugilistic Valhalla? Or will the fans and pundits renege on this sense of promise, steadily built up in the pre-fight promotion?


I pose this question because I feel uneasy about the manner in which history has favoured certain fighters and has correspondingly made it difficult for others when ascertaining who will be remembered as a great fighter.


Consider the rivalry between the recently departed Sandy Saddler and Willie Pep. Saddler beat Pep in three meetings out of four, yet when a list of the greatest featherweights is produced, one tends to locate the name of Saddler behind that of Pep.


My point is that the Hopkins-Trinidad bout appeared more to be about establishing Trinidad's credentials as a 'great' than it was about Hopkins assuming this mantle. Trinidad with his unbeaten record, win over the glamorous figure of Oscar De La Hoya, and his success across the divisions was the betting favourite and negotiated a pecuniary deal far in excess of what Hopkins was earning.


Hopkins on the other hand possessed a solid but unspectacular record sullied by a loss to Roy Jones. There are some fighters who have a certain style and an aura; aspects of which are undefinable as to be bordering on the esoteric.


They are 'more attractive' than their contemporaries and because of this are more susceptible at gaining recognition than those who in fact are their equals and in some circumstances, their betters.


Willie Pep at his peak had a style that bordered on the ethereal, a swiftly moving master of scientific boxing who arched his blows and evaded his opponents punches with consummate ease and with seemingly effortless artistry.


The style of Sandy Saddler, now of blessed memory, was as far off from the Pep school of 'Fancy Dan' boxing as chalk is different from cheese. But his robustly direct and ruggedly aggressive modus was as efficient as and infinitely more destructive than Pep's ever was. I would submit that Saddler would have beaten Pep three times out of four at any stage of their careers.


So far as Robinson and Basilio are concerned, I have no reason to break ranks with the notion that as a fighter, he was Basilio's superior, as indeed I have few grounds to deviate from popular estimates that he is the greatest fighter of all time. Yet, all Basilio remembers is that he stood in there with Robinson for thirty rounds and did not embarrass himself.


In the aftermath of the fight, the two questions which need to be posed are whether Hopkins has indeed ascended to greatness and also whether Felix Trinidad can regain enough credibility in the future to be ranked as a great.


Fighting greatness encompasses the tried and tested criteria of overall ability and durability: punching power, ability to take a punch, stamina, adaptability, guile and so on. Hopkins has consistently though unspectacularly displayed the full range of these traits and most impressively has demonstrated an adeptness at merging the physical as well as psychological dimensions of his craft to pull out a famous victory.


He didn't simply go in and knock Trinidad over because he had the advantage of being the 'natural' middleweight; he actually out-thought and out-manoeuvred a man who it was felt had a better boxing brain.


His blustering performances at the pre-fight conferences in both words and actions; parts of which were considered to be in poor taste, are likely in hindsight to be seen as skilfully crafted ploys aimed at bolstering his confidence and wounding Trinidad's psychological equilibrium.


He was uncompromising in his methodology of focusing his professional ire at Trinidad by sporting apparel bearing the word 'WAR' even at the risk of the disapproval of many of his countrymen given recent events.


Does Hopkins deserve the tag of great fighter? Well, if you beat what is put before you in your career, it would appear to be a valid appellation. Should his achievement be played down because some will now claim that Trinidad was merely an overblown welterweight? Of course not. Marvin Hagler's fighting credentials went up with victories over the likes of Tommy Hearns, Roberto Duran and a peak form John Mugabi.


On the other hand, will Trinidad's loss irreparably damage his quest for greatness? Not necessarily. Fighters like Henry Armstrong and Sugar Ray Robinson failed during excursions to heavier divisions though admittedly, Armstrong's draw with Ceferino Garcia and Robinson’s loss to Joey Maxim bear little similarity to Trinidad's situation.
For while Armstrong did not succeed on a technicality and Robinson's loss was due more to a New York City heatwave rather than to Maxim’s punches, Trinidad was comprehensively outboxed and then stopped.


Nevertheless, a return to the lower divisions to tackle the likes of Sugar Shane Mosely and Oscar De La Hoya and beating them would be a route to attaining this status. Before that comes about however, he will be in need of a lengthy rest to heal the physical and spiritual wounds inflicted by Hopkins.


It is of course with Hopkins we must end. He has overcome the crippling early circumstances of criminality. He reconstituted and revived himself after losing to Roy Jones to become the dominant middleweight of the late nineties. He has upset odds that figured him to be Trinidad's inferior.

Posted by Adeyinka Makinde at 23:20