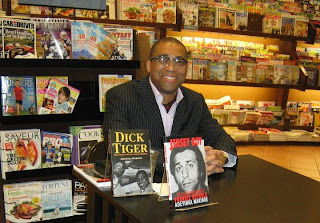 Book Ade Makinde and he will enthrall your listeners with a tale which is already capturing the imagination of Hollywood producers; one possessing the raw components of Rocky meets Raging Bull on the Mean Streets of Jersey City.

The story of hard punching Frankie DePaula, one of the American Dream gone awry, is a true-life cocktail of corruption, betrayal, hubris and murder set against the backdrop of the sport of boxing and the world of the Mafia in the 1960s.

It is a gritty retelling  of the world epitomised by the ‘Soprano State’ culture bedevilling contemporary New Jersey; a world inhabited by a charismatic but flawed figure who was close friends with both Frankie Valli and Joe Namath, and counted Frank Sinatra among his fans.

Part historical chronicle and part expose, it is a story that will shock as well as inform and entertain listeners.

CREDENTIALS: Adeyinka Makinde trained as a barrister and is a lecturer in law. Based in England, he has served as a programme consultant and provided expert commentary for  BBC World Service Radio. He wrote the well-reviewed biography, Dick Tiger: The Life and Times of a Boxing Immortal, which was published in 2005.
AVAILABILITY: Nationwide by telephone & New York City by arrangement
CONTACT: Jed Dimatteo, Ade's US Representative (201-309-0021) and thelawacademy@aol.com
Posted by Adeyinka Makinde at 13:13