Book Review: One Ring Circus – Dispatches from the World of Boxing 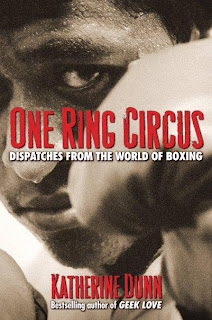 The attraction of the sport of boxing to men and a good fewer women involved in the vocation of constructing words is well documented. Charles Dickens, Ernest Hemingway and Norman Mailer but to name a few had a great affinity to it and featured the game in their novels and in other writings. This attraction is not too hard to fathom. For in boxing lies an aggregate of the dramas of life.


From the politics of matchmaking to the rituals associated with the dressing room. From the protocols within the training gymnasium to the drama of the action in the ring, it is a sport which consistently fascinates. In the ring, two beings set at each other with flailing fists to put each one’s skill and stamina to the test.


Within the confines of the ropes is played out an uneasy accommodation between the use of specially designed rules and a resort back to the barbaric origins of humanity: the raison d’etre of two well-conditioned specimens is to hurt the other, and, if possible, to knock the opponent into a state of unconsciousness.


It serves as a spectacle which is at once compelling and disconcerting. Two modern gladiators, exhibiting a supremely taxing form of athleticism, tread on a canvas partly as artists and partly as adrenaline-fuelled agents of destruction. In the background, a crowd, or at least, a significant portion of the crowd will bay for human blood.


In each fighter is an individual’s story about the rationale for picking up the gloves. This frequently involves notions of using the sport as a pathway to redemption, of self realisation and of allowing a member of society’s underclass of nobodies a means to some form of personal actualisation.


One reason for steering youth to this sport was the argument that the disciplines it imposed on the impressionable mind were character building. Yet, the boxing business is frequently charged with inflicting soul destroying experiences on its practitioners as well as leaving them physically disabled. It is a sport which is ever controversial.


One which boasts of extraordinary characters such as John L. Sullivan and Muhammad Ali, who have risen to the peaks of fame –and of infamy.


The monies generated by various fights have set all sorts of records but at its lowest level in the professional ranks, it has often vied for the position of most difficult and least rewarding of trades.


‘Dispatches From the World of Boxing’ is a particularly apt sub-title. For boxing is somewhat analogous to a war zone. There are the generalissimos: the rival big-time promoters and the venerated and at times cantankerous calling-the-shots superstar fighters.


Then there are the ‘foot soldiers’ whose ranks include many an unsung cutman and the $200-dollar-per-round preliminary fighters.


The ‘casualties’ comprise at any given moment an assortment of ageing and deluded former champions, contenders and journeymen; each one overstaying his welcome and fighting a usually losing battle against one immutable tenet of nature; the inevitability of physical degeneration.


So too, the brain-damaged and indigent ex-pug struggling to pay for the medicines and the treatment that may arrest his degenerating health along with the other bills of life and even, one could argue, the adherents: today’s fan; members of a fast-shrinking constituency who more often than not feel cheated by a several decades long habit of fractious titles, non-competitive fight bills as well as the enormous dues demanded by pay-per-view shows.


Culled from extensive writings for The Oregonian and Willamette Week and from prestige assignments for Playboy, Sports Illustrated and Vogue, ‘One Ring Circus’ is a collection of engaging essays and articles written by Katherine Dunn, an award-winning novelist and boxing enthusiast who has covered the sport for three decades.


A 1994 article penned for Mother Jones and entitled “Just As Fierce” is a well-argued polemic urging all: feminists, traditionalists and other ideological positions in-between to acknowledge the frequently ignored feminine instinct and capacity for aggression and to get used to the idea of female combatants duking it out in the squared ring.


Laced with references to personal observations, to historical, sociological and psychological surveys, she posits the compelling conclusion that the female species is as widely varied as is the male when it comes to displaying ‘fighting heart’: A ‘heresy’ postulated as an inexorable logic.


She is at her prosecutorial best when indicting the denizens of the media for their widespread, one-dimensional, open and shut denunciations of Mike Tyson in the aftermath of the ear-biting incident during his second contest with Evander Holyfield. It all bore more than a whiff of double-standards and racial profiling according to Dunn.


One thing Dunn has in common with the many talented writers who have devoted much time to boxing is her seemingly endless reservoir of enthusiasm about the game and the characters that are associated with it.


With Alexis Arguello, the Nicaraguan legend, she celebrates a dignified paragon of pugilistic elegance and human rectitude. In Francisco Roche, a Cuban emigre with a ‘past’, we see Dunn shine a spotlight on an averagely-talented fighter trying his best to achieve his version of the ‘American Dream’.


Also covered is Lucia Rijker, a Dutch warrior of resolute determination, in whose tale is a confirmation of the truism that discipline married to talent produces professional excellence. Then there is the enthrallingly dark and tangled narrative that is the story of Johnny Tapia.


While boxing may be a sport many of its fans have been in love with all their lives, it is a love affair which nonetheless is often times uneasy; even bitter-sweet. It is tempered when the inevitable fatal or near fatal ring casualty hits the news.


And just as in the 1960s, when the death of the Cuban welterweight Benny ‘Kid’ Paret touched off the opprobrium of the anti-boxing brigade, so in the 1980s, the death of Duk Koo Kim, a Korean lightweight, re-ignited, so far as the United States was concerned, renewed efforts to do away with a sport whose enemies feel has no place in a civilised society.


Once again, Dunn, as other boxing journalists, was called upon to dip her pen into the inkwell to offer her ruminations and sober assessments of the sport she loves.


As a writer situated in the epochal 1980s, she was well-placed to record the violent theatre that was Marvin Hagler versus Thomas Hearns, the racial politics and personal aspects involved in Larry Holmes’s defence of his world heavyweight title against Gerry Cooney, as well as the exhilarating success-against-the-odds comeback of Sugar Ray Leonard.


Katherine Dunn's articles are wonderful lessons in deconstructing the boxing business and the boxers for the benefit of the non-fan in a way in which the aficionado can appreciate. They also serve as an historical record of the times during which the writer has covered the sport.


And yes, one thing Dunn’s collection does confirm in the mind of the reader is that boxing, for all its deadly seriousness as a combat sport and its attendant poisonous issues, is one hell of a storming circus.