A Night at the Fights featuring Audley Harrison 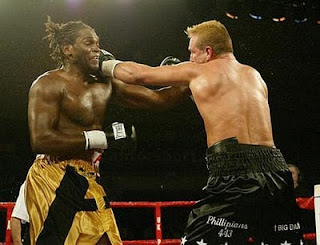 It is often said that an amateur boxer who can perform at the highest levels should have no difficulty transmogrifying into a fighter able to nestle into a position near the world top ten in the professional ranks. Audley Harrison is not the first Olympic champion boxer to attempt to replicate amateur success within the professional echelon.

Modern examples of those who performed this feat famously include Floyd Patterson, Cassius Clay, Joe Frazier, George Foreman and Sugar Ray Leonard. The successes of the aforementioned fighters has tended to put an incalculable burden of expectation and pressure on their generational successors; pressure that surely has contributed to the unravelling of many a talented fighter.

There are notable underachievers and even outright failures. The route to glory is an often laboured and tortuous process. But with a money-spinning contract from the British Broadcasting Corporation and high profile commercial sponsorships, the likes of Harrison tend to inspire an emotive admixture of cynicism, loathing and resentment.

The Super Bantamweight bout pitted Britain’s Esham Pickering against Duncan Karanja, a Kenyan. Pickering, like Herol Graham and Naseem Hamed, is a protégé of Brendan Ingle. Like these fighters he is one who is cast in the swift moving and elusive mould.

However, unlike Graham and Hamed, Pickering lacks the magical properties of Grahams swiftness and Hamed's power of punch. Indeed, he lost to the Panamanian Bantamweight champion, Mauricio Martinez in December of 2000 and so is in the process of rebuilding a career, which started with great ambition. Karanja, tall and gangly, appeared simply not to have enough power to be able to hurt his opponent.

That said, Karanja’s length of reach, superior to the shorter Pickering, ought to have formed the basis of a box and move strategy. But the seemingly inexorable logic of this ploy appeared lost to the Kenyan who was shaken by a stern right administered just before the end of the first round. Pickering knocked him over for standing eight counts in the third and fourth while a let-hook, right cross combination in the third dropped the out strengthened Kenyan in the fifth.

The other commonwealth title bout for Scott Harrisons vacated featherweight title was also between a Briton and an African. Dagenham’s Nicky Cook and the Zimbabwean Misheck Kondowani. Ironic that two individuals from these countries can meet a time when there is much debate about whether Englishmen and Zimbabweans should be able to share the same cricket pitch given the current political enmity of both governments.

The first two rounds were fought relatively evenly although Cooks combinations, ending as they did with right to Kondowani’s ribs, appeared the more jarring than the counters landed by the Zimbabwean. In the third, Kondowani began to make Cook back off and while Cook reasserted himself by working off the jab, Kondowane was apt at breaking his rhythm with swift, accurate counters. In the middle rounds it was Cook who had established the higher work rate with Kondowani catching him out with the occasional right cross counter punch.

The Zimbabwean came back in the ninth when a right hand unexpectedly hurt Cook and was followed by at least four more of the ilk. The bell ended the round with both swapping blows in Cooks corner. A cut appearing on the left side of Cooks cheek served to bolster the Kenyan’s confidence and ignite him to an aggressive mode.

Handicapped by his cut and now backing away, Cook appeared to be facing the prospect of defeat. This appeared to be a distinct possibility given the ferocity of Kondowani’s start to the eleventh. But Cook, his wound, now under a certain amount of control, launched a counterattack and ended the round strongly –if a little raggedly.

The final round began with Cook being the aggressor and Kondowani, seemingly the more winded of the fighters, in a general retreat. Although he was able to muster several counters, referee Micky Vann stepped in fifty seconds from the end and awarded Cook the bout. Although the African camp appeared to accept the stoppage without protest, some fans expressed their surprise.

The final bout, that of Audley Harrison and the blond crew cut American Rob Calloway, was televised live. Stepping out of the obligatory haze of special effects smoke Harrison revealed an enormous sized gold and black trimmed trunks that were drawn up virtually to his lower chest. Harrison moved with all the monotonous deliberation of a person in the process of trying to swat a fly.

"C’mon Audley," called an intemperate voice from the crowd, "throw some punches!" Calloway too, affecting an "Ali wobble" by buckling his knee’s after Harrison landed his most authoritative punch, seemed keen to transmit the fact that he was not impressed.

That, however, was bravado, Harrison bloodying his nose in the third and scoring with a punishing uppercut while in a clinch. This may have been the point at which Calloway’s jaw was broken. The American took a very long time get off his stool at the beginning of the fourth and then failed to come out for the fifth.

The crowd, unsurprisingly, erupted in boos.

Where does this Harrison? By his own admission his performance was "not vintage Audley Harrison but effective." While most focused on his neglect of the jab, which enabled the smaller man to get close and fight at close range, Harrison appeared to insist that his plan indeed was to forego a reliance on the jab and to develop upon other strategies.

However, the power and speed of his hooks appeared a little mundane, albeit that he managed to fracture Calloway’s jaw. Also not impressive was Harrison’s apparent gloating at the knock out loss suffered by British heavyweight rival, Danny Williams to Turkey’s Samil Sam in Berlin that same night. While not untrue to say that Williams has used Harrison’s high profile career launch to bolster his profile by consistently inviting Harrison to challenge him, Harrison lowered the tone by resorting to abusive comments, at one point referring to Williams as a "cockroach".

It is difficult to say just how Harrison’s skills have progressed as a result of this fight, other than to chalk up a ninth career win. Harrison and his manager, the ex-fighter Colin McMillan, are determined to move at their own pace. Were the opponents faced by Mike Tyson or Lennox Lewis in the early parts of their careers any better than Harrison’s his supporters ask? Perhaps not, say his detractors, but while Lewis and Tyson were in the spring of youth, Harrison, who will be thirty-two this year, they argue does not have time on his side.

Time, as the saying goes, will reveal who is right.