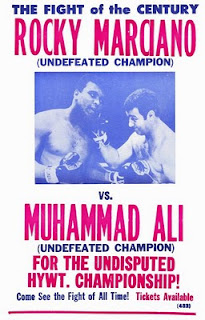 Boxing as a sport, has through the ages, provided the fulcrum for much heated debate and contested analysis. Standard among this tendency to polemize is that which matches fighters from different eras against each other. The question always is, 'How would this great fighter shape up against this other great fighter?' Where some would be content at estimating which boxer was the 'best' during a particular era, others cannot resist the impulse of bridging the time barrier.

The modalities informing such debate would typically involve estimating the fighter's 'quality of opposition,' solidity of chin; that is, his ability to withstand punches, stamina and endurance, punching power, defensive capability and so on. While such arguments were restricted to drinking dens, boxing magazines and the sports pages of newspapers, the rapid development of technological facility, specifically in regard to the enhancement of the capabilities of computers, would add a new dimension.

The specific 'match' between the two heavyweight champions had its roots in a radio programme devised by Murray Woroner, a boxing promoter from Miami, which pitted heavyweight boxing champions from disparate eras in a series of elimination contests which led to a 'final' and the crowning of a 'Champion of Champions.' Muhammad Ali, the then exiled world heavyweight champion took great offence at being 'defeated' by James J. Jefferies and in fact sued Woroner for defamation of character.

A major part of the settlement involved Ali agreeing to participate in a computer match pitting him against the fighter who won the series of contests on Woroner's radio programme; Rocky Marciano. While a computer would be the arbiter of who would emerge victorious, the difference here would be that the 'confrontation' between Ali and Marciano, would be visualised.

This added a crucial dimension in attempting to make a match appear to be 'real;' something which could not be provided by the radio shows or from watching bips on a screen as both Dick Tiger and Roger Rouse had to do on the eve of their world light heavyweight confrontation in 1967 when an IBM 3360 Modal computer fashioned out a prediction of the outcome of their fight based on 2,700 items of information.

Marciano and Ali were a study of contrasts. Marciano was a 'brawler' while Ali was a 'boxer.' Where Rocky was circumspect and humble, Ali was both talkative and prideful. One was short and the other was tall and within the maelstrom of the 1960s the difference in their racial origins took on an added significance because other than the briefly tenured Ingmar Johansson, Marciano was the last 'white' champion and certainly the last great white champion in a sport then set to be dominated by Americans of African descent.

In the 'Superfight', Marciano who was undefeated in a 49-fight career would be taking on the then undefeated Ali, a member of the racially separatist Nation of Islam who had been dispossessed of his heavyweight title by a vengeful white establishment. Yet, the promise offered by the computer was the notion of neutrality; that scientific empiricism would overcome the issues of time and age not to mention maintaining an aloofness from the emotive matter of race.

The DVD is divided into two parts. One is the 'SuperFight' itself and the other is an accompanying documentary produced by Michael DeLisa, founder of cyberboxingzone.com and the author of Cinderella Man. The putative contest between Marciano and Ali is certainly a curiosity piece; being at once real and surreal. There is realism at the sight of 'El Matador,' Muhammad Ali circling and jabbing at the 'bull' figure, Marciano.

At 46 years of age Marciano is plausible because he is slimmed down and wears a deftly fitted toupee. While the rules of engagement stipulated that both parties pull their head bound punches short, both were allowed to be more robust in regard to their body punches -an edict taken to heart by Rocky who appeared not to have held back in certain interludes where he targeted Ali's midriff. The factors tending to be reminding of the artificiality -if not outright superficiality of the endeavour, include the smallness of the ring and the canned noise of 'spectators.'

The documentary itself has a certain amount of freshness due to the preponderance of a range of articulate and highly knowledgeable persons associated with the cyberboxingzone which tends to relieve the typical boxing aficionado of the sight and tones of a coterie of boxing experts who arguably have been overly used in this sort of enterprise.

That said, the presence of Burt Randolph Sugar; 'Damon Runyonesque' with cigar in hand along with his biting wit and erudite sense of irony may, depending on perspective, serve either as an irritating continuum of the old order or the presence of a recognisable 'safe pair of hands.'

Among the interviewees are the son of Woroner, who recalls the financial gambles undertaken by his father as he pursued his dream of staging the contest and the younger brother of Marciano who relates the story of the older champion sharing a fruit with his younger counterpart as they discoursed on the 'race issue;' at that time a literally combustible matter and like the Vietnam War, threatening to tear the nation apart.

It was Rocky, Peter Marciano reminds us, the world champion during Ali's adolescence, who Ali credited as been most responsible for heightening his determination to achieve the grandeur of being the world champion. As a young boy in Louisville, Ali remembered the excitement of championship fight night and the reverential gusto of the ring announcer's declaration: "And still heavyweight champion: ROCKY MARCIANO!"

Although the documentary becomes somewhat bogged down with a detailed series of segments from the computerised fight; in the process curtailing the flow of the narrator and sequence of interviewees, it still manages, consistently, to hold the interest of the viewer with an informative interspersing of archival footage with anecdotal and analytic commentary. The DVD is well packaged with an accompanying collector’s booklet.

Marciano 'won' the contest -although an alternate ending was filmed in order to accommodate the final prediction- and Ali referred to Woroner as a racist, blaming his 'defeat'. on a computer "made in Alabama." Those comments led to Woroner instituting proceedings against Ali for defamation of character. The irony of the contest being conceived as part of settling a defamation suit started by Ali and ending with a suit by Woroner would not have been lost to either man.

It is of course not the end of the specific argument of who would have bested the other or to wider arguments as to which heavyweight champion's abilities transcend time. That will be continuing in pubs, in boxing magazines, books and Internet messageboards for the foreseeable future.