Book Review of Battling Siki: A Tale of Ring Fixes, Race, and Murder in the 1920s 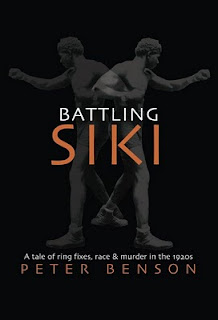 The written word is a most powerful tool. It has the capacity to mould, shape, build and destroy the reputations of both the living and the dead. But if there is any grain of truth to the cynical adage that historians are granted a power denied even to the gods; that is, to alter what has happened, then it is perhaps also true to aver the inverse proposition that historians are invested with the power to re-mould the distortions and alterations of the past. Such was the task faced by Peter Benson, an American academic, in his work on the first African to win a world title, Battling Siki.


Born Amadou M’Barick Fall of the Wolof people in the French West African colony of Senegal, Siki made history when he mauled the world light heavyweight champion George Carpentier to defeat in 1922. He would continue to make headlines in the three years that remained of his life, many of which were not for the right reasons and many of which were manipulations of the facts.


The story of Siki, transmitted through the pens of contemporary journalists and echoed through the decades by essayists, may in fact be one of the most troubling misrepresentations in the history of the sport.


The commonly held perception of Siki has persistently alluded to his been a ‘child of the jungle;’ a feeble minded and uncivilized interloper unable to properly comprehend and adjust to his existence in a ‘civilized’ environment.


This is the man, after all who defended his title against an Irishman on St. Patrick’s Day in Ireland and promptly lost. The man who only beat Carpentier in a freak explosion of primitive inspired fury. A man, who was overly fond of a drink and by virtue of his uncouthness, facilitated his own death in a Hell’s Kitchen gutter in 1925.


But Benson’s research challenges this. Far from being the uncultured ‘child of the jungle,’ Siki was a man who spoke several languages including French, Dutch and English.


And contrary to the postulated naïve buffoon who unwisely put his crown on the line in Ireland, Benson depicts Siki as a fighter in need of a healthy fight purse which was denied to him after he upset Carpentier.


Indeed, Siki’s excursion to the troubled and battle scarred environs of the newly independent Irish Free State was done under the desperate plight he found himself in because of the racially motivated backlash which saw him banned from fighting on the European continent and on British soil.


Benson’s work also confirms beyond doubt that Siki’s apparently sudden destruction of the ‘Orchid Man’ was based not so much on a fluke, but was down to Siki’s decision to abandon a script which had been designed to assure Carpentier of victory.


When he came to fight in America after losing to Mike McTigue, the perception that he was overanked gained credence with his points losses to Kid Norfolk and a rising Paul Barlenbach. Yet, the evidence appears to be that Siki’s career derailed not so much due to the paucity of his pugilistic skills as it was to the ineptitude of his American manager.


Of course, Siki played a part in his own downfall. He liked to party and he often neglected to train, but he persevered on more than natural talent having learned his trade as a pre-World War One fighter in the sporting halls of Marseilles and Toulouse, beginning when he was barely into his teens.


He was a highly skilled operator with a penchant for what contemporarily would be termed as showmanship on par with the antics of Muhammad Ali, but which was misconstrued in his day as a manifestation of his primitiveness.


His courage was undoubted; winning the Croix de Guerre and Medal Militaire when fighting in the battle trenches of France, Turkey and Romania.


But while Siki was able to survive fighting in a war in which tens of thousands of his fellow Senegalese laid down their lives on behalf of the French empire, he was unable to avoid a brutal death, persuasively argued by Benson to have been the likely work of the Hell’s Kitchen Mob who may have had him murdered in retaliation for his not going along with a fix in one or several bouts.


There is much to marvel about in relation to Benson’s book, not least of which are the depth and breath of his research and his eloquent and engaging style of writing. It is less of a rebuke and more of a reminder to note the author’s error in referring to the ‘Rumble in the Jungle,’ Muhammad Ali’s 1974 heavyweight title fight with George Foreman as having been the first of its kind on the African continent; that honorific, of course, belongs to the world title bout staged eleven years earlier between Nigeria’s Dick Tiger and the American Gene Fullmer in the city of Ibadan.


That, however, is but a minor blip in this authoritative and incisive book. Peter Benson’s achievement is to empirically question and re-assess the interpretations of the past and in so doing has cast a light into the dense and dark labyrinth of obfuscations and distortions, whether deliberate or unconscious, about the life and significance of the man Louis M’barick Fall, the boxing pioneer, Battling Siki.