A Night at the Fights Featuring Takaloo 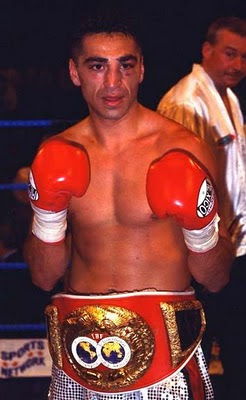 The name Mehrdud Takalobighashi is doubtless not one that resonates with any scintilla of familiarity in the boxing world at large. However, shorten the surname, then narrow the geographic scope and Takaloo, an Iranian-born but British bred fighter based in the English seaside resort town of Margate, assumes a higher level of recognition.

Takaloo, in fact, is currently one of the more popular figures among the British fight fraternity. Fighting in the light middleweight division, he is already a two-time "world" champion; title holder, that is, of the WBU belt. Slick boxing and powerful punching are the hallmarks of the 28-year-old whose fights are trailed by a merry band of fanatical supporters.

His opponent on the twenty-fourth of May at Bethnal Green's York Hall in a Sports Network sponsored promotion was the Dominican veteran, Josa (nee Jose Jaoquin) Rosa-Gomez.

Rosa entered the ring first, attired in a blue robe. With his eyes firmly shut and a picture of concentration, he sank to his knees and raised his arms to assume an evangelical pastors pose, all the time busily, and noisily chanting a fevered mantra of prayers as if summoning the intervention of the Gods.

The bass thud of dance rhythm and the wild acclaim that signaled the coming of Takaloo only succeeded in bringing about an intensification of Rosa's hyperactive gesticulating.

The fight began with an almost surreal silence, a temporary lull to the wall of sound that was re-ignited as the fighters shortened the distance between themselves and the crowd sensed the imminence of the opening punch by Takaloo.

Rosa-Gomez, a stocky, sullen-eyed warrior who bears a passing resemblance to the immortal Beau Jack, pressed forward aggressively, trying, as he would continue to do for the fights duration, to unsettle the champion. Takaloo, however, boxing in as relaxed a mode as possible, floored Rosa-Gomez with almost effortless ease.

The crowd would have been forgiven for thinking that Takaloo was about to score the fourth first round stoppage in his twenty-fourth contest as a professional. It was not to be, for Rosa-Gomez was pushing and prodding Takaloo into the ropes as the bell ending the round sounded.

In the second, Rosa Gomez caught Takaloo on two separate occasions, each shot bringing, a collective chorus of "Ooooh!" But in the spells of exchanges that ensued after each, Takaloo calmly picked off his lunging, wildly flailing opponent and he was very quick in lifting up his right hand as an effective defensive wall to block the Dominican's left hooks.

In the third he caught Rosa-Gomez with a strong right. Again, given his reputation, the crowd sensed the beginning of the end of the Rosa-Gomez's challenge but his legs did not fail him, even scoring with a long punch that caught the champion at the side of the face. Nevertheless, Rosa-Gomez finished the round with a cut that had opened up on his right cheek.

The highlight of the next round was an uppercut, which shook Rosa-Gomez. At one point, the challenger turned round seemingly thinking that the referee had sanctioned a pause and Takaloo quickly went on the attack literally running a few paces before engaging Rosa-Gomez in an exciting exchange that roused the crowd.

Both men punched the others glove before making their way back to their respective corners. The remaining rounds were characterised by the wild swinging forays of Rosa-Gomez and the deftly executed counter punching of Takaloo who in one episode skilfully avoided each of the Dominicans crude salvos to the acclaim of many in the Hall.

The unanimously rendered verdict was overwhelmingly in Takaloo's favour:118-109, 120-107 and 120-107. Yet, Takaloo's action, moments earlier, of going over to Rosa-Gomez's corner to invite the crowd to applaud the visitor was indicative of how tough a fight it had being for him.

At twenty-eight years of age, Takaloo's ambitions appear somewhat tempered; even sober. There is no talk of taking on the likes of Oscar De La Hoya, Fernando Vargas or Sugar Shane Mosley. No verbal broadsides, either to Richard 'The Secret' Williams, Britain's holder of the IBO version of the light middleweight title.

Instead, his immediate priorities consist of acquiring the British passport that will, according to a passage of the fight program, enable him to 'travel to the US to spar with the best in the business, and finally challenge for the British title.'

Also featured on the bill was the professional debut of Haider Ali, the Pakistani winner of a gold at last year's Commonwealth games. Haider, won a close (39 to 38) points verdict over the London-based Ugandan, Buster Dennis. It was not a popular decision as boos erupted around the hall when the referee held Ali's hand up immediately after the bout and again after the scoring was officially announced.