A Night at the Fights with Ted ‘Dangerous’ Bami 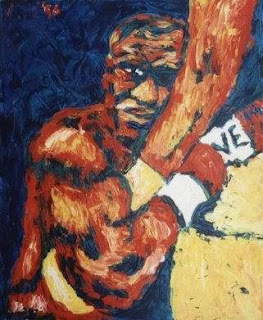 The Democratic Republic of the Congo, the former Republic of Zaire, is not noted for having substantive underpinnings in relation to marquis of Queensbury rules boxing. Save for the highly competent middleweight Sumbu Kalambay, who fought at his peak in the latter part of the 1980’s and who suffered a devastating one round knock out loss to Michael Nunn, no fighter from that part of the world has come close to setting the game alive. There are historical reasons for this. It will not have escaped the discerning observer that many of the sporting achievers from the African continent in the fields of athletics, football and boxing to name a few have come from Anglophone nations such as Kenya, Ghana and Nigeria.

The colonial regimes imposed by the British tended to place a great emphasis on physical endeavour within the academic curriculum they devised for the nation states they created and such structures have tended to survive, albeit in the often times haphazard circumstances of the political and social instability that has consistently plagued the continent.

Ted Bami, a light welterweight of Congolese origin, is based in the south London suburb of Brixton. His predecessor Kalambay saw fit to leave the shores of his native land during the relatively stable but highly corrupt and inefficient administration of Mobutu Sese Seko, and head for Italy. Today, as the Congo continues to endure tremendous shortages in basic amenities due to wars raging around its borders with Uganda, Rwanda and Burundi, it would be too much to expect a nation in such circumstances to be capable of nurturing and sustaining sporting talent.

Physically compact, lightning fast in movement and carrying power in his fists, Bami is a skilful fighter who catches the eye. After decisioning the Russian Sergey Starkov by forty points to thirty-six in a four round bout at Brentwood last December, he stopped Andrey Devyatakin in the first round last month at East London’s York Hall. It was to this illustrious of venues that Bami returned on April 12 2003 to engage the Hungarian Vasile Herteg for the vacant WBF light welterweight championship. Entering to much acclaim from the crowd including a vocal contingent of Congolese expatriates, Bami’s demeanour bespoke of a fighter with a great deal of confidence.

His movements in the first round were characterised by a sense of ease and assurance. On first sighting him in December of last year, this writer had noted that Bami was "solid, strong, straight postured fighter possessed of a repertoire of combination punches most notable of which was left hook followed by right upper cut manoeuvre." As with many fighters who move their hands with astounding rapidity, Bami, who fights while utilizing an orthodox stance, often holds his left hand from a lowly angle while his right glove is no where near his chin.

He is, however, quite adept at covering up at moments where pressure is applied. Herteg, the taller of the two men used all the tricks at his disposal to stall Bami’s attacks with an octopus like grip and to bull forward at intervals. It may indeed have been a deliberate ploy of the Hungarian to hurt Bami with a blow to the groin, which necessitated a short time out in the second round. Bami did find success in the third when he hurt Herteg some short, powerful uppercuts during the close fighting, yet this was a rare burst of success amid the shrewd and ‘ugly’ spoiling tactics of the Hungarian who was able to fight at moments of his choosing.


Perhaps heeding a ringside entreaty for him not to chase but to "cut the ring", Bami began, from the fourth round, to catch Herteg with well picked shots. Several of them were hooks that were delivered to choice locations around the head and body. Herteg by now was running away and out of ideas. In the fifth, a long right stunned the Hungarian and Bami was able to land a powerful straight right just as the bell was ringing to end the round.

The subsequent rounds were characterised by Bami chasing Herteg around the ring, catching the Hungarian ominously with the left hook but frustratingly, failing to finish his opponent. The coup de grace, a ferocious left hook, materialised in the ninth round. Herteg was stopped in his tracks and although his legs kept him up, the referee felt compelled to stop the fight.


The headlining bout between Dean Pithe and Craig Docherty for the commonwealth super featherweight championship ended in a surprising but well deserved eighth round knock out victory for Docherty. Also on the Barry Hearn promoted bill was the Polish heavyweight Albert Sosnowski who overcame a debilitating gash at the side of his eye to win a fifty-nine to fifty-six points victory over the Briton Michael Holden.