A Night at the Fights Featuring Richard ‘The Secret’ Williams 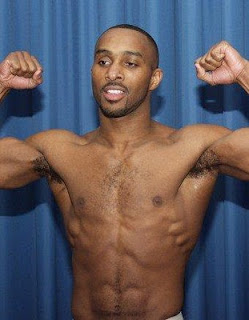 Richard Williams goes by the moniker ‘The Secret,’ an allusion perhaps to his lack of fame or possibly his potentiality for unleashing a sudden and decisive powerful punch or even his ability to devise a sagacious strategy. But whatever it is, it would appear that he is a more than competent fighter, adept at executing the fundamentals of the game of pugilism.

Williams was one of three IBO and WBF "world championship " bouts promoted by Barry Hearn’s Matchroom Sport. Williams took centre stage in between bouts involving Light-Welterweights Gary Ryder of Liverpool and the Argentine Pablo Sarmiento, respectively the WBF and IBO champions and Colin Lynes and the South African Samuel Malinga who fought for the IBO Intercontinental Light Welterweight championship.

Gary Ryder, compact, exceedingly muscled and shaven headed, showed for only fleeting passages of the first round a rounded ability that hinted at more than raw power. His Argentinean opponent, Pablo Sarmiento although weighing in at the championship limit, looked deceptively fragile but from the second round assumed control of the bout with seeming ease pawing out a jab, showing Ryder angles and frustrating his British opponent to the extent that Ryder was forced into miss timed lunges and stumbling into right hands.

Sarmiento moved with consummate ease, cutting Ryder who became embarrassingly bereft of ideas as the fight wore on. The referee called the ring doctor on two occasions before preventing Ryder from resuming for the ninth round.

The match between Colin Lynes and Samuel Malinga was intriguing. Lynes went into the bout with his record intact while Malinga, part of what appears to be a bourgeoning South African boxing dynasty, was, the press cautioned, not to be underestimated. Malinga’s pre-fight demeanour as he stretched and shadow boxed in his corner betrayed not a scintilla of fear or foreboding.

His confidence and relaxedness carried over into the first round during which he prodded and probed after Lynes with a long left. In the second, Lynes showed skill by evading successive jabs with head movement and then when temporarily trapped against the ropes and harangued by a swift combination by Malinga, bounced off to riposte with stunning combination before making good his escape. The crowd roared. It would be a rare moment of success.

Malinga’s work rate was extraordinary. He had Lynes nose bloodied by the sixth by which time Malinga’s incessant, pawing jab was pushing the at times raggedy Englishman from the proverbial pillar to post. In the seventh, bereft of ideas and both cheeks swollen to the extent that his eyes now appeared as slits, Lynes was dropped near his corner by a left hook.

Lynes listened intently to the count and got up to his feet when it reached eight. Then Malinga hurt him with a right and later in the round caught him with a punishing uppercut after repeatedly pushing Lynes to the ropes as a prelude to finding his striking range.

Although, Lynes remarkable stamina enabled him to adopt a knock out evading "hit and run" strategy to survive the eighth, the occasional jab and cross to his face compounded his physically deteriorating state. Indeed, the referee, acting on the advise of Lynes' corner, would stop the bout before the sounding of the ninth.

The first round between Richard Williams and Andrey Pestryaev started off tentatively. Williams appeared to be the more assured and relaxed of both putative champions moving with consummate assuredness and executing a straight jab-cover-left hook strategy. The Russian, refused to be overawed and scored with an occasional breakthrough punch. In the fifth, Williams stunned Pestryaev who immediately chased after him.

But Williams calmly stepped back to the ropes where his quick, elusive head movement diffused Pestryaev's surge. He caught Pestryaev with two significant though not especially debilitating punches before the rounds end. Pestryaev was again shaken in the eighth after a right by Williams, the final punch of a combination, which pushed the Russians head backwards.

The crowd roared, sensing that Williams had now perfected the range and was now primed to deliver the coup de grace. This did not happen in the ninth but crowd interest in a possible knock out of Pestryaev was reawakened by two brutal right hooks, which visibly weakened him.

A second onslaught had the same effect yet while his upper body wobbled his legs held firm. "Body's finished, but legs are there," as one member of the audience intoned.

There are those who are willing to pour scorn over Nigel Benn’s comments that Williams is the new Michael Watson. Some would opine that he is over-rated. Certainly it could be argued that there is a tendency for Williams to be at times overly cautious; this, his habit of stepping back and pausing after hurting his man, as though admiring his efforts instead of going in for the kill.

But then, how many fighters have become unstuck after unwisely throwing caution to the wind when a blow they have delivered has rendered their opponent in apparent state of distress? There is much that is going for Williams.

He is well balanced, moves well and carries a fair amount of power in his left hand. What remains to be seen is how he reacts when a different calibre of opponent, one of genuine world class pedigree, pressures him like he has never been pressured or hits him squarely in one of the vulnerable locations of the fighter’s anatomy.

A bona fide world champion he is not, at least for now, but there is an aura, a sense of promise about the future of a man who should remain no longer a secret to much of the boxing world.
Posted by Adeyinka Makinde at 01:17